If you haven’t figured this out by now, I happen to have an opinion on everything. Whether it be National Parks, newspaper articles or art, I probably have some kind of extreme opinion on it. Therefore when it comes to a disappointing travel destination, I feel obligated to put up billboards and caution tape all...

If you haven't figured this out by now, I happen to have an opinion on everything. Whether it be National Parks, newspaper articles or art, I probably have some kind of extreme opinion on it. Therefore when it comes to a disappointing travel destination, I feel obligated to put up billboards and caution tape all over it as to warn the wayfaring adventurer. So here we go with another one of my lists- the most overrated adventure travel destination in America.
I'd like to preface this list with saying that I'm sure lots of people have wonderful experiences when they have visited these places. I'm not anti-business and I'm certainly not saying that you can't have a good time at these destination. However, as an adventure traveler and lover of wilderness, I would certainly not recommend them to anyone who is of a similar ilk. So, take it with a grain of salt.
Niagara Falls, New York/Ontario
I've never been more disappointed by a supposedly beautiful display of "the power of nature". As a stand alone destination, the falls are a pretty sight but they are violently marred by high rise hotels and 25-dollar-an-hour-parking not to mention a whole host of tour buses and a complete lack of hiking trails. I had come to Niagara Falls from the Canadian side while on a cross country road trip and the traffic was worse than any rush hour. By the time I found a parking space four miles from the falls, I was so utterly disgusted by the impossibility of driving that the falls just weren't worth the effort. Of course, if you want a good view of the falls, you have to jockey through the other hundred thousand people trying to do the same. 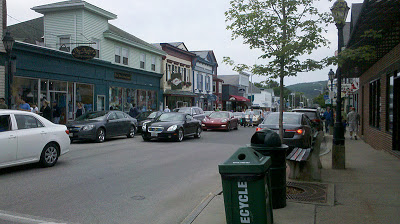 Bar Harbor, Maine
Bar Harbor is one of those small cities in denial that desperately tries to cling to their previous status as a homey, small town. Pictures of Bar Harbor make it appear as if its still one of those quintessential Maine lobster-towns but in the summer its a metropolis. I visited Bar Harbor for the first time via kayak as I was on another 100 mile trip up the Maine coast. After having kayaked through beautiful Stonington and the rugged, lesser traveled side of Mount Desert Island I finally made it to Bar Harbor and was thoroughly disappointed. It was like enjoying an incredible five star dinner only to have stale cake for desert. In my discussions with native Bar Harbor-ians, they confirm my suspicions that visiting in the summer is a nightmare. The real truth is, you can do so much better if you really want to see the coast of Maine.
There are still several small Maine coastal towns that remain relatively undiscovered. Here are my recommendations.

Garden of the Gods, Colorado Springs, Colorado
Garden of the Gods is unfortunately a great climbing destination that's too crowded and too close to an ultra-active city full of climbers. Again, in itself its a great place to climb and hike but expect traffic jams on the routes and trails. Its actually a very well-managed park with a history that out dates most of our National Parks. But herein lies the problem- EVERYONE in Colorado climbs! So when you have a great destination that's 10 minutes away from a city, the routes get crowded and the trails are a traffic jam of trail runners. In addition there's the normal influx of visitors who just want to walk around and take pictures. The park is also rather small. For me, this just didn't jive with my tenancies. I'd much have preferred Joshua Tree which receives a similar amount of climbers but is literally over 200 times larger.
Mt Washington, New Hampshire
Well, I wouldn't be the first pretentious outdoorsman to complain about Mt Washington, but no list of uninspiring destinations would be complete without mentioning the highest parking lot in the Northeast. Truthfully though, everything but the summit is nice on Mt Washington. If you take any route other than the infamous Tuckerman's Ravine, you're likely to actually enjoy some peace and quiet.
You could always see the better part of the White Mountains by doing the Presidential Traverse!
Oahu, Hawaii
To travel all the way across the Pacific Ocean and only visit Honolulu and Oahu is like flying all the way to Las Vegas just to play the slots in the airport. The city feels cramped and sprawling and its hard to find a place big enough for a towel on the crowded Waikiki Beach. Of course, there are other destinations on the island but really nothing that you couldn't see on another island. Oahu, by Hawaiian standards, is bland; it doesn't have the incredibly variable topography and environment that Maui and the Big Island have nor does it have the "Grand Canyon of the Pacific", lush rainforest and massive cliffs that Kauai has. Of course both the ancient and military history of the island are worth experiencing, but you're cheating yourself if this is the only island you visit in Hawaii.
Avalon, Catalina Island, California
Catalina Island will always be near and dear to my heart except for the city of Avalon. Located 26 miles off the coast of Los Angeles, the island provides a great escape from the hustle and bustle of the city. Avalon is the destination of most passenger boats and cruise ships so its grown quite a bit. To me, the city is a great place for starting an adventure or functioning as a base camp. Catalina has a plethora of hiking, diving, snorkeling, mountain biking and kayaking adventures but you have to step out of Avalon. I'd highly recommend Two Harbors, on the other side of the island, instead. Its much smaller and more laid back- like a little Margarittaville. Its also much easier to get to the wilder parts of Catalina Island from Two Harbors.
Instead of Avalon, try backpacking or hiking the Trans-Catalina Trail!

Tired of overrated places? Check out some lesser known destinations-

Most Underrated Destinations in America

Traveling is not just seeing the new; it is also leaving behind. Not just opening doors; also closing them behind you, never to return. But the place you have left forever is always there for you to see whenever you shut your eyes.