After traveling almost 200 miles along the coast of Maine by kayak and even more by car and foot, I believe I’ve discovered some of Maine’s best small seaside villages. Here’s my take on weekends, vacations, or just a pleasant day out to a REAL lobstertown! Stonington, Maine Alright so I don’t write for Downeast...

After traveling almost 200 miles along the coast of Maine by kayak and even more by car and foot, I believe I've discovered some of Maine's best small seaside villages. Here's my take on weekends, vacations, or just a pleasant day out to a REAL lobstertown!
Alright so I don't write for Downeast Magazine and I'm not a native Mainer but I've been to almost every little town on the Maine coast from York to Lubec. I've done enough traveling to know the difference between what's authentic and what's just a plain tourist trap. Best of all, I've kayaked almost 200 miles of the Maine coast so I think I have a valid opinion when it comes to deciphering the true Maine towns worth visiting!


I should preface my guide by saying that these towns are NOT DISNEYLAND! If you're looking for some place flashy, easy and full of cars and people, well... there's a hundred other places to go for that. These towns are small, off the beaten path and for those looking for a pleasant place to relax for a day or weekend. Most of them are quiet, rustic, historical and small which is appealing to the adventure traveler. In leaving the conveniences and amenities of modern living behind, I hope you can discover a slower, gentler, and stressless way of life on Maine's coast.


This is my list of the best small towns in Maine that are worth a day trip or an extended stay. I would like to note that this is A list, not THE list. But if you're looking for something less touristed than Bar Harbor, might I recommend the following...
#1 Stonington, Maine (Downeast)


God, I love Stonington! I've kayaked in an out of here several times and I've enjoyed this place more than any other Maine town. Although its easily accessed by state highways, Stonington is located on Deer Island and as such, you are on "Island Time". Island Time is the nebulous way of looking at time; the only important times are sunrise and sunset. Nothing in Stonington open or closes with any real predictability- a beautiful thing.


I had one unscripted conversation which put Stonington in perspective. Just before a kayak trip, I parked my car and asked one of the store owners if it was okay to park on the street for a couple of days. She replied, "Well... we don't have cops and we don't have tickets. Park wherever you want." The way life should be!
﻿This is an excellent town to come and simply relax by the ocean! I'd recommend doing low budget things like waking up early and just watching and listening to the lobstermen ready their boats. Or you could grab some lunch at one of the couple of hotels on the shore! Also, Isle au Haut is accessible through a ferry that leaves from Stonington. This in itself is an excellent day trip and a chance to see the wild side of Acadia National Park! Lastly, I'd highly recommend paddling out to one of the hundreds of islands nearby Stonington. Most are publically accessible and great places to have a picnic. Again, its a wonderful place for a low-budget weekend getaway or adventure travel!
#2 Lubec, Maine (The most Downeast town in Maine)
(pronounced Lou-beck)


Ahhhh, Lubec! This tiny lobster town has the honor of being America's Easternmost Town! I've found that even native Mainers have never heard of it despite its significance. If I could, I would proclaim Lubec as "America's Greatest Sunrise". As the easternmost town, it is the first place in America to see the sunrise. I met some native Lubecers (Lou-beck-ah's!) who remarked that they have the duty of "propin' up the sun ev'ry mornin'!" If you want to catch that glorious sunrise, head out to West Quoddy Head State Park!
There's a couple other things you can't miss in Lubec. Although technically in Canada, Roosevelt Campobello International Park is a must-see. Make sure you bring your passport because its technically in New Brunswick. I say technically because this park is managed by both the US National Parks System and Parks Canada. President Franklin D. Roosevelt spent many a summer on this picturesque island and many early 20th century houses are preserved.. It is both a good historical park and a hiking park. I loved simply walking along the shores of the Bay of Fundy which has the largest tidal range in the world. Oh and of course, don't forget to eat a lobster back in Lubec; aint no fresher lobster!
#3 Vinalhaven, Maine (Penobscot Bay)


This is a true island town and can only be accessed by boat! Although its on an island, it is large enough to bring a bike and explore the interior. Like Stonington, Vinalhaven is primarily a lobster town and it is very enjoyable to simply watch the lobstermen do their work. Also, since it is isolated from the mainland, its not nearly as touristed. Yet there are plenty of basic amenities to make for a weekend getaway.


As a major adventure traveler, I have to recommend spending most of your time outdoors. My favorite activity is of course, kayaking. Vinalhaven is close to many small islands that are within a half a day or full day trip out. Kayaking is perhaps the most authentic experience you can have on Vinalhaven. However, the island is large enough to bike as well! I've never biked it myself, but I hiked around the islands many roads and it is quite hilly. You might want to consider bringing a mountain bike! 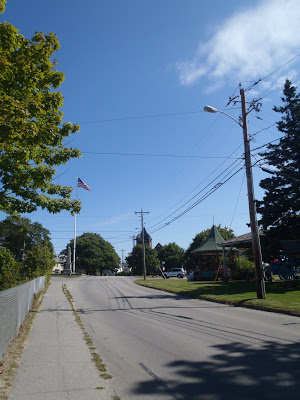 Other recommendations... whilst wandering about Vinalhaven I grabbed an excellent cup of coffee at the ARC Cafe which is located just off the main drag on High Street. After fighting the currents for half a day, it was nice to cozy up on a couch and enjoy some coffee! There are some interesting little shops on main street but I would recommend just taking a walk throughout town! Its historical and quintessentially Maine-ish. Don't come expecting Disneyland but come expecting a wonderful place to relax, think and slow life down for a while.


Similar but smaller than Vinalhaven, North Haven is just north of Vinalhaven. It has less fame than Vinalhaven but its a unique experience! This town has a year-round population of about 350 people and I imagine that most of them are lobstermen. The nice part of North Haven is that everything is within walking distance of the ferry.
I don't mean to sound repetitive, but wandering around town and the island was my favorite activity! The Maine Islands are similar in ecology but each has its own feel and culture. North Haven is a small but proud community and equally friendly. Although its doesn't have as many services as Vinalhaven, I appreciated that the harbor was a real working harbor. There are shipyards and lobster depots primarily, the tourists come second! Due to its location in the central part of Penobscot Bay, the sunset here was glorious and not to be missed!

I'd recommend making a day trip out of a visit to North Haven. Here's information on the ferry.
#5 Isle Au Haut, Maine (Acadia National Park)

Just south of Stonington and only accessible by a mail boat, Isle Au Haut is the best and least crowded part of Acadia National Park. Isle au Haut is an island and town and has a significant amount of hiking trails. Isle au Haut is like Mt Desert Island in that it is managed mostly by Acadia National Park and there is a large network of hiking trails. This is the real allure of the island- uninhibited hiking! The people that you meet here are likely to be similar adventurers who want to avoid traffic jams on the trail.

While the other towns I've mentioned are great for a pleasant stay in a local hostel or motel, this island is best enjoyed through some old-fashioned camping! Duck Harbor, the only campsite on the island, is the one campsite on the island. Be aware that the hike from the town of Isle au Haut to Duck Harbor Campground is 4 miles! This could make for a relaxing backpacking trip as there are several other hiking trails on the island.
Isle au Haut does have an inn and a small general store but most people come for either a camping trip or just the day. This is a lobster-town too, but not as much as Stonington and North Haven. There is also a nearby lighthouse- Robinson Point. This is a pretty lighthouses but it is not publicly accessible. Here is the website for Isle au Haut and information on the ferry and accommodations.

Well I hope this has been a helpful guide to some of the lesser-known island towns and smaller villages of the Maine coast! Happy exploring!