A 90-mile Kayaking Adventure on the Maine Island Trail﻿ At least the first day was nice! ﻿Wow, that was epic… in the truest sense of the word. It was everything an adventure could be and should be. In some ways it was the greatest trip of my life, in other ways it was absolutely miserable...

A 90-mile Kayaking Adventure on the Maine Island Trail﻿

﻿Wow, that was epic... in the truest sense of the word. It was everything an adventure could be and should be. In some ways it was the greatest trip of my life, in other ways it was absolutely miserable and frightening.
A little background... The Maine Island Trial is a kayaking trail that goes from Portland to Manchias, Maine. (Portland, Maine, that is!) Last year I did a 100 mile trip across and around Penobscot Bay which included Isle au Haut, Vinalhaven, North Vinal. That trip was as nice as a trip could ever be: sunny, warm, clear weather and calm seas for 4 days. This trip's goal was to do another 100 mile of the Maine Island Trail from Stonington to Bar Harbor and back. It was quite the opposite of the first.
Day 1: Calm Winds and Fair Seas
As most of these things go, it started off beautifully. I drove up to Stonington Friday night and stayed the night in my car. I awoke the next day excited and anxious to hit the water! Stonington is a small lobster town located on Deer Isle in Downeast, Maine. Its a perfect place to launch; there's hundreds of islands within close distance of the town and its far enough away from the tourists. As a side note, if I had to pick one Maine town to vacation to for a week, it would be Stonington.

View Kayaking from Stonington to Bar Harbour, ME in a larger map

﻿It always takes a while for me to get ready and I set forth at 10:00AM on the first day. Boy was it every beautiful. Coastal Maine is like a northern Caribbean. There are thousands of islands on a jagged coast each inviting exploration and relaxation. The currents were light and I made most of the larger crossing in no time at all. Whats truly wonderful about the Maine coast is that you can island hop as much as you would like- most are state owned or public. I stopped on 4-5 islands the first day; most of the time it was just for the hell of it! Once I stopped and just read my book for an hour. I stopped on another island and drank a beer!
At night I found myself a suitable little slice of paradise on an island no larger than a house; my own private island! Upon this little island I set up a campsite and enjoyed a private sunset over a glassy ocean. I even enjoyed some of Maine's best stargazing on that tiny island. Alas, if only the rest of the trip was as serene!


Day 2: Stormy Weather to Bar Harbor and Back


The next day I awoke to a light fog. It wasn't unmanageable but it did make the going slower. Fortunately it cleared off by 9AM. At this point I began kayaking around Mt Desert Island. This is the main island which Acadia National Park is based on. Its the 6th largest island in the country and is a wonderful place to kayak. I went right under the single bridge that connects Mt Desert Island to the mainland and continued to hug the coast.
One section that I found particularly delightful was the cliffy section just east of Salsbury Cove. This part had 50ft cliff and sea caves with both trees and houses perched on top! This was similar to the Otter Cliffs on the South Side of Mt Desert Island but much more tucked away. The water was clear too, I imagine there's some good diving to be had here.


Unfortunantely after I rounded that last cape on my way to Bar Harbor, the wind and waves began to pick up. Kayaking in the wind is like swimming in quicksand. You know you're going somewhere but its hard to tell, especially on the ocean. That was disheartening but I made it into Bar Harbor. 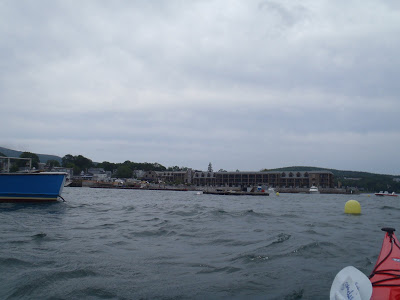 As opposed to the quintessentially Maine-ish towns of Vinalhaven, North Haven, Stonington and Isle au Haut, Bar Harbor was heavily touristed and had the feeling of staleness. I walked into town to resupply on food and it was positively jarring. One moment I'm paddling the free and unspoiled coastal wilderness and the next I'm fighting my way through thousands of ill-prepared tourists complaining about the high price of souvenirs. It was like eating a expertly prepared fillet Mignon for lunch and then going to McDonalds for dinner. I don't mean to complain; Bar Harbor is probably a wonderful place for most but it certainly doesn't suit my tastes! I was happy to leave.


The currents still plagued me but I decided to head back the way I came and enjoy riding the tide for a while. I only had enough time kayak back to the original island I stayed on the first night.
Day 3: Doldrums


I would take 7 days of rain over 1 day of fog. I awoke on the 4th of July to the worst fog I've ever been in. Thinking it would clear off by 9AM again I stayed on my little island until then. It never cleared.... It just hemmed me in. It was imprisoning.


Complaining about it wasn't going to get me closer to Stonington so I set forth into the fog. I had to study my charts like I was preparing for the test of my life. When your on the ocean and on a coast as variable as Maine's, the slightest miscalculation will render you completely lost. My refusal to rely on a GPS has produced good skills with a compass and map though. It was slow, but at least I knew where I was going.
I think the one thing that separates so-called "Adventure Sports" from regular sports is the complete lack of control over most environmental factors. In a basketball court, the environment is tightly controlled, the only variable is the players. The environment in football and baseball the environment can be controlled to an extent... in mountaineering and long-distance kayaking it is not. There's no thermostat on a mountain nor a humidity controller on the ocean.


This is the terrible and wonderful thing about mountaineering and long distance kayaking, the two sports I am most fond of. Most of us like to think we're in control of everything in our lives, myself included. Truthfully, we are in conrol of very little.
The crossing of Blue Hill Bay was the most treacherous crossing of the trip. This is the bay that separates the huge Mt Desert Island from the mainland. Its deep, wide and a lot of water moves through there during the tides. At one point there was a break in the fog and I went for it... only to be turned back 1/3rd of the way through when the fog rolled back in. Twenty minutes later the fog cleared just enough to make it halfway. Once again, the fog came back and I was forced to do 2 nautical miles of kayaking completely blind. That was frightening and disorienting. Its hard to, well, trust your life to a 10$ compass. Nevertheless, it was worth its weight in gold and got me safely across.


Fourth of July night was a miserable night for me. I slept on a beach and could hear the jubilee of fireworks and celebrations off in the distance while I was essentially stranded in fog and rain. The mosquitoes and sand flees were relentless.
Day 4: Back to Stonington


The day started off again with more heavy, thick fog. Once again I was put in the precarious situation of making blind crossings. I was more confident now and thankfully, the fog began to clear after 9AM. I was back to happily kayaking along a beautiful coast! The final crossings were not nearly as stressful and I was able to make it back to Stonington safely and in one piece.
Overall, I believe my abilites as a man-powered mariner have improved. I gained more confidence in my navigational skills and did pretty well in handling the fog. The Maine Island Trail is still a favorite kayaking destination of mine and I plan on returning. However the ocean taught me some harsh realities that I will not forget. If you plan on kayaking the Maine Island Trail, hope for the best and plan for the worst.

After packing up my car and kayak I instinctively plugged my home address into the GPS. It was so simple, I laughed.