“Double or Nothing!” “A challenge in which a successful outcome is assure isn’t a challenge at all”~ Into the Wild, Jon Krakauer Somewhere in the part of my mind that just can’t get enough suffering and misery comes ideas for grandiose and epic adventures! I suppose this is the same part that got me into...

"Double or Nothing!"
"A challenge in which a successful outcome is assure isn't a challenge at all"~ Into the Wild, Jon Krakauer 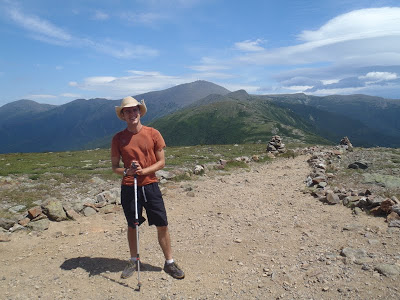 Somewhere in the part of my mind that just can't get enough suffering and misery comes ideas for grandiose and epic adventures! I suppose this is the same part that got me into ultramarathon running and produced my 6,600 mile road trip. Anyways, somehow I got the idea to do the Double Presidential Traverse in two days.
Background on the Presidential Traverse
Peakbaggers in New England speak of their first time completing the Presidential Traverse with the same fondness that they recount a wedding or birth of a child. Its the ultimate challenge of the White Mountains conquered by the few, the proud, and the insane... and quite possibly stupid. The requirements are- to hike all 7 of the Presidential Mountains in New Hampshire in a day. Its a 19.2 mile (31km) affair with about 9,000ft of elevation. Generally its done end-to-end, North to South. For whatever reason, that just wasn't good enough for me...
One wonderful aspect of the Presidential Traverse is that if 19.2 miles and 7 summits isn't enough pain for you, you can always add more! So, just to make it a full 11 summits, you can climb Mt Webster, Mt Jackson, Mt Franklin, and Mt Clay! 22.4 miles and 10,000ft of elevation gain! (these are the types of things that thru-hikers joke about!)

Just to make it Sufferfest 2011, I decided I would attempt to do the Presidential Traverse twice and climb all the major peaks twice in addition to the minor summits. I call it "The Presidential Yo-Yo".
Day 1: Crawford Notch to Madison
I decided to begin at Crawford Notch State Park and begin the ascent towards Mt Webster. It was a brutal climb out of the notch, but I was soon standing atop the summit. There were excellent views of the Crawford Notch that are unsurpassed in the rest of the trip! I climbed back down and a half an hour later was on top of Mt Jackson.
While I was thinking to myself that if I got in a real pinch, I could just stay at one of the Appalachian Trail huts. I mean, its got to be what, 20 bucks to stay there right? Some hikers I met on Jackson let me know that it was 120 DOLLARS to stay a night at the AMC hut! Backpacking ain't what it used to be! Don't get me wrong, the money supports a great cause, but I think the entire cost of my John Muir Trail trip, including permits, food, and campsites was less than $100! I guess I'm just cheap.
Almost the every part of the trail I trod was part of the Appalachian Trail, which made the ordeal a social experience. For starters, nobody acted like I was crazy trying to climb them all... hey, they're thru-hikers! But I met folks from all across America doing the Appalachian Trail. Although they were all doing the same hike, all their stories were different! I was in good company.
Sometime around 9AM I finally made it to Mt Pierce, the first of the true Presidentials. The summit view was glorious and daunting- I could see just how far I had to go. An hour later I was on Eisenhower which had a fantastic view. The going was slow, however. It took at least an hour to reach every summit from the previous one. Franklin was a joke- its a simple exposed notch. Monroe and the sub-peak of Monroe were done at a painfully slow pace. What was really frustrating was that you have to descend anywhere from 500-700ft back down to get to the col of the next mountain! Of course, that's all part of the fun! I stopped in to fill my water bottles at the Lake of the Clouds hut after Monroe and charged up Mt Washington.
Mt Washington was well... Mt Washinton. Lots of people.
The climb down Mt Washington offers views of the Great Gulf and disheartening views of the descents and ascents that lay ahead. Mt Clay wasn't too difficult but it's not technically on the 4,000-footer list so it was a futile ascent. Mt Jefferson was by far my favorite mountain. There is a small area of alpine tundra below the summit that is flat and serene. It reminded me of the John Muir Trail. After descending off of Jefferson, I had to make the arduous climb up Mt Adams.
It was dark by the time I got to the trail up Adams. Not only was it a massive boulder field, it was steep and difficult to follow at night. I confess I nearly lost it climbing Adams. I'd come almost 16 miles and I was dog-tired and frustrated. When I finally summited, it was 9:30 at night and I had an equally challenging descent. It was nightmarishly steep and difficult to follow. Profanities ensued.
I made it down to the Madison hut and decided I had enough for a day and made camp below treeline. I rested well, but a storm blew in at night drenching everything. Fortunately, my pack cover and bivy sack were sufficient.
Day 2: Once more, with feeling...
I awoke to soreness and the all too familiar swollen and excruciatingly painful ankle. I was born with a short Achilles Tendon in my right foot which becomes ridiculously inflamed on my endurance adventures. Its one of those things that's painful enough to set me back quite a bit at times, but not epic enough for an inspiring story (News article- "Man with shortened Achilles Tendon completes Presidential Traverse! Children everywhere encouraged to believe in their dreams!"
I decided to play it by ear and try ascending Madison. The tightness and swelling tends to wear off with time and after the quick ascent, I was on the downswing of my trip. Not surprisingly, the ascent of Adams was a lot more enjoyable in the daytime!

As I was ascending and descending the peaks I had done yesterday, I had plenty of time to think and try and come up with some kind of ultra-philosophical fodder for the blog so here we go...
I suppose one reason for these crazy trips is I like going places. I like being on the move, seeing things I've never seen and discovering something new. I can't run on a treadmill; I get tired in a couple miles. When I'm on an 10 mile run, the miles just fly by! When I'm climbing, the views often overshadow any kind of soreness or misery involved in a climb. Einstein put it best- "Life is like riding a bicycle. To keep your balance you must keep moving."
Another reason would be that these endurance endeavors have developed a mindset that I'm always preparing for something. Be it a future race or some intangible measure of mental or physical stamina, endurance running is an investment in the future. 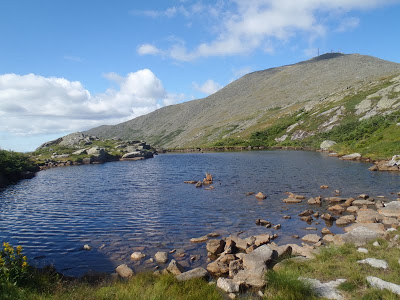 There's not much to say about the second round of the Presi Traverse. After summiting Mt Washington for a second time, it was a downhill roller coaster from there. Monroe and Eisenhower were still challenging, but the down climbing was hard on the knees and ankles. I finally summited Mt Pierce right at sunset. It was a great feeling of accomplishment- 21 summits completed in about 32 hours of hiking. Not the fastest time, but still a great accomplishment. Rather than try and bag Jackson and Webster again, I descended down the Crawford Trail to the Notch. This is actually the oldest hiking trail in America- designed in the 1810's. I'm sure that will some day be a jeopardy question and you can thank me!

That's my story! If you feel you don't have enough suffering in your life and want to do the Double Presidential Traverse, feel free to message me about the finer logistics of the trip. I leave you with one last inspiring quote:


"Surfing and climbing are both useless sports. You get to be conquistadors of the useless. You climb to the summit and there is nothing there."~Jeff Johnson

Quite the accomplishment but try it straight through next time.