Bagging more 4,000 Footers in the White Mountains Every state has its mountain climbing lists. In California, its all about climbing 14ers- mountains with 14,000ft or more of elevation. There’s also California’s 50 finest which encompasses the 50 most prominent mountains of the state. Colorado has a 14er list as well. Up in the Cascades,...

Every state has its mountain climbing lists. In California, its all about climbing 14ers- mountains with 14,000ft or more of elevation. There's also California's 50 finest which encompasses the 50 most prominent mountains of the state. Colorado has a 14er list as well. Up in the Cascades, its all about mountain prominence. At any rate, the big thing up here in New England is the 4,000 Footers and "New England's 50 Finest". Although considerably shorter and less prominent than mountains out west, its a nice list of adventures and even the low White Mountains of New Hampshire can provide enough challenges for this Western boy.
I'd had a rough week filled with too much studying and a couple of disappointments. Basically, I just had to get away from it all and New Hampshire is the place. "Live Free or Die", the motto of New Hampshire, is something that's always resonated well with me and I'm finding the White Mountains to be a serene and rugged place for some solitude and thought. I set forth at 8:30AM and was in the Whites an hour later!
There are 48 4,000 Footers in New Hampshire, an additional 14 in Maine, and 5 more in Vermont. Also, there's 46 in the Adirondacks of New York. One must be economical if they are serious about climbing all 4,000 Footers within any foreseeable amount of time. This requires multiple summits to be done on single trips which can make a nice day hike into a 14 hour affair! So while I originally planned on only doing Wildcat and Carter Dome, I couldn't resist the allure of bagging two more summits by adding an additional 5 miles to my trek.
The first four miles of the Nineteen Mile up to Carter Notch were a gentle ascent through thick forests. Once I reached the notch, I took a right and headed up the trail to Wildcat Mountain. WHEW! That was a climb! Carter Notch is at an elevation of 3,290ft and Wildcat is at 4,422ft. The trail ascends that in less than a mile!!! Be forewarned, it is a veritable staircase! And I'm no strangers to massive ascents! The view at the top was well worth the climb though! You can see most of the western Whites and all the way into Maine.
Well I descended about at slowly as I climbed back to Carter Notch. The trail climbs from Carter Notch to Carter dome about as steeply- from 3,290ft to Carter Dome at 4,832ft in 1.2 miles. The map even said "this section is rough, even by White Mountain standards!" While Wildcat had a beutiful panorama, Carter Dome was just a wooded summit with a cairn marking the summit. On the way to Zeta pass from the Dome, I hit Mt Hight at 4,675ft. Although not a true 4,000 footer, the view was much better than Carter Dome. I descended to Zeta Pass at around 3,900ft.

Here's where I went for broke and did South and Middle Carter. On the map its only another 5 miles of hiking. Of course, 5 miles in the White Mountains might as well be 10 miles anywhere else! The slog up to South Carter from Zeta Pass was another 600ft of gain to 4,420ft. I was sucking wind at this point but hell, why not hit Middle right? After another couple hundred feet of loss and gain, I reached the summit of Middle Carter at 4,600ft. 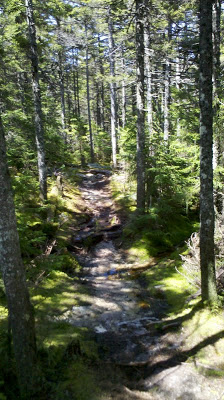 The descent wasn't too difficult and I even met a Appalachian Trail Hiker! She was hiking from the Deleware Water Gap to Mt Katahdin in Maine. That's probably the most difficult section hike of the trail and she said New Hampshire was really the major test. I hope to someday do the same!

So the overall stats for the trip were:
I would totally recommend this for a great day hike if you're into the more strenuous trails and bagging 4,000 Footers. If you're a novice hiker or someone who just wants a nice walk in the woods, I would recommend the Flume Trails at Franconia Notch State Park or some of the shorter walks in Crawford Notch State Park.

I've written some other guides and trip reports in the White Mountains. Here they are!