On my second day of this gigantic road trip, I continued east on the Loneliest Road in America. After arriving at Ely, Nevada, I turned might sights towards North Schell Peak, a massive summit in eastern Nevada.  North Schell Peak Overview Arc Dome was a challenging but excellent start to this 17 day road trip....

On my second day of this gigantic road trip, I continued east on the Loneliest Road in America. After arriving at Ely, Nevada, I turned might sights towards North Schell Peak, a massive summit in eastern Nevada.

Arc Dome was a challenging but excellent start to this 17 day road trip. Its been so long since I spend significant time in Nevada and it felt rejuvenating to be back. As I drove east, I came across endless mountain ranges and valleys all beckoning for exploration. A thought crossed my mind of simply staying in the vicinity and continuing to climb lonely peaks. But I settled on driving about 200 miles East to Ely, Nevada which is close to some of the tallest mountains in the state. North Schell Peak is 11,883ft and consequently the tallest summit in the Schell Creek Range. AT about 130-ish miles, its the largest mountain range in the State. Despite its remoteness and ruggedness, getting to the trailhead is not difficult. Its just 30 minutes from Ely Nevada and most can get to Timber Creek Campground. Those with high clearance vehicles take the road a half mile further to the trailhead. As for me, I parked at the campground and walked the half mile. Its a 6 mile round trip hike typically done in a half day from there. 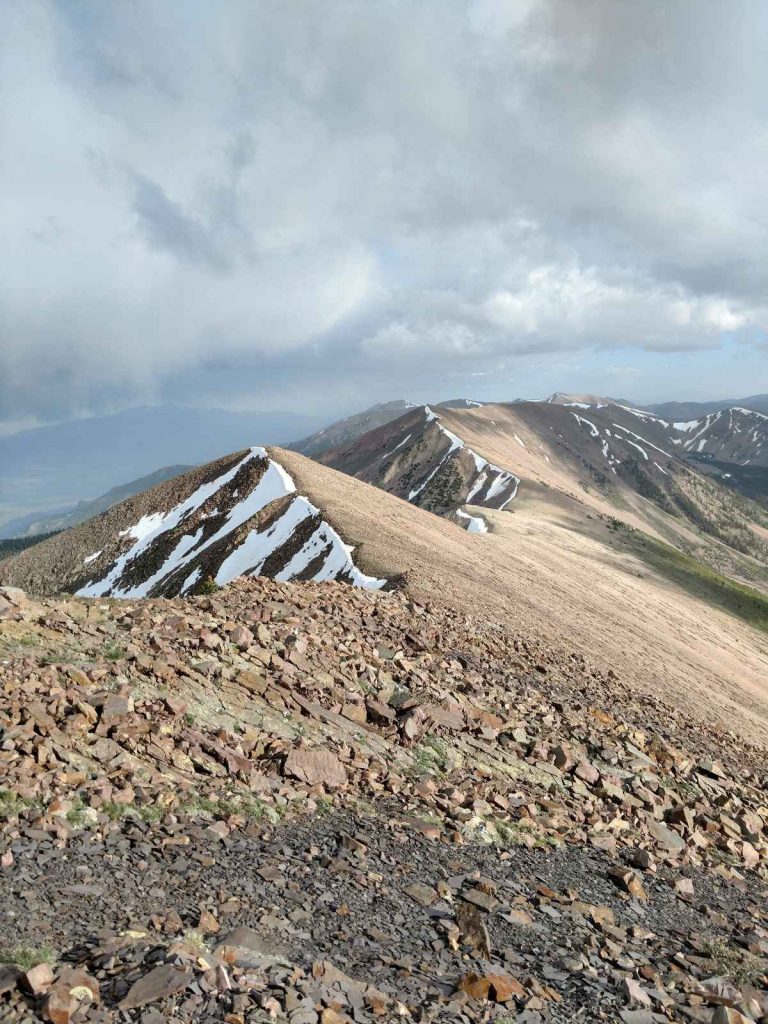 Getting to the Trailhead

By Nevada standards, this is a very easy drive. From Ely center, drive North on US-93 for 17 miles. Past the small town of McGill, turn right on State Route 486. The paved highway continues through the Gallagher Gap and reaches forest route 425 after 8.5 miles. Somewhere along the way cell phone reception completely dissipates. Forest Route 425 is dirt/gravel and rocky though passable by sedans. Its about 4 miles to the campground and another 1/2 mile to the trailhead. The road significantly deteriorates after the campground. Also, I noticed they were doing work on the campground as of June 2018 and the water was turned off.

Its not a terribly difficult ascent to the top. People describe it as class II which I think is appropriate. But for all intensive purposes, consider it a straightforward ascent. The trail is not official and there are sections of rock hopping. But at no point did I feel like I needed ropes or protection for this ascent. Here's a basic map for the area:

Its a half mile from the campground to the trailhead and I walked this easily. From the trailhead, an obvious boot path leads to the left (North). I found it a little confusing as the information sign stands above a trail headed South - this is not the direction to North Schell, Though there were no trail signs nor markers, I quickly figured out the correct trail.

The first section of the hike wanders in and out of the Aspen forests and alongside the creek which drains the main summit. Its more of a herd path than a true trail - there are no markers and nothing to say whether you're going the right direction. I generally followed the creek up to the fork and headed North from there. The creek forks with a clear view of the summit- by heading North, I found myself on the path of least resistance to the summit. Heading East (or right) would be a class III scramble to the summit- something I was avoiding that day.

Though hard to follow, I found the trail to be extremely scenic. The lower sections wander through Aspen forests which eventually give way to a glorious preserve of rare Ancient Bristlecone Pines - the longest living things on Earth. I spent considerable time wandering through their groves. Again, watch out for numerous side trails that lead to nowhere in particular. The creek served as a great path up to roughly 10,600ft . As others have written, the trail eventually ends. Its up to you whether you reach the end of the informal trail or whether you simply decide to take the most direct route to the summit. Shortly after I reached treeline, I did the same. I found that taking the route over the limited vegetation led to a relatively easy route. Trekking poles made short work of this steep section

After a brief flat section, the final summit push was about 1/2 a mile. The elevation began to hit me but this point but it was alleviated by the fantastic views. The Schell Creek Range extends for 130 miles and it felt like all of it was visible from the primary ridgeline. Plus there was a fantastic view of Wheeler Peak (Nevada's highest individual summit) rising off in the distance. I acheived the summit of North Schell Peak within about 3 hours of starting. As with so much of Nevada's summits, an endless view of mountains and valleys was visible. The stark emptiness of Nevada continues to amaze me. I feel like it looks similar to the way it did hundreds of years ago- empty and magnificent. The summit register testified to the remoteness of the place as there were less than 100 names signed since 2016. I was intensely grateful to be in such a wild place. 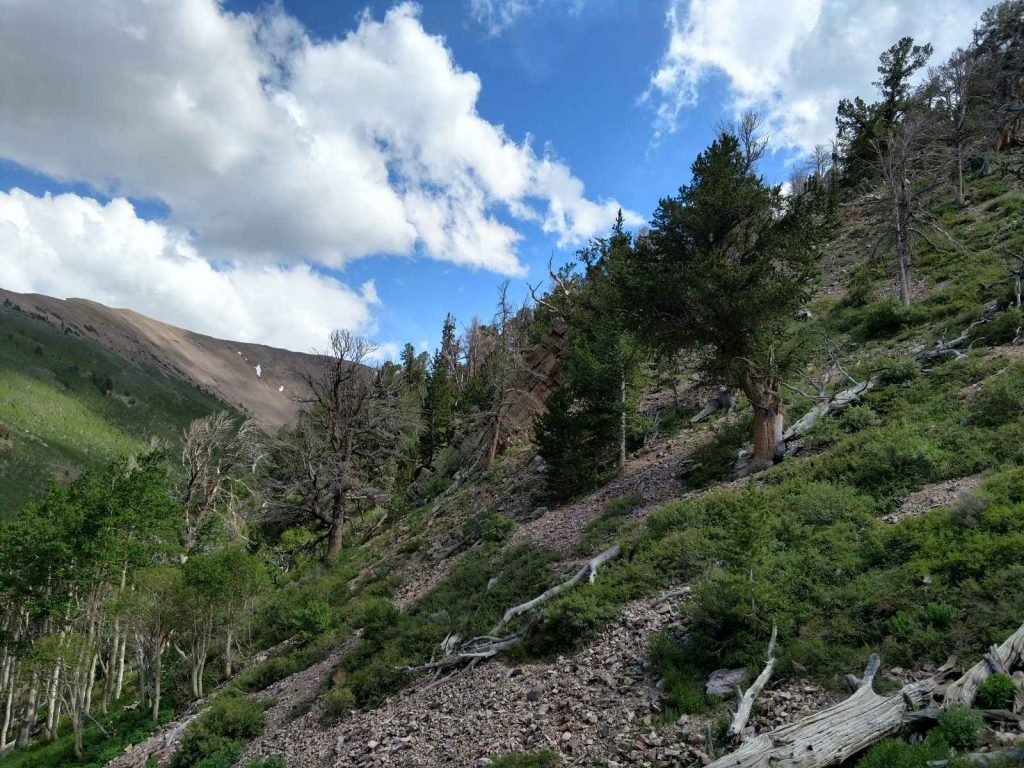 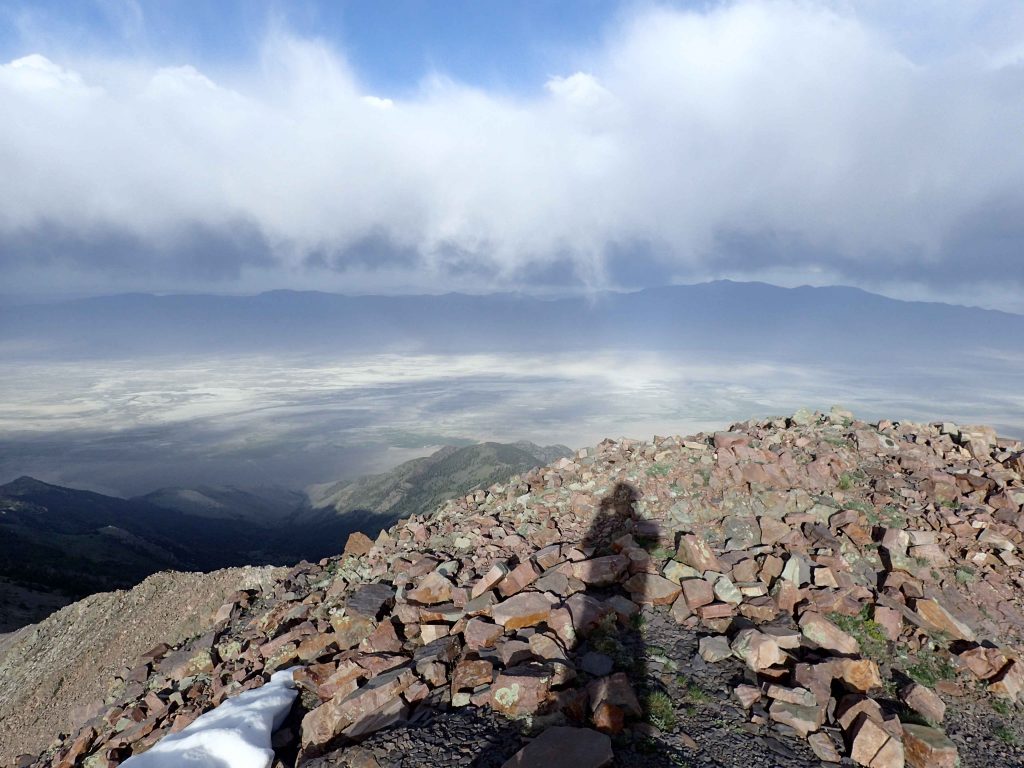 I descended the same way I came. The openness of the alpine zone and the lightly forested lower sections made it easy to find my way. At the bottom, I decided to camp at the site about 1/2 a mile below the trailhead. This was also isolated; there was no cell phone reception nor internet available which made the site enticing. Though primitive, the campsite was close to water, making it a delightful spot. I stayed the night before turning my sights North towards Idaho, a state I hadn't been to in over 7 years.
NevadaNevada AdventuresScramblesUltra Prominent Summits