When it comes to the far flung and remote, few places match Central Nevada. It was a particularly difficult section to cross for those on the California Trail as well as the Pony Express. Except for a few asphalt and dirt highways, not much has changed since then. It’s a mythical frontier that draws solitude...

When it comes to the far flung and remote, few places match Central Nevada. It was a particularly difficult section to cross for those on the California Trail as well as the Pony Express. Except for a few asphalt and dirt highways, not much has changed since then. It’s a mythical frontier that draws solitude seekers like me.

My first foray into this part of the country was when I took a road trip on Highway 50, known as “The Loneliest Highway in America”. It received is moniker from a Life article of all things. Back in the 1980’s road trippers were advised to avoid it due to lack of services and gas stations. This name intrigued me when I was 22 as it does now. As I drove across a sparsely populated land, it was a constant rollercoaster of mountain passes and deep valleys. The Great Basin has dozens of mountain ranges. I dreamed of returning to climb all those mountains someday. Almost a decade later, I’m working full time in the Bay Area but managed to get 2 weeks off. Guess what was number one on my list of things to do? 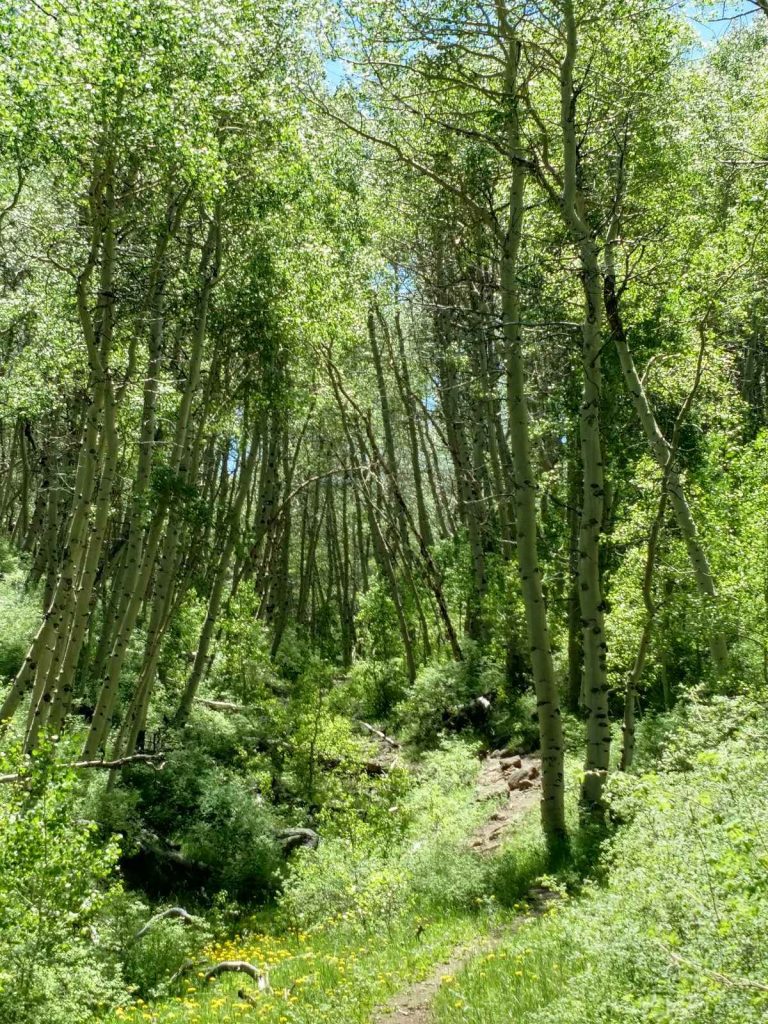 Getting to the Trailhead

Humboldt-Toiyabe National Forest is by far the largest national forest outside of Alaska. Encompassing dozens of mountains, their remoteness is practically lunar. Arc Dome is one of the chief summits in this high desert wilderness. A high clearance vehicle and high tolerance for backroad driving is a prerequisite for just getting to the trailhead- something that prevented me in the past. But dammit I bought my high-clearance all-wheel drive Outback for stuff like this so taley-ho! Approaches vary but since most are probably coming from the West (Reno), the best way to get there is through driving to Gabbs. From here, I recommend touring Berlin-Ichythasaurs state park where there’s a fascinating chance to see a paleontology sight where 9 Ichythiasaurs lie fossilized. Also nearby is Ione, the original county seat of massive Nye County. Now it’s a curious ghost town. I drove up and over the Shoshone Mountains and down to the Yorba Indian Reservation. From here, its 8 miles and two stream crossings to the trailhead at Columbine Campground. 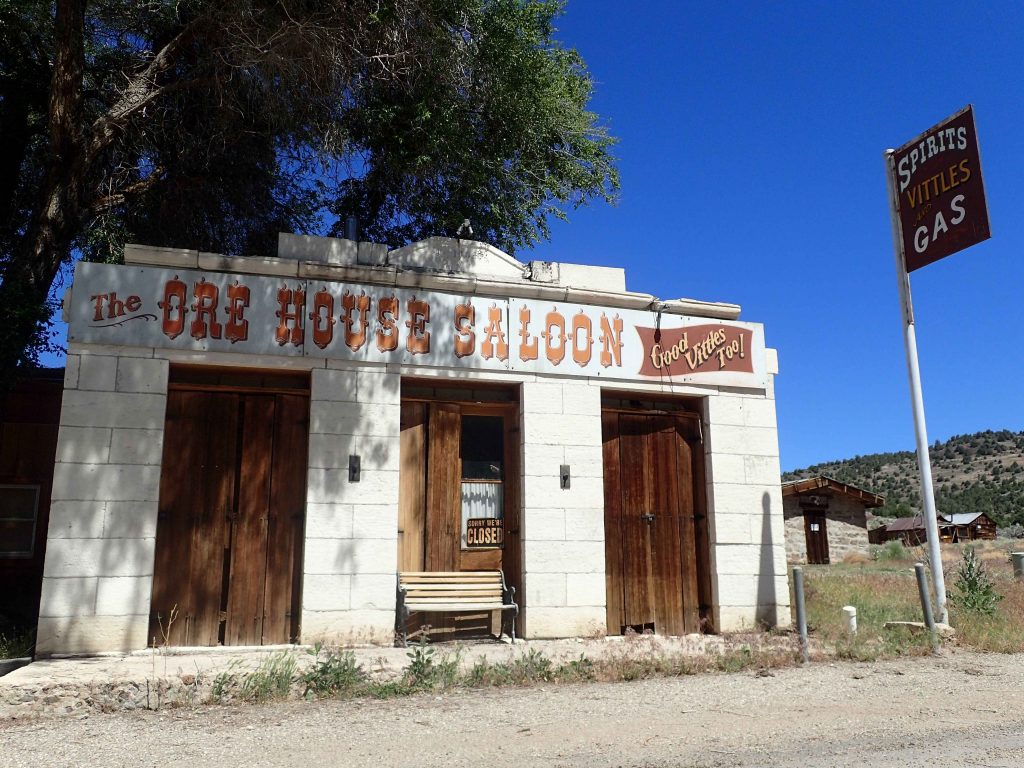 Anyone reading with a “serious” 4x4 will laugh at the “difficulty” of getting to the trailhead but I was proud of myself. Such things deterred me when I had a sedan but now it feels like a whole new part of the map is available to me!

The trail starts at Columbine Campground. This primitive campsite has about 4 sites, some parking and a pit toilet. A nearby stream provides water that must be treated given the proximity to cattle ranges. The trailhead is at the edge of the loop. I was brimming with excitement when I crossed the familiar pentagonal sign marking “Arc Dome Wilderness”. A look around would make the sign seem superfluous. I left the last sign of civilization about 50 miles back. 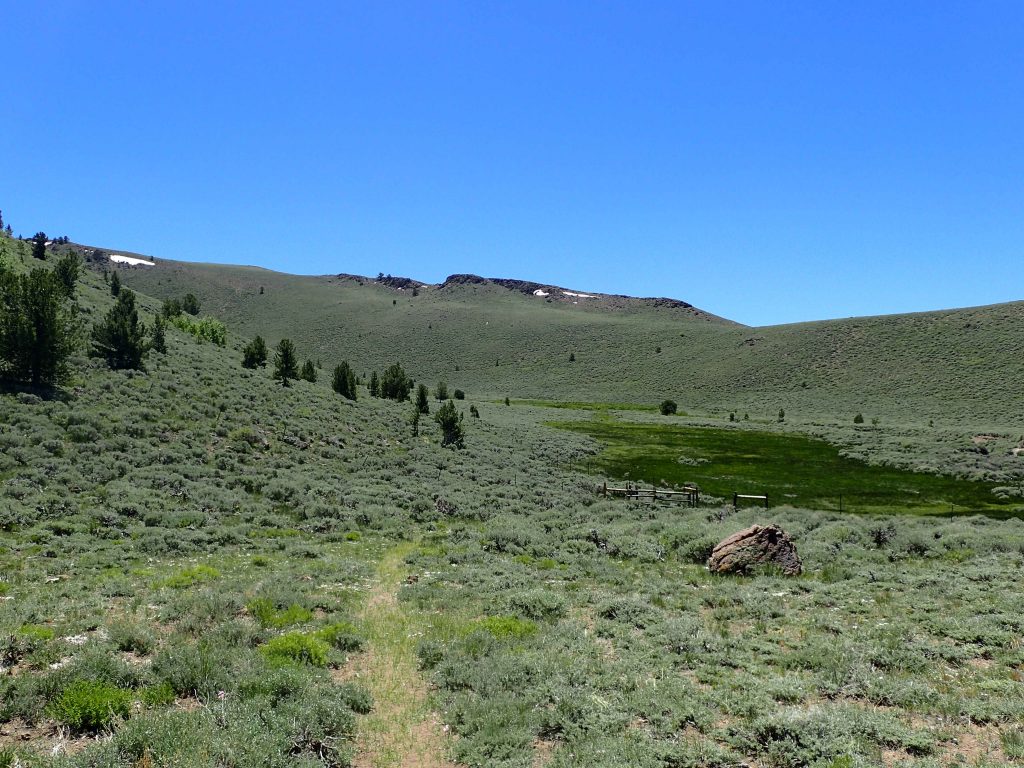 The trail follows through a lush forest of aspens for bout ¼ of a mile before coming to an unmarked junction. There’s two options, both are about the same length. The trail to the right continues through the aspen forest and up to several alpine plateaus with phenominal views. The trail to the left hugs Steven Creek up to its headwaters before dipping down to the creek and back up again. The trails intersect at the ridgeline. I’m glad I took the trail to the right first which was fantastic. The views are far more superior which made the ascent feel less exerting. I felt like the ascent was considerably gentler than others of a similar altitude. Eventually I arrived at the ridgeline which was remarkably level. I read how other hikers had turned this 16 mile hike into a backpacking trip; not because of the distance but because the opportunity to spend a night on the Toiyabe Crest with hundred mile views and extremely clear starry nights. I caught my first glimpse of Arc Dome which rose like a sharp pinnacle in the distance. I don’t know why somebody named it “dome”. It looked imposing from a distance. The trail continued to wind towards the sub-peak of North Arc Dome before dipping a full 700 feet to the saddle. Talk about a false summit! But I had views of the entire mountain range and about 7 others so the descent didn’t deter me too much.

The gap between North Arc Dome and Arc Dome lies at 10,700 ft, about 1,000ft below the summit. I dropped my pack here as its just half a mile to the top. The trail is in excellent condition and I had no trouble following the switchbacks to the summit. At the summit of Arc Dome, I felt like the last human on Earth. There was simply no sign of anything human except for me. It was sunny, a bit breezy and about 50 degrees- about as tranquil as it gets for 11,700ft. I relished my brief moments at such a profoundly isolated place. The summit register testified to this as there were less than 10 names signed in 2018. In fact, since 2016, there were about 50 names. Clearly only a few of us care to climb such a desolate summit. 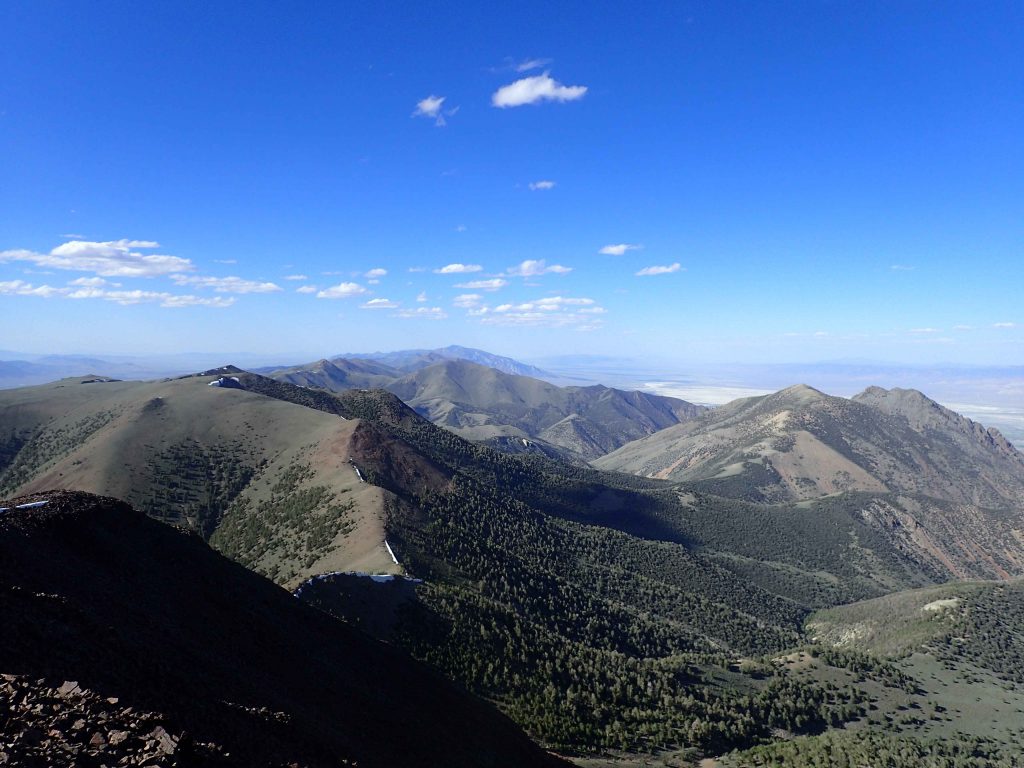 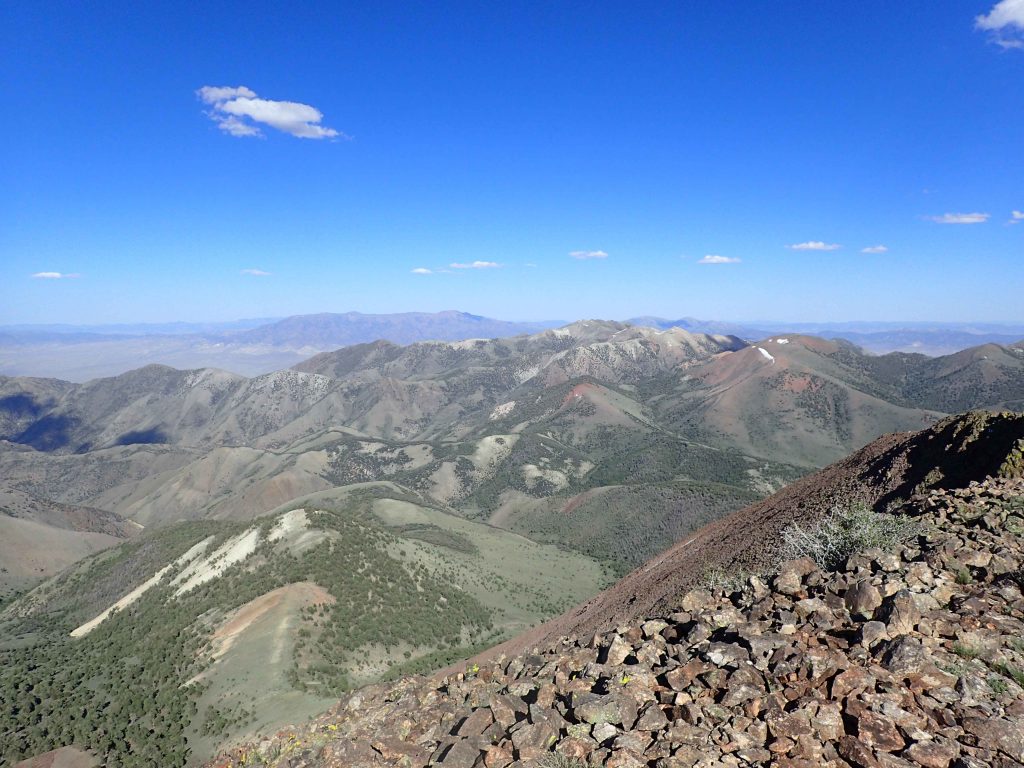 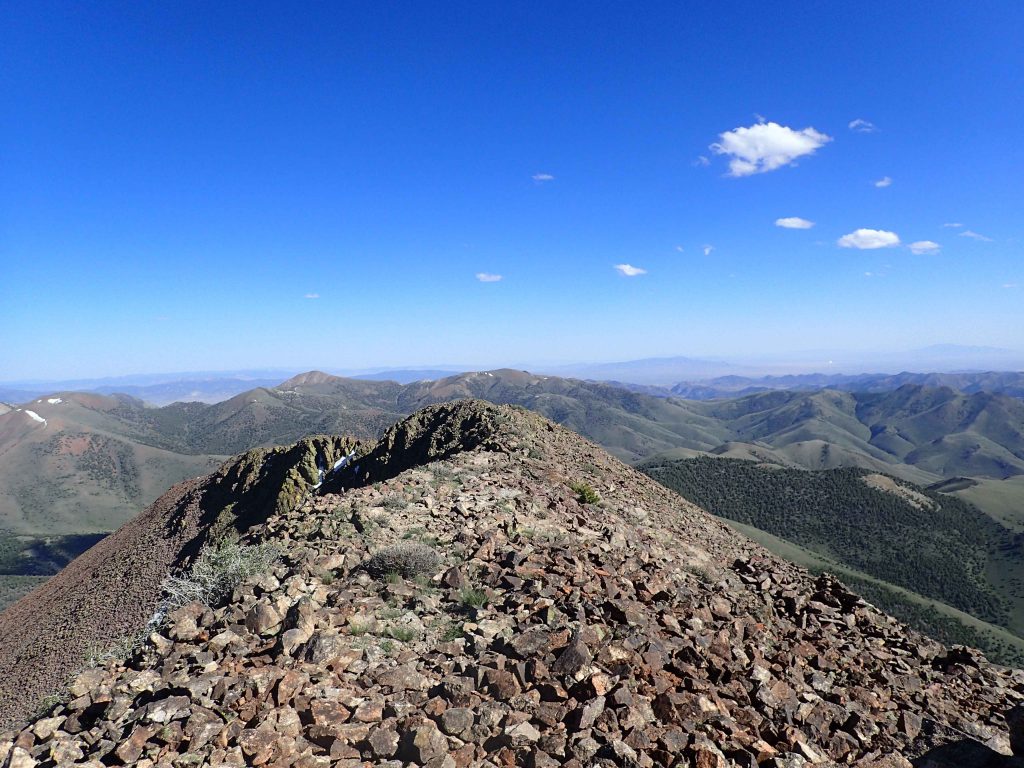 I spent considerable time on the summit enjoying the vastness of central Nevada. It looked uninhabited and beautifully desolate. In that moment I wished I hiked the full Toiyabe Crest Trail which runs the ridgeline of this mountain range. When I finally descended from the top, I took the second route (Stevens Creek) trail back. There were some spots of deep snow but I crossed them easily. I wished I better anticipated the steep descent and climb out of the Stevens Creek gully. Oh well, I caught a gorgeous sunset from the saddle! 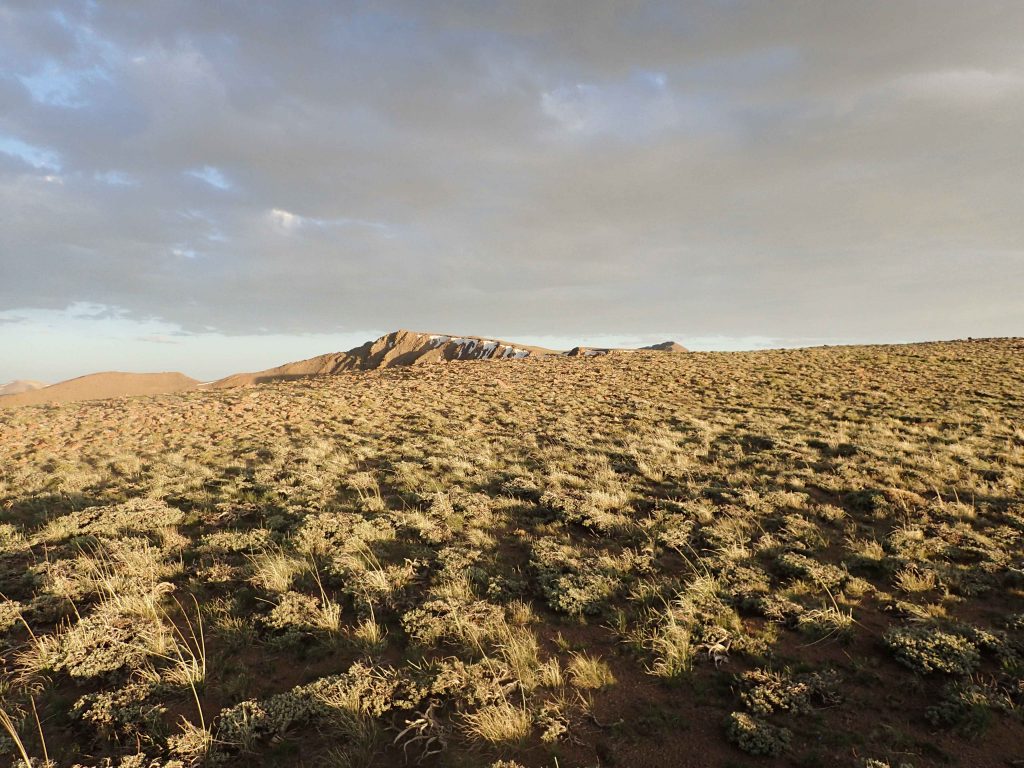 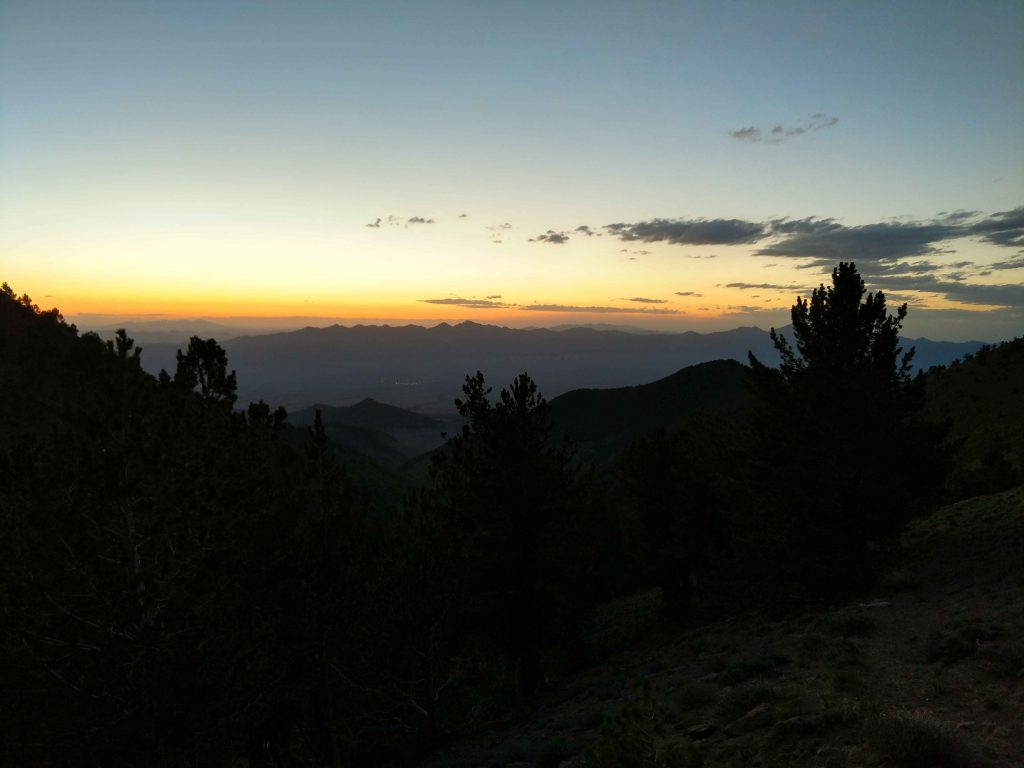 It took about 9 hours for me to drive to the trailhead and about 10 to hike Arc Dome. It's totally worth the effort to get here. Only a few places south of the Arctic Circle match the solitude of this place and I already want to come back. But I had a few more days to spend in Nevada so I hopped back on the Loneliest Road and headed East.
HikingNevada