My final adventure of my 17 day road trip through the Northwest was hiking Lamoille Canyon in the Ruby Mountains of Nevada. Though extremely picturesque, the canyon remains unspoiled due to its remoteness. After climbing Utah’s State highpoint, I officially turned my sights towards home. Its a long drive from Salt Lake City to San...

My final adventure of my 17 day road trip through the Northwest was hiking Lamoille Canyon in the Ruby Mountains of Nevada. Though extremely picturesque, the canyon remains unspoiled due to its remoteness.

After climbing Utah's State highpoint, I officially turned my sights towards home. Its a long drive from Salt Lake City to San Francisco and there are hundreds of places I wanted to see. But I looked forward to seeing one special destination that's alluded me over the years: Lamoille Canyon. Many regard Lamoille Canyon to be on par with Yosemite or the Grand Canyon as a destination. Thankfully, its so far from any major city or airport that it remains off the radar to most.

Getting to Lamoille Canyon

The closest major locality of any consequence is Elko, Nevada which is on Interstate 80. Interestingly, Elko and the nearby Spring Creek are rapidly growing communities in spite of being hundreds of miles from major metro areas. One look at the Ruby Mountains probably explains that. I'm sure the cost of living is low too! I plugged Forest Route 660 or "Lamoille Canyon Scenic Drive" for the easiest directions. Paved roads and easy directions make this an easy find from Interstate 80. Its roughly 12 miles from the turnoff to the end of the road but it took me an hour to drive it. I noticed on the way up that every campsite was taken- don't expect to stumble across one! 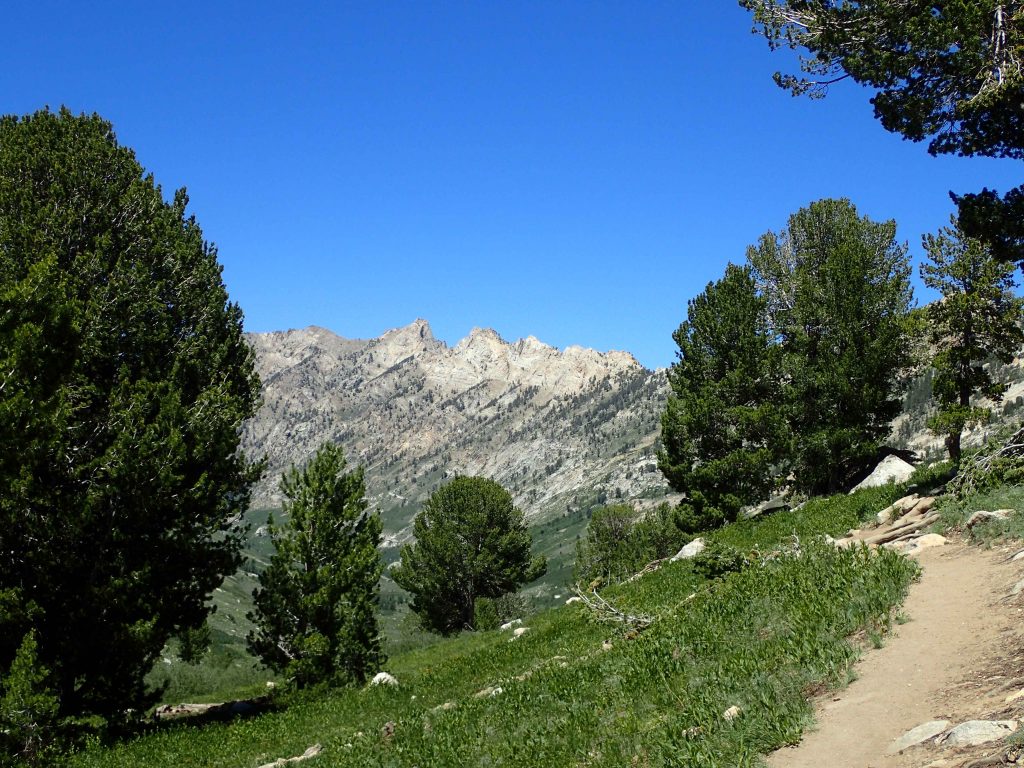 At the very end of the road there's a huge parking lot for hikers. I started my trekking here on the Dollar Lakes Trail. An interpretive sign at the beginning told me distances so I basically prepared for a hike ranging  from 5 to 10 miles. A few groups of backpackers looked to get deep into the Ruby Wilderness with this being their starting point. Hitting the trail, views of the lower Lamoille Canyon instantly enveloped me. Trees are scant at these elevations which makes for a hike of uninterrupted panoramas. The crowds thinned too as I climbed higher. On this late June day, the temperatures were 77 degrees without a cloud in the sky. Hiker's paradise. 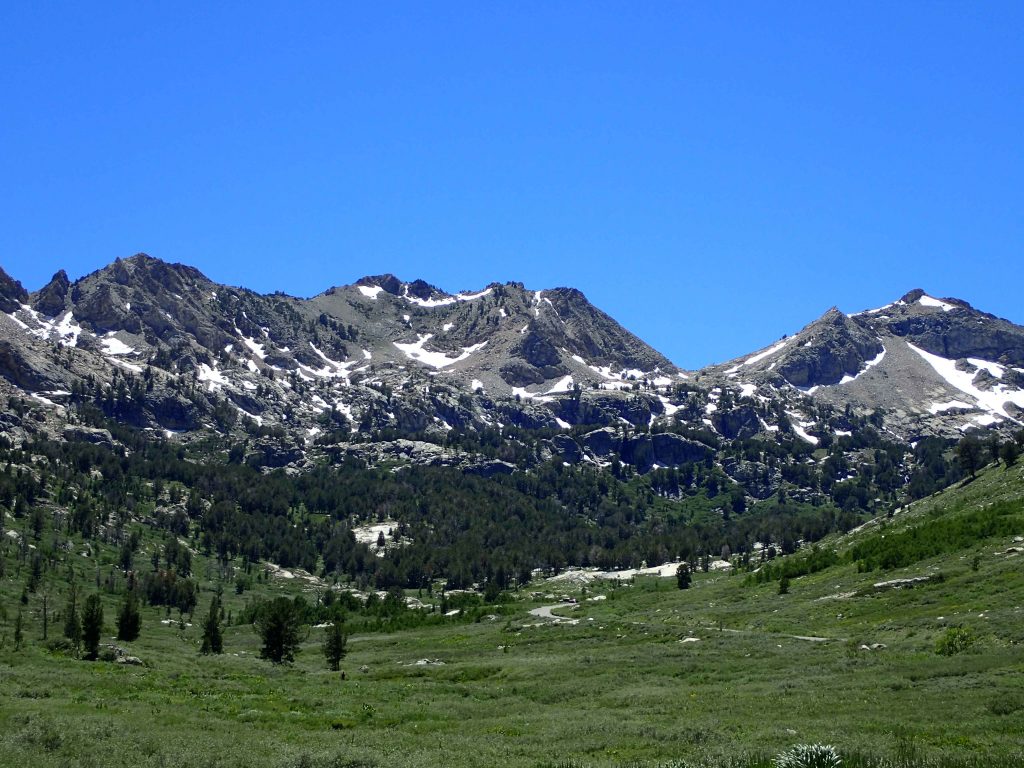 After two weeks on the road of seeing the most magnificent mountain landscapes of the Northwest, desensitization worried me. However I was as giddy for this hike as the day I hit the road. Surely this was the icing on the cake of an extraordinary adventure.

After 1.4 miles of steady climbing, I arrived at the first of several alpine lakes. The two lower lakes on this hike are the Dollar Lakes, both about the same size. With a backdrop of rocky spires and persisting snow, it was a tranquil site. I stopped for a brief snake at the second lake. Another 0.5 mile of hiking lead me to the outlet of Lamoille Lake: the most beautiful of the three. I noticed most hikers made this their halfway point. 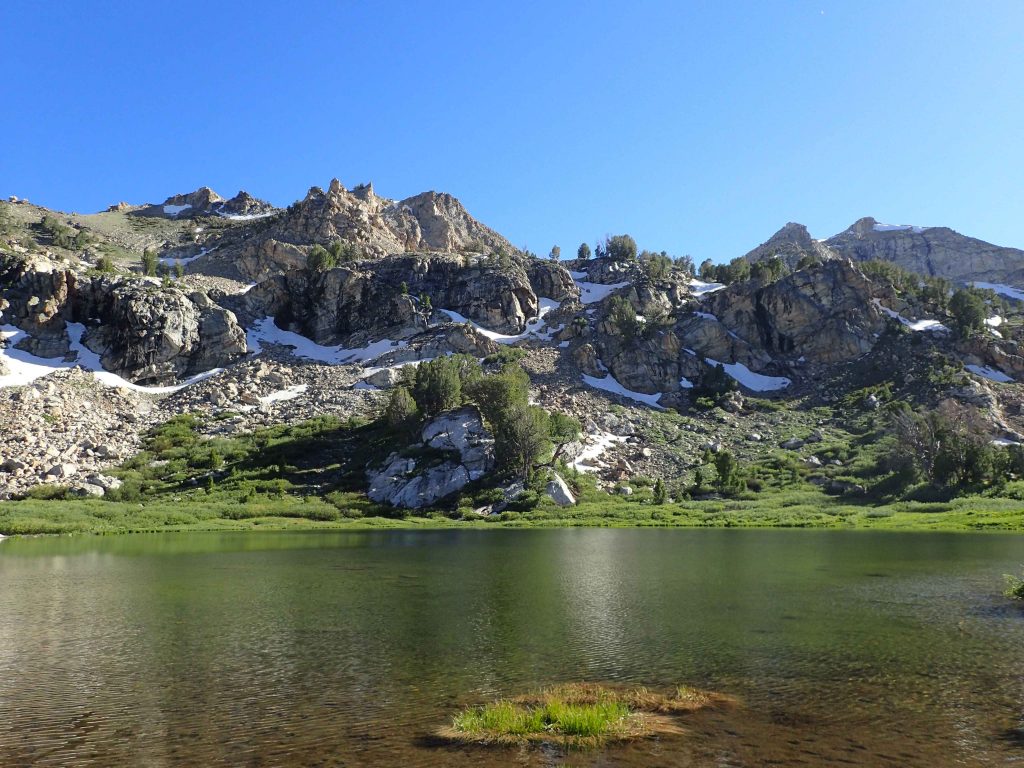 The trail presses past Lamoille Lake without any opportunities to linger on the shore. At this point is was barely mid-afternoon and I had plenty of daylight left so I carried on. Though not a particularly steep trail in the grand scheme of things, I started to feel the elevation as I rose past Lamoille Lake. Thankfully the views continually improved and I pushed to an altitude almost devoid of obstructions.

Boy was I happy I kept going! I encountered only handful of hikers at this point and Liberty Pass was phenomenal. A classic pentagonal sign marking the wilderness boundary rewarded the effort of getting to this point. Shortly past the pass was a heavenly scene of Liberty Lake framed by dozens of nameless summits in the Ruby Mountain backcountry. This was just 4.0 miles from the trailhead but it felt like a world away. 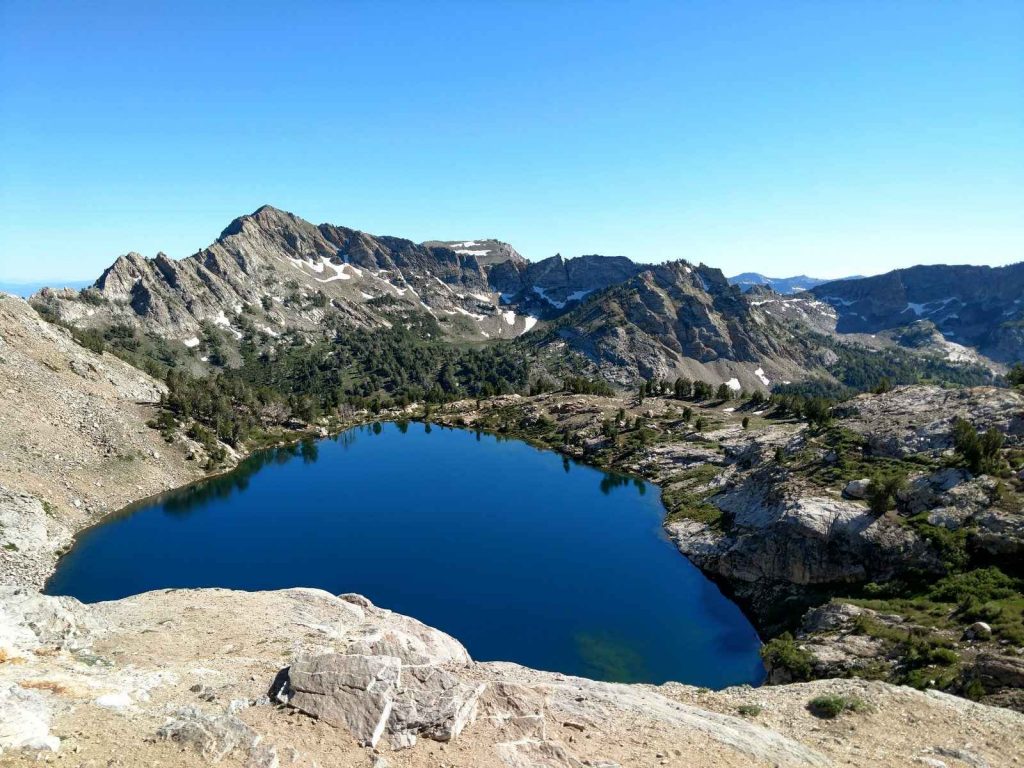 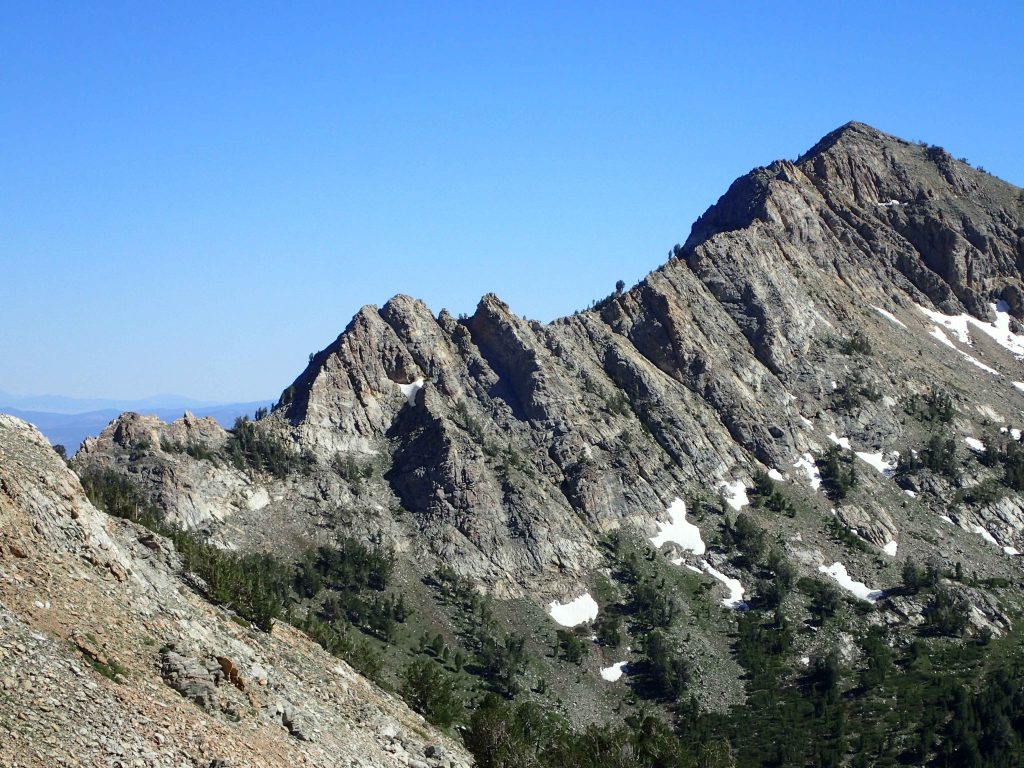 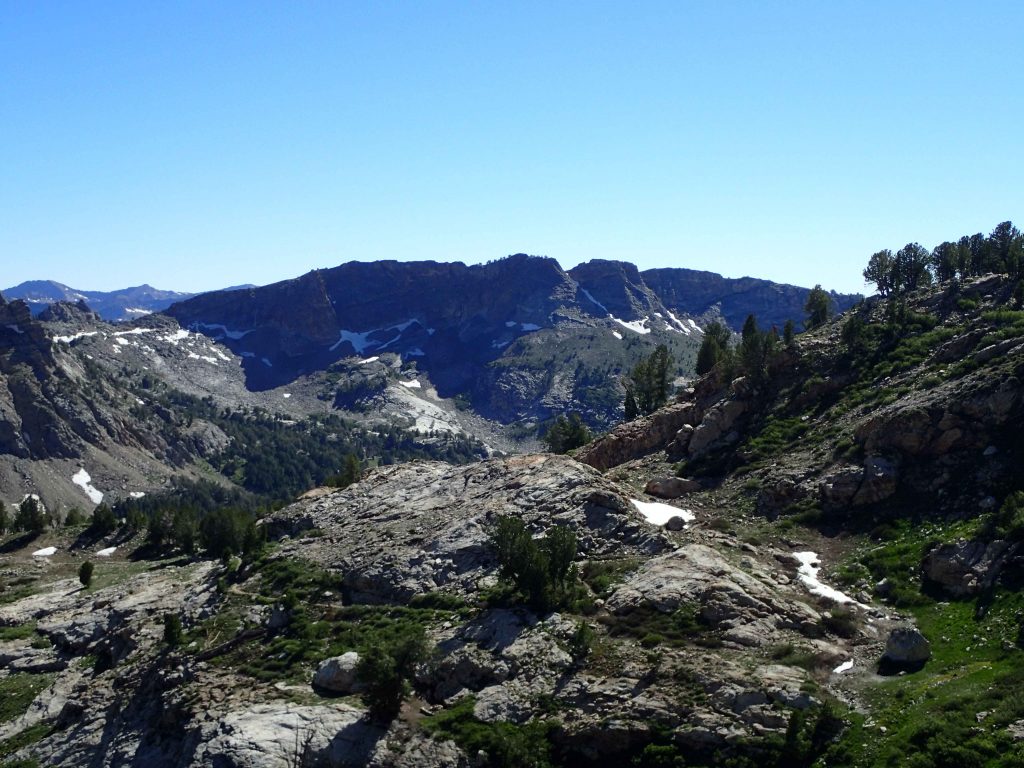 Overcome with gratitude for this respite and the trip as a whole, I lingered for an hour at the Liberty Lake overlook. Two weeks on the road left me a bit hagard and slightly uncivilized but I saw parts of the country most only see in books or guides. This was my last day and last major hike before returning to life in the Bay Area. I certainly looked forward to real meals, warm showers and returning to work. Nevertheless, this last hike sealed this trip as unforgettable. 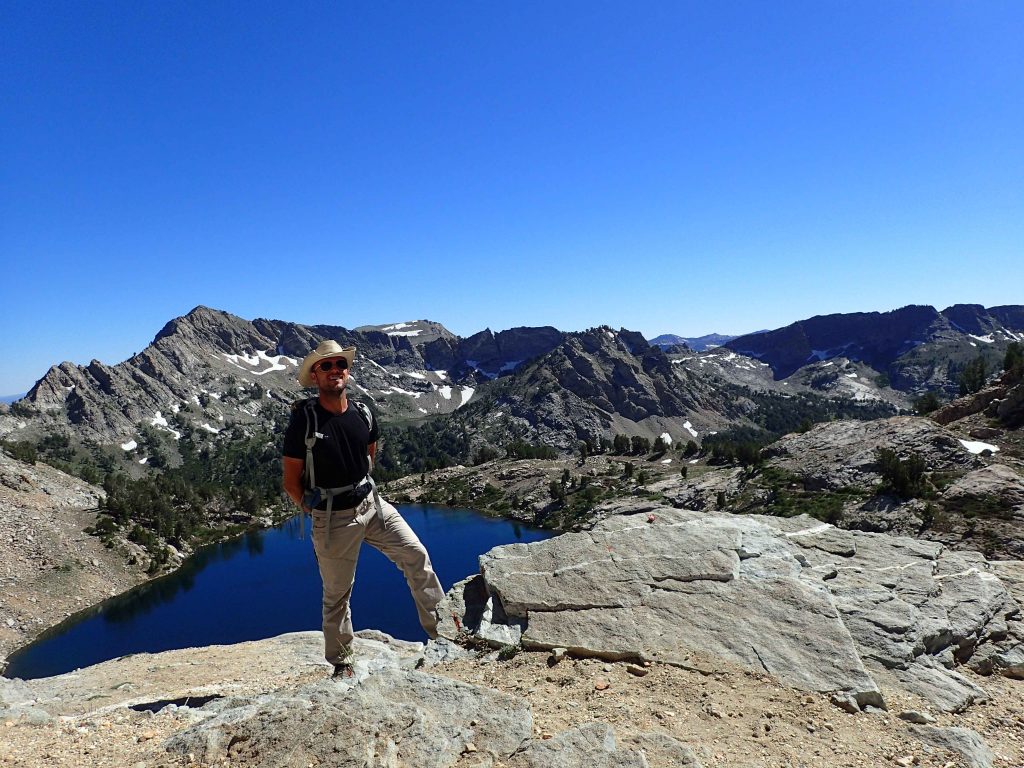