Kings Peak is the highest mountain of Utah and the 7th tallest state high-point of all 50. Its considered difficult due to its remoteness, altitude and need for backpacking but a fantastic foray into the High Unita Wilderness. King Peak; King of the Unitas After spending a few days poking around Yellowstone and the Tetons,...

Kings Peak is the highest mountain of Utah and the 7th tallest state high-point of all 50. Its considered difficult due to its remoteness, altitude and need for backpacking but a fantastic foray into the High Unita Wilderness.

King Peak; King of the Unitas

After spending a few days poking around Yellowstone and the Tetons, I drove clear across central Wyoming and down into the Unitas of Northeaster Utah. This massive mountain range is unusually oriented East-West. This ridge of alpine summits culminates to Kings Peak  at 13,534'. Of course I had to hike it on this trip to bag my 41st state highpoint! Getting to Kings Peak is not difficult but involves navigation of several forest-service back-roads. Starting in Mountain View, Wyoming, I drove south along surprisingly good dirt roads. Essentially any car can make it to the trailhead for Henry's Fork, the most popular approach. The trailhead has plenty of parking but I wasn't shocked to see it packed with people and animals. Though a hard hike/backpacking trip, Kings Peak is increasingly popular to the residents of Salt Lake City. From the trailhead at Henrys Fork, its approximately 13.5 miles one way to the summit, making for a 27 mile round trip. Like most, I chose to backpack this in a two day trip 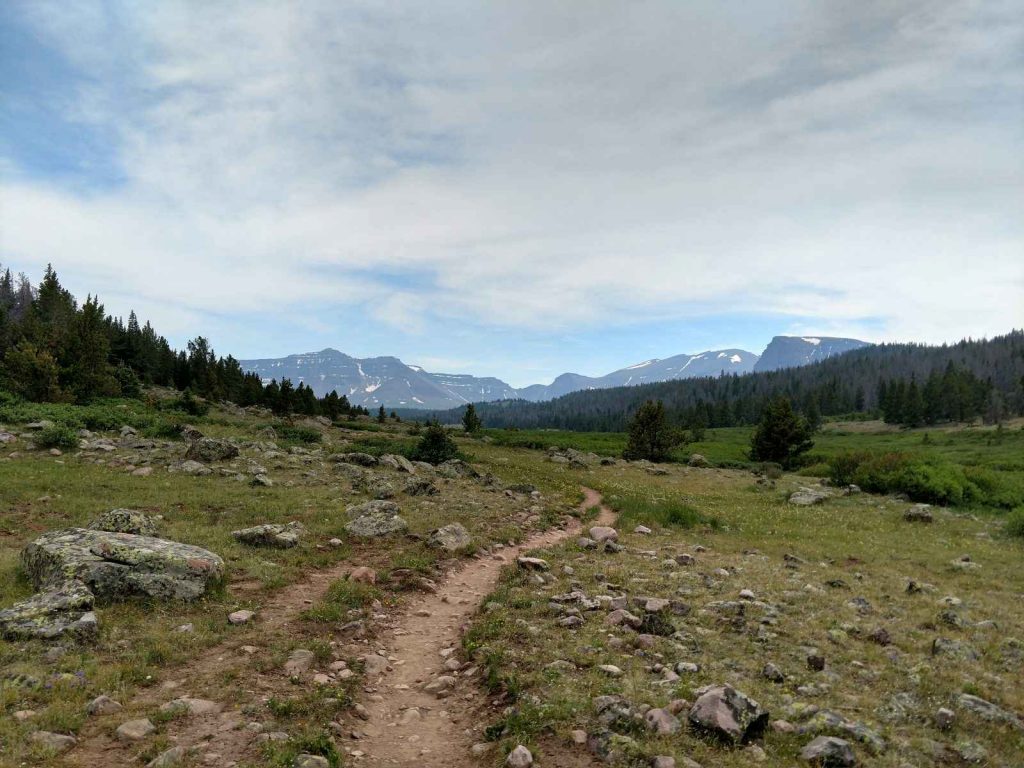 The first 5.3 miles ascend roughly 1,000 feet and a somewhat monotonous. There's a few glipses of Henry's Fork through the trees but mostly its just a walk in the woods. On my trip I ran across a porcupine which was exciting- she didn't seem too perturbed by all the hikers but climbed a tree to avoid us. Thankfully no dogs went to investigate. At 5.3 miles I came to the trail junction with the main trail heading to the Left or South. This was a nice spot for lunch with the High Unitas rising imposingly in the distance. Just a hundred yards from the junction the trail crosses Henrys Fork on a rickety bridge before emerging further from treeline. 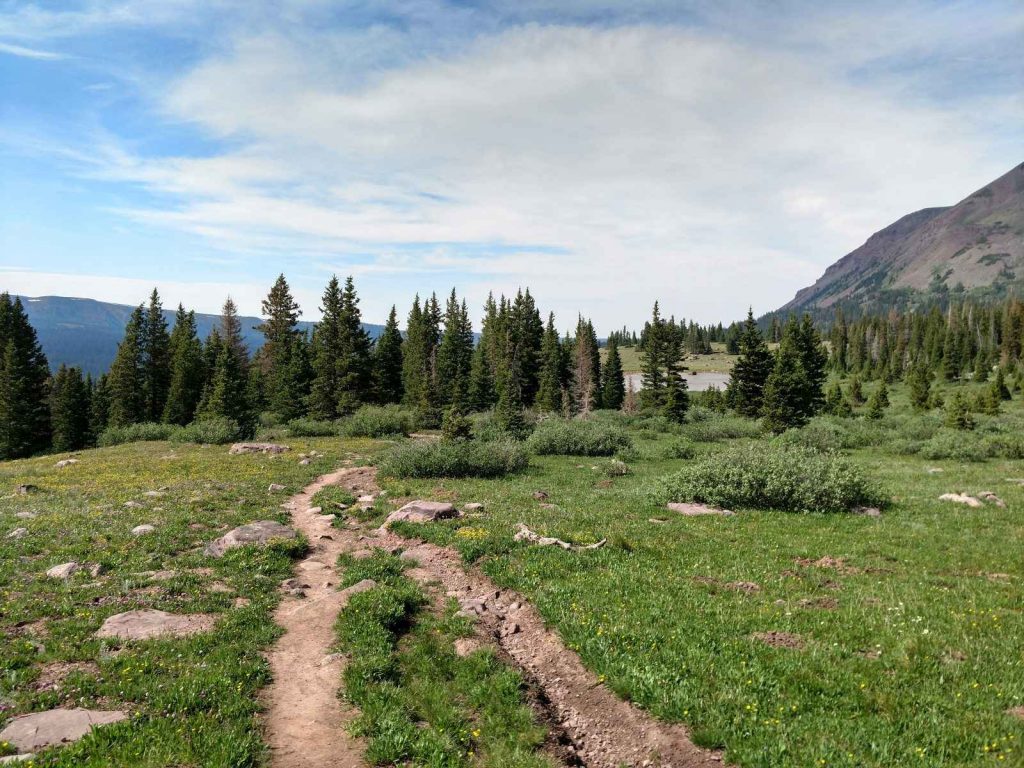 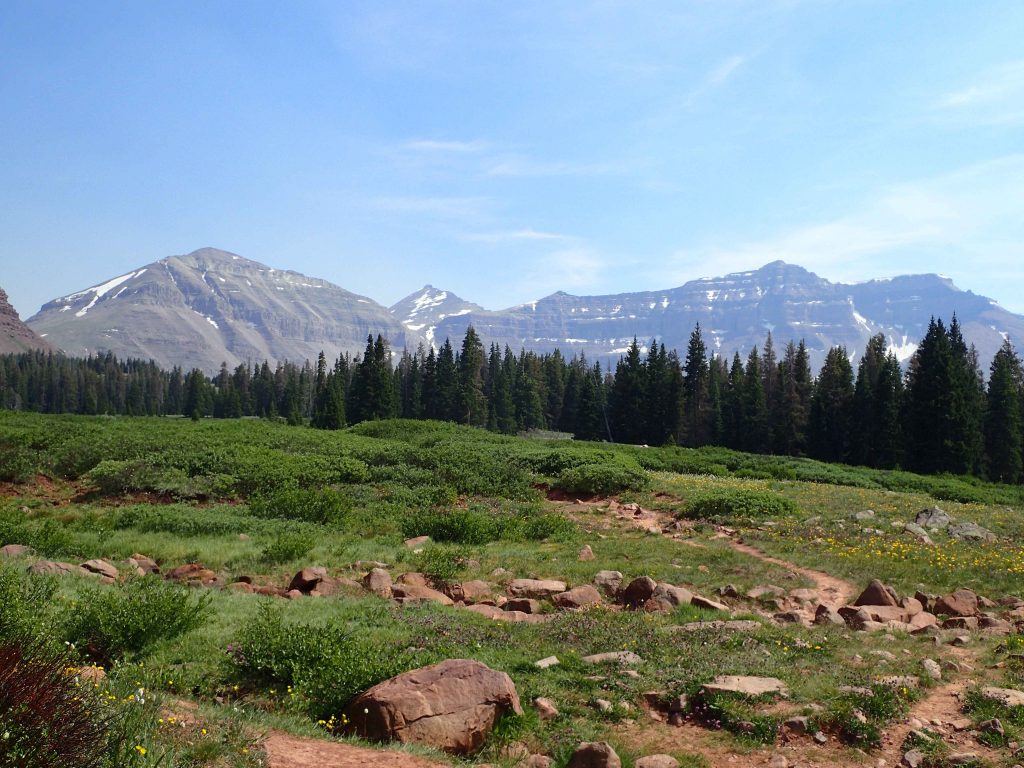 Its two miles from the trail junction to Dollar Lake with another 500 ft of elevation gain. Everyone thought the same thing that weekend- hike up to Dollar Lake and camp there overnight before bagging Kings Peak the next day. I saw numerous good campsites around Dollar Lake but decided to hike further. There was too much commotion and it was barely midday.

I found this section extremely gorgeous. Past the treeline, I was encircled by the sharp ridge-line of the High Unitas with Kings Peak emerging in the distance. I left the mosquitoes behind at Dollar Lake so took my time in this section. The Unitas were so different from everything else I've seen in Utah. The trail is surprisingly gentle at these elevations As I crossed above 10,000ft, the vegetation became sparser and the landscape began looking lunar. Patches of snow were common though I didn't need any traction to cross them. Just about 500 feet below Gunsight Pass I found a campground close enough to a small lake. Though it was only 4:00PM, I set up camp and thought I'd settle in. 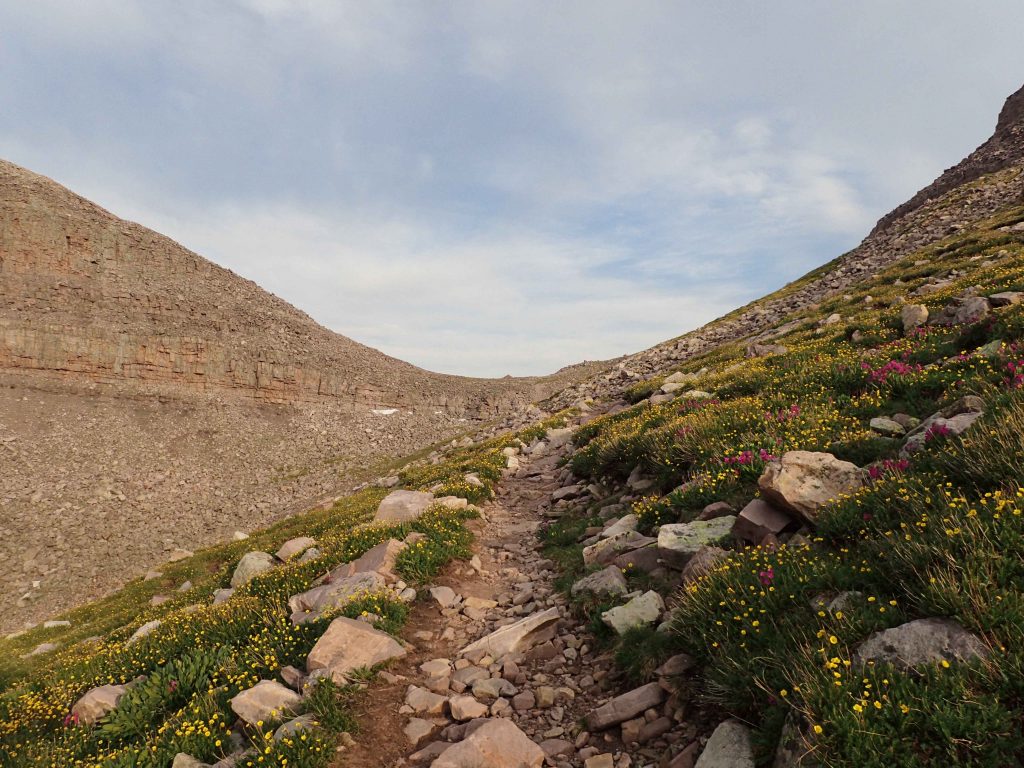 Gunsight Pass through Painters Basin and to Anderson Pass

I still had an abundance of daylight and basically nothing to do at my little campsite. So, I decided to simply go for the peak in the late afternoon. It wasn't a terrible decision but I summitted after dark so I didn't get the best of views. The final 500 ft to Gunsight Pass were straightforward with some switchbacks. Gunsight Pass is a narrow notch between some of the tallest summits in the Unitas. At 11,900 ft, I was still short of the summit by about 1,600 ft. The real rub is that the trail descends 500ft before resuming its assault of Kings Peak. Thankfully this descent is through the most beautiful part of the trip: Painters Basin. At sunset, Painters Basin was alight with alpenglow and fields of brilliant wildflowers covered the valley. I was considerably slower in this descent with all the picture taking. 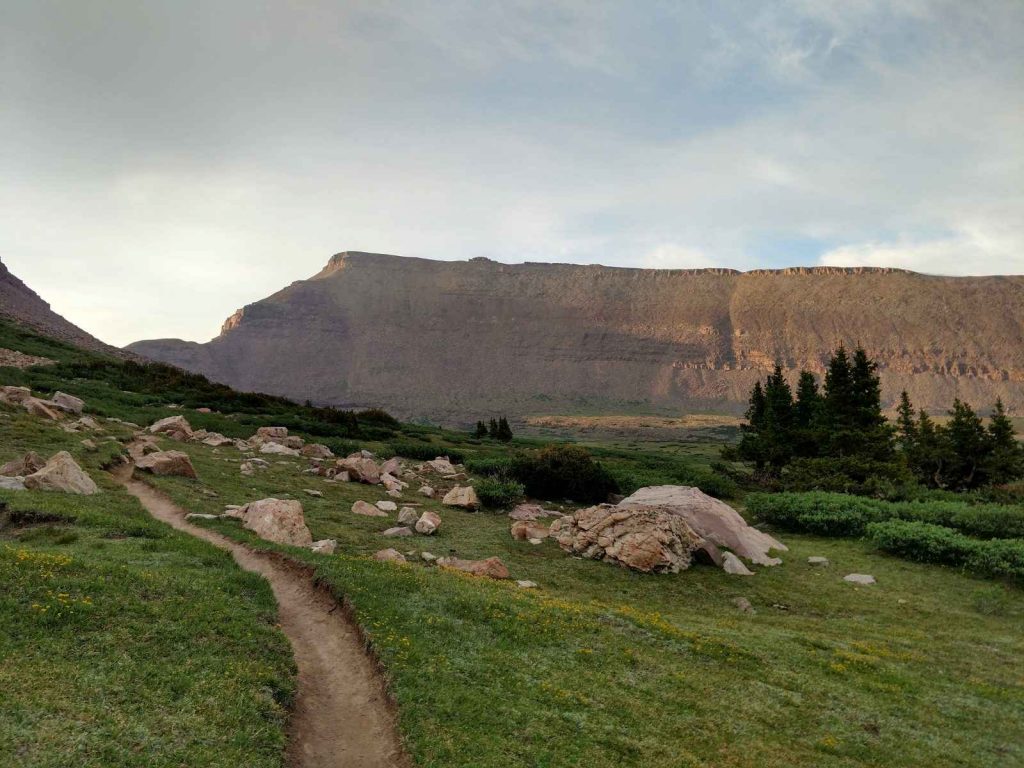 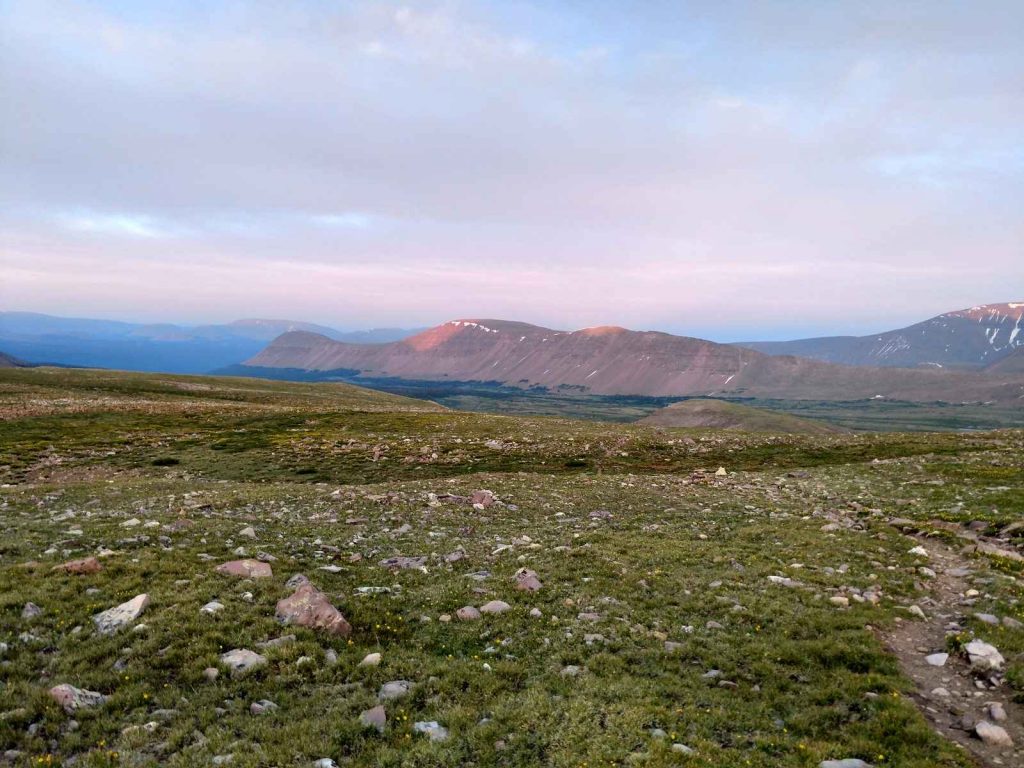 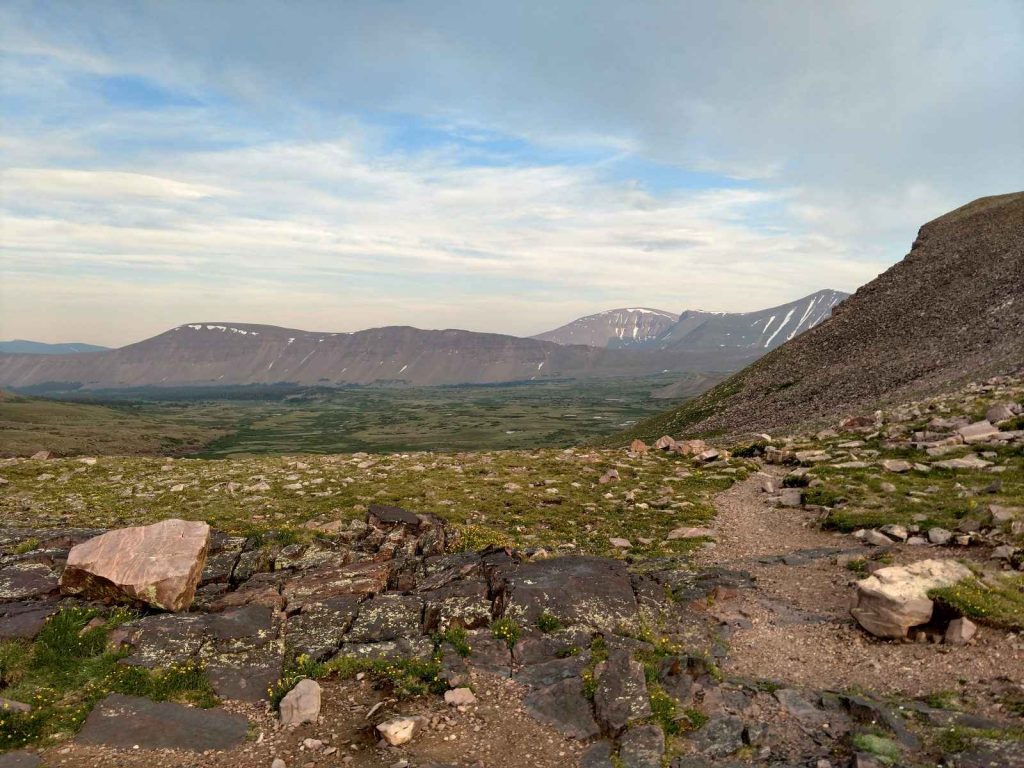 I passed the two trail junctions and kept to the right in both to keep the obvious profile of Kings Peak in my sights. Shortly after the second trail junction, the trail becomes very steep and difficult to follow in some sections. Its about 3.0 miles and 1,300 ft of ascending to Anderson Pass which separates Kings Peak from the nearby 13ers. I found the section just below Anderson Pass difficult to follow. Anderson Pass is 1,000 ft below the summit. Anderson Pass to Kings Peak This section is considered class II and it involved scrambling. For me it wasn't too difficult but it was very slow going. The elevation really hit me in this steep section which involved bolder hopping and avoiding small crevasses. Though just 0.6 miles in length, this section took me close to an hour and fifteen minutes. Of course, it was littered with false summit, making it a bit frustrating as well. But I found myself standing on the true summit at 10PM just as a full moon appeared over the clouds. There was no fanfare with me on the summit given that I was tired and wishing that I was there at dawn rather than the middle of the night. But I found the summit register and tallied my 41st state highpoint. I was alone but the summit register showed me how popular the mountain was; hundreds of names were signed in the past few years. Descent took me about as long as the ascent given that the rocks were tough on my tired joints. Painters Basin in the moonlight was about as pretty as it was during sunset but I wasn't prepared for any night photography. I trudged up Gunsight Pass again and descended to my small campsite by 2AM.

The next day I woke at 9AM to the sound of many parties making their own ascent of Kings Peak. I was a little glad I had the peak to myself the previous night but it would have been nice to see the view in the daylight. But I broke camp and began my long journey down. 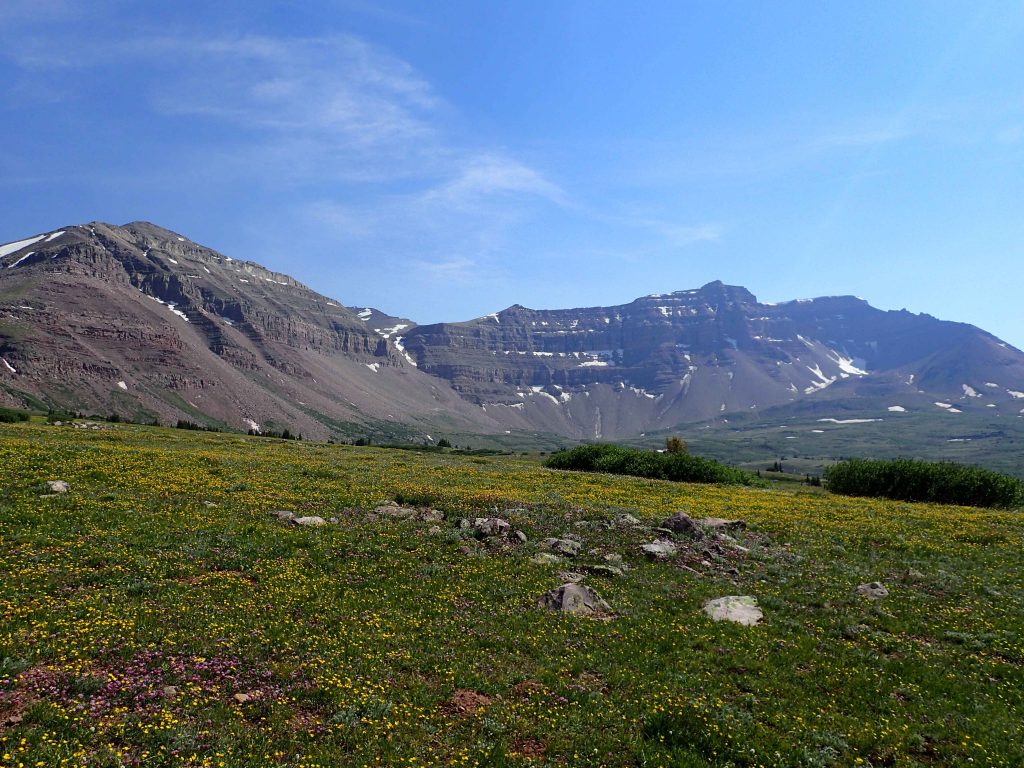 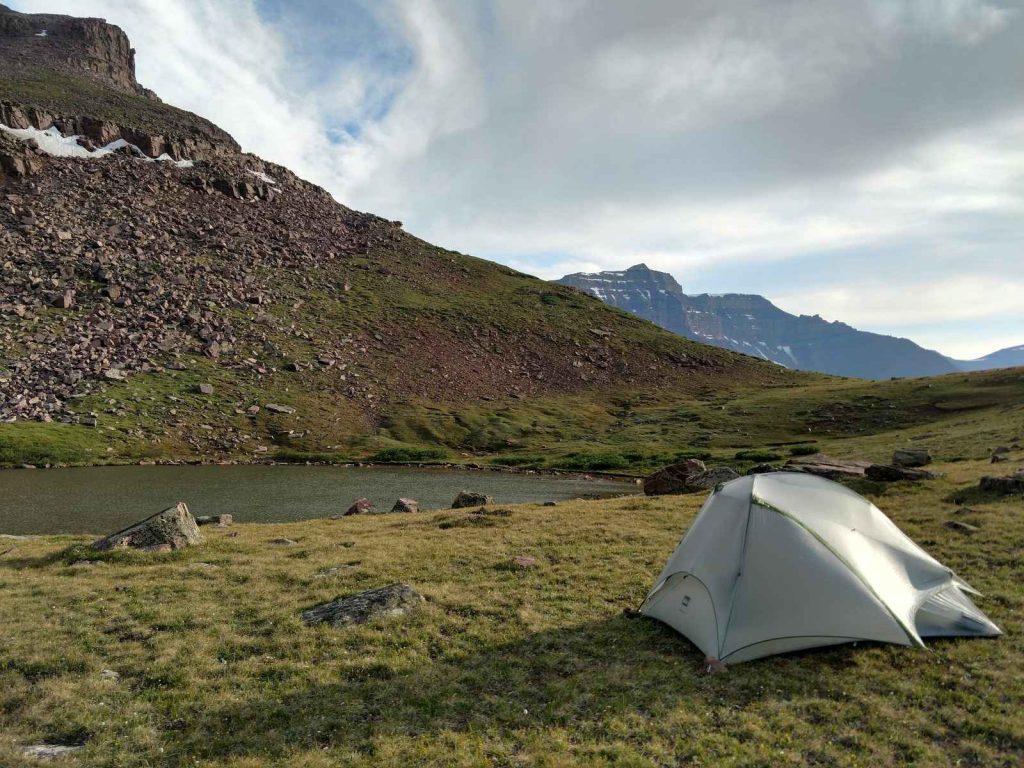 Even on a weekday, Dollar Lake felt like a small metropolis. Over a dozen groups camped down there, not to mention the many who use pack animals to bring gear. I'm sure its nice to have some social contact in an otherwise stark wilderness but I don't think I missed anything by passing up Dollar Lake as a base camp. I pushed on. Smoke from some distant wildfire began to obscure the great view of the Unitas I had on the way up so I was less disappointed in my decision to climb Kings Peak at night. I dipped below treeline and made it back to my car after about 6 hours.

Kings Peak draws a lot more people than it used to but that shouldn't deter anyone from backpacking it. I expected crowds on this trip but found if I camped off the beaten track, I was unperturbed by them. Also, the 13.5 miles of trail from trailhead to summit are enough to diffuse the larger groups so I had plenty of peace and quiet in spite of the high numbers of hikers. Lastly, Painters Basin was the number one highlight of the trip, even more than the summit itself. I hope I can return and backpack the less traveled areas of the High Unita Wilderness!
State High PointsThirteenersUtahUtah Adventures