A mid-spring hike in the Tamarack Lakes region might as well be a winter hike anywhere else. Snowy trails lead to abundant solitude A Blank Spot on the Map If you drew a line between Lake Tahoe and Mt Lassen, about halfway between is Plumas and Sierra Counties. With a combined population of less than...

A mid-spring hike in the Tamarack Lakes region might as well be a winter hike anywhere else. Snowy trails lead to abundant solitude

A Blank Spot on the Map

If you drew a line between Lake Tahoe and Mt Lassen, about halfway between is Plumas and Sierra Counties. With a combined population of less than 25,000, they're off the grid and radar to most. But that's precisely why I wanted to come here! I've hikes dozens of trails in the Tahoe region and seen plenty of the Cascades. What lies between the two? This weekend I found out about the Tamarack Lakes and Sardine Lakes Region. Between the Cascades and Tahoe, the Sierra Nevadas are lower in altitude. But you would never guess that with images like the one above. These mountains are every bit as alpine as their taller counterparts further south and they receive a similar amount of snow. Highways and trail access points are routinely closed well into May. I was thankful that the famed Gold Lake Highway happened to be open early this year. 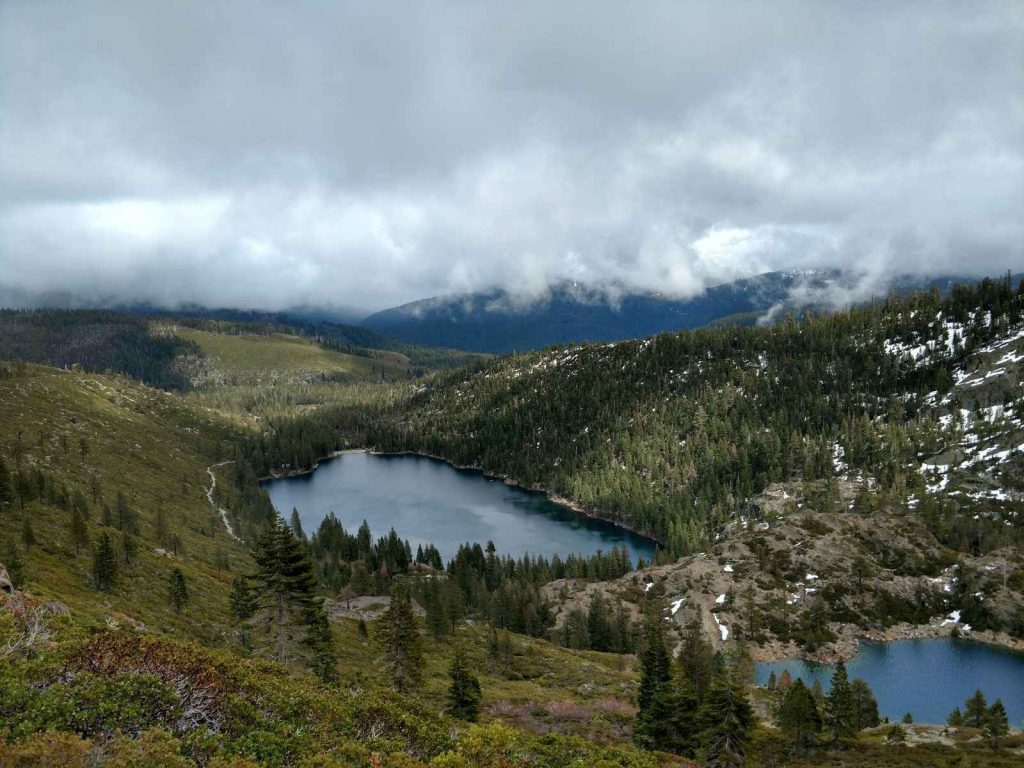 Overview of the Tamarack Lakes Hike

A favorite destination for those familiar with Sierra County are the Sierra Buttes and Sardine Lakes. Images of the buttes look like a screensaver or something from The Sound of Music. Rising sharply above glacially carved lakes, their very profile inspires awe. I never heard of this place prior to coming but every brochure and guidebook had a glossy picture of the Sierra Buttes on the front. I had to check it out!

In the summer, the network of trails leads to the ridgeline and eventual summit of the Sierra Buttes. Given that the snow was still quite deep past 6,500ft (even in late April), I settled with a classic hike of the Tamarack Lakes. This is a straightforward out-and-back hike which is 7.25 miles total. It involves some strenuous climbing on a well-marked but very rocky trail. Its a trail that has continuous panoramic views, making it a favorite of locals. Here's my map:

Views all the Way

A lot of hikes bill aw at the end, with this one I had views the whole way. Parking at a makeshift "lot" just west of the Gold Lake Highway, the trail quickly begins to gain altitude. This trail is very rocky throughout so I'm glad I had sturdy hiking boots. Early in the season, the trail is quite muddy and wet too- numerous seasonal streams crossed it. But the Sierra Buttes loomed in the distance, framed by clouds and the Sardine Lakes. Any sort of effort I had was overshadowed by the tremendous views Roughly 1.5 hours and two miles in to the hike was the turnoff for the viewpoint of upper Sardine Lake. I didn't get the chance to see this viewpoint but it seemed superfluous to me. Its not like I was lacking thus far! So I continued my upward ascent to the ridgeline and col. Up until now I encountered little snow. About 100 vertical feet shy of the col, I ran into heavy and wet snow and my snowshoes came in handy. Not surprisingly, the north-facing side of this ridgeline was deeply covered in snow. 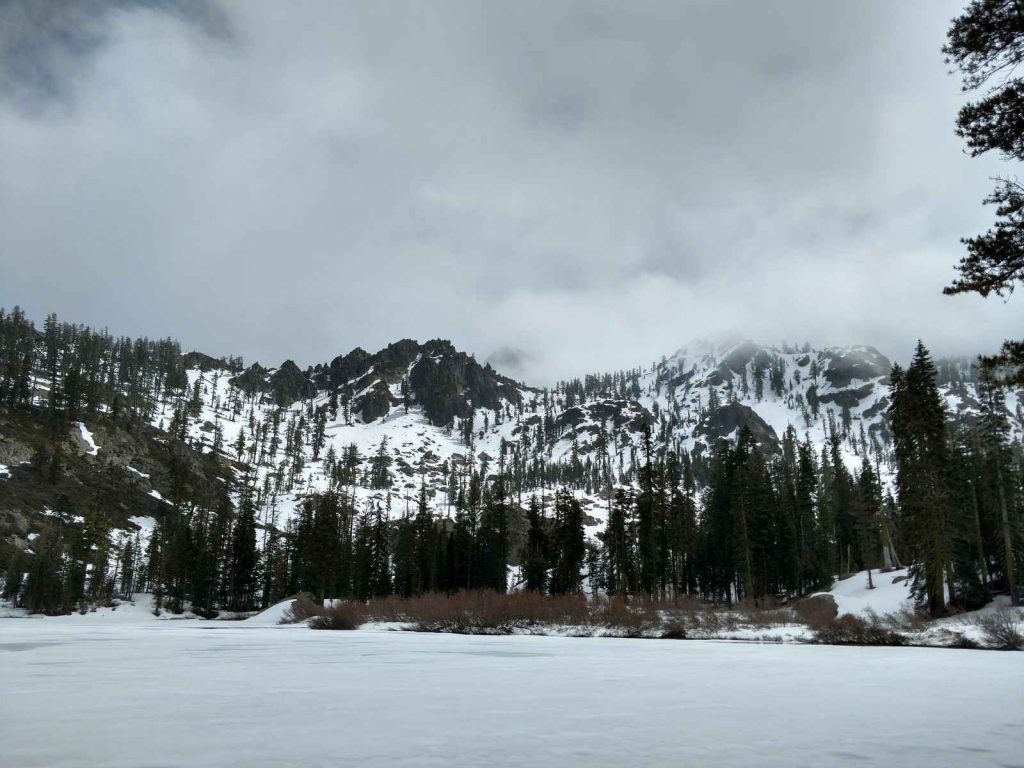 Losing about 300-400ft in elevation, I descended from the ridgeline down into the valley created by the Tamarack Lakes. The descent was not without effort but I came across ephemeral ponds which reminded me of the season. The guidebook noted that parts of  the valley can feel flooded by these short lasting streams and I certainly got my boots wet. But pushing past this section lead to the remote oasis of the Tamarack Lakes (pictured above) By this time, it was snowing hard. I had only time to briefly capture some pictures of the lower and upper lakes. It was still well worth the effort; watching clouds pass and slowly reveal the upper elevations of the Sierra Buttes was ethereal. It's possible to hike all the way to the top of Sierra Buttes from here. I didn't have the time today so I turned around at upper Tamarack Lake. I'm sure I'll be back to bag Sierra Butte at a later time. 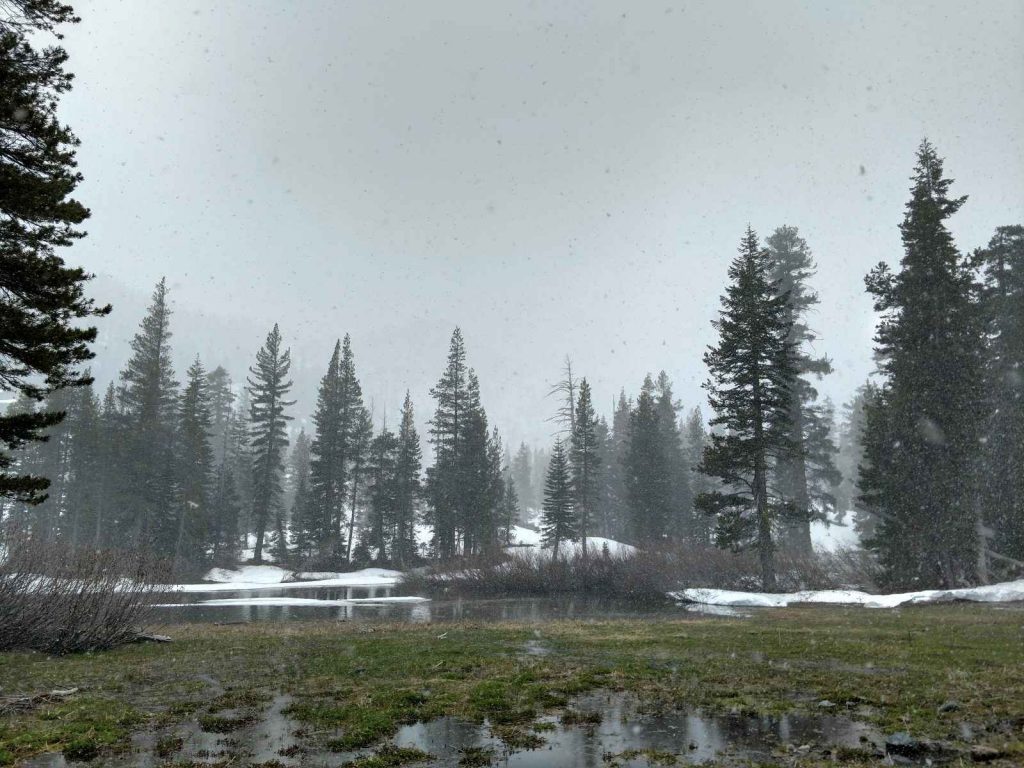 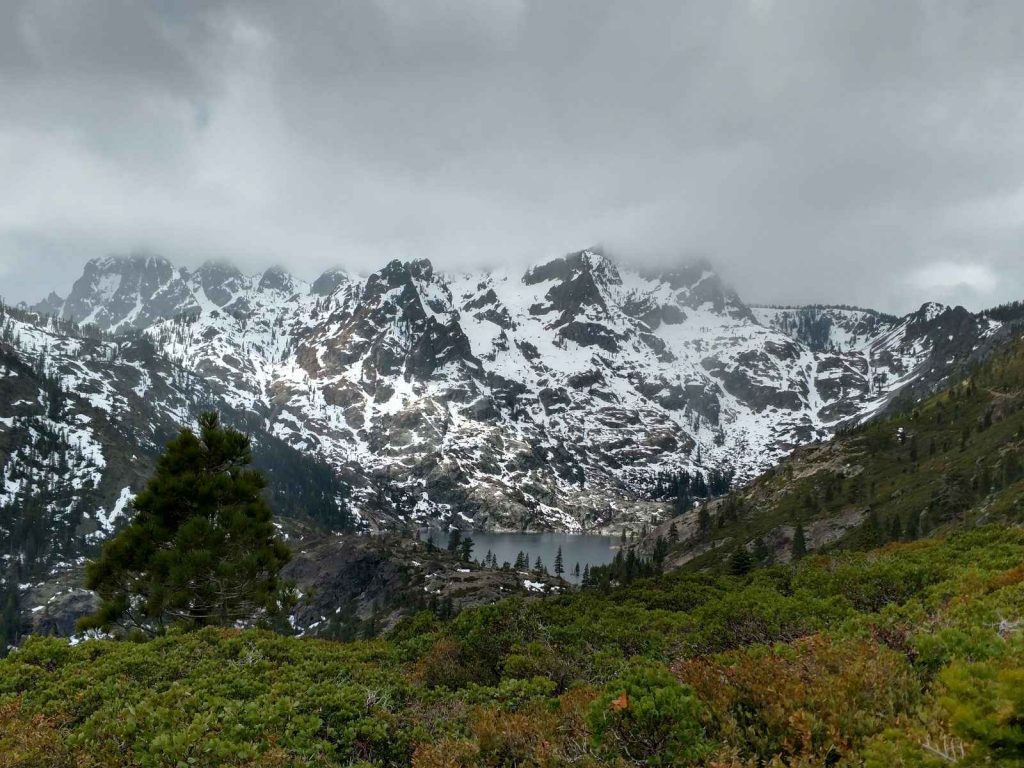 Spring is such a variable season here. Even 500 to 1,000 feet of elevation change makes it feel like a different world. Back over the ridgeline, it was snowy, cold and very windy. Closer to the lakes, it felt more like spring and I shed some layers. With my famously slow pace due to picture taking, I made it back to the car in about 5 hours. Although the high summits are essentially inaccessible this time of year, I look forward to coming back and hiking the trail all the way to the watchtower on Sierra Butte.
California AdventuresHikingSnowshoeing