My greatest adventure of my New Mexico trip was hiking the highpoint in the winter. Though an unusually dry winter made for a fairly straightforward hike, the challenge and accomplishment were excellent. A long journey’s summit Perhaps the biggest reason I did a grand road trip through New Mexico was to hike its high point,...

My greatest adventure of my New Mexico trip was hiking the highpoint in the winter. Though an unusually dry winter made for a fairly straightforward hike, the challenge and accomplishment were excellent.

Perhaps the biggest reason I did a grand road trip through New Mexico was to hike its high point, the 13,000-ft Wheeler Peak. This was my 39th state high-point and quite the adventure. It was literally furthest North, longest hike and highest altitude for the trip. Later I did see the Rio Grande Gorge and checked out El Malpais but in many ways this was the beginning of the end of my trip. Wheeler Peak is not very well known outside of hikers in Colorado and New Mexico and highpointers like myself. It has more famous neighbors; the resort towns of Taos and Red River draw most of the visitors to the area. Taos in particular boasts a thriving artists community, pleasant summer temperatures and substantial snowfall in the winter (this one being an exception). But I would have to come back for the skiing and art galleries because I had a summit to bag.

Not typically hiked in the Winter

Due to a tremendous amount of snowfall, Wheeler Peak is not often climbed in the winter. The "easiest" trail is 16 miles round trip and the shorter Williams Lake Trail is a veritable scramble in some sections (I later found out that its not so bad when snowfall is scant). Factoring in its 13,167' of altitude, its safe to say that it is cold, exposed and a bit of a risk. An alpine start was essential- I was on the trail before 5 AM. Parking at the ski resort itself, I didn't have any trouble finding a space and nobody gave me a ticket (not really sure what the rules are in the winter). The trail immidately gains substantial elevation in the first 1.8 - 2.0 miles to the saddle. I used microspikes for the most part here. The trail had well packed but somewhat icy snow. 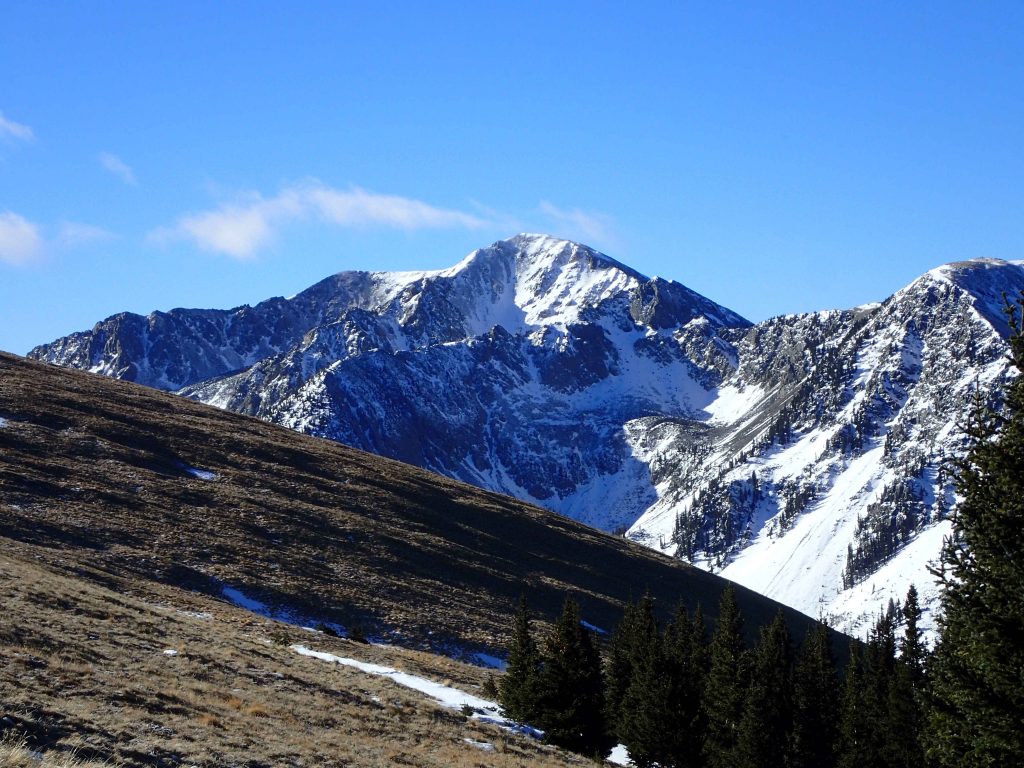 Exposed Ridgeline to the Summit

Bull of the Woods Pasture marks the saddle and served as my breakfast spot. There was not much of a pasture this time of year but it was peaceful. From here, the trail essentially heads South almost to the summit. I came across many unmarked but well traversed snowmobile trails which were confusing. It was helpful to have a topographic map and compass to make sure I was on the right route. A few snowshoe prints also guided my trip. As the trail rounds Bull-of-the-Woods Mountain, the views get expansive and glorious. These views always slow my hiking down. I get so focused on getting the perfect picture that my travel slows to 1-1.5 miles per hour. But the trail was easy to follow and I loved the alpine environment. 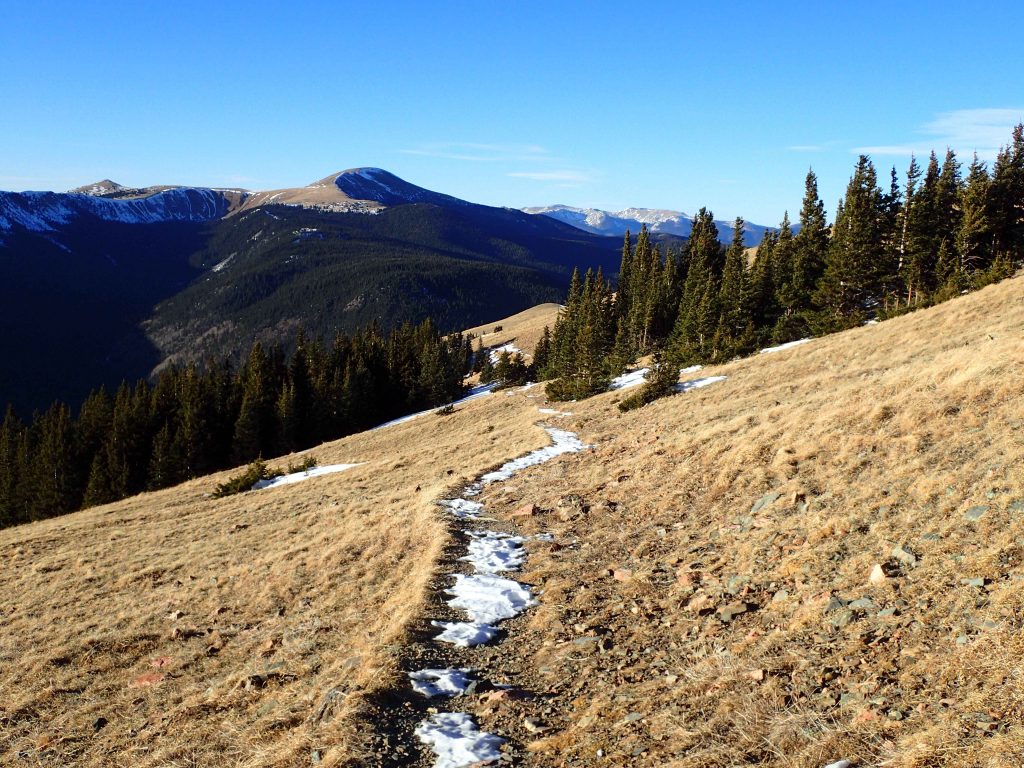 Roughly halfway between Bull of the Woods Pasture and the Summit is La Cal Basin. I found this part confusing. The trail drops several hundred feet and winds through the treeline. In the winter, I found this part disorienting. Several herd paths and clearly confused hikers left wrong trails. It also felt like I wasgoing to descend all the way back to the desert with the elevation I lost! But I eventually got to the "bottom" and slowly slogged back up. Like every tall summit, the trail has many "false summits". Even though I mentally prepare for them, I was still fooled. The rim of La Cal Basin has many small peaks that felt like the top. After something close to 7 hours of hike, the summit finally came into view. 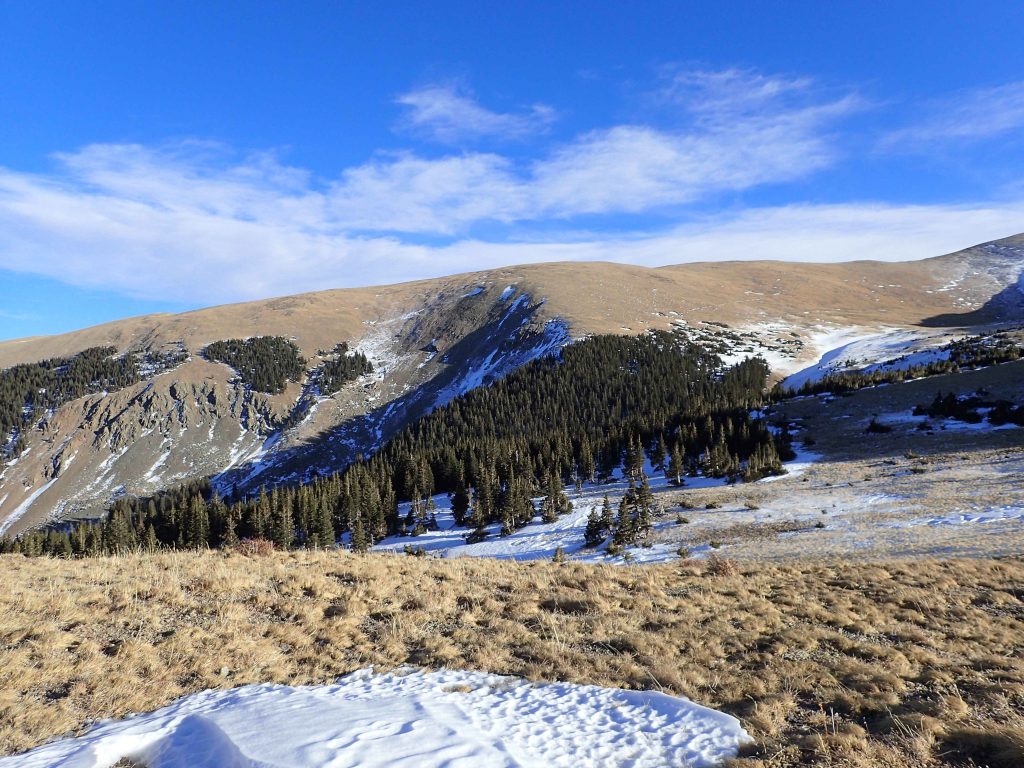 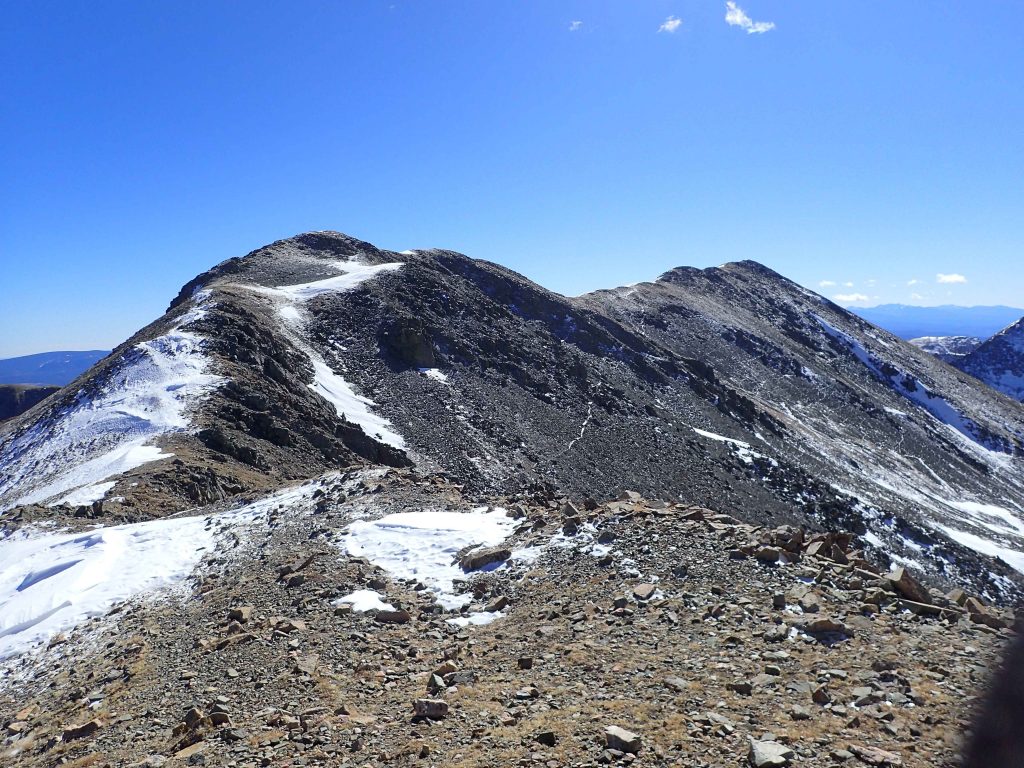 Late Afternoon Summit and Back to Trailhead

The summit of Wheeler Peak is a characteristic saddle-back and the trail crosses over the second highest "summit" before arriving on Wheeler. I caught a unique view down into Taos Ski Valley, one of the highest resorts on the continent. Also, a neat view of the Red River headwaters (Rio Grande tributary) could be seen at the top. In spite of the unseasonably dry winter, temperatures remained fairly cold, creating a glacier like scene to the several alpine lakes within a few thousand feet of the summit. And of course, I could see for tens of miles- all the way to the higher summits of Colorado and the Rio Grande Gorge. Certainly this is one of the finest high points of the country. Of course, I couldn't spend too much time on the top as the sun was already dimming. I knew that I would be hiking in the dark so I spent less than 10 minutes on the top. 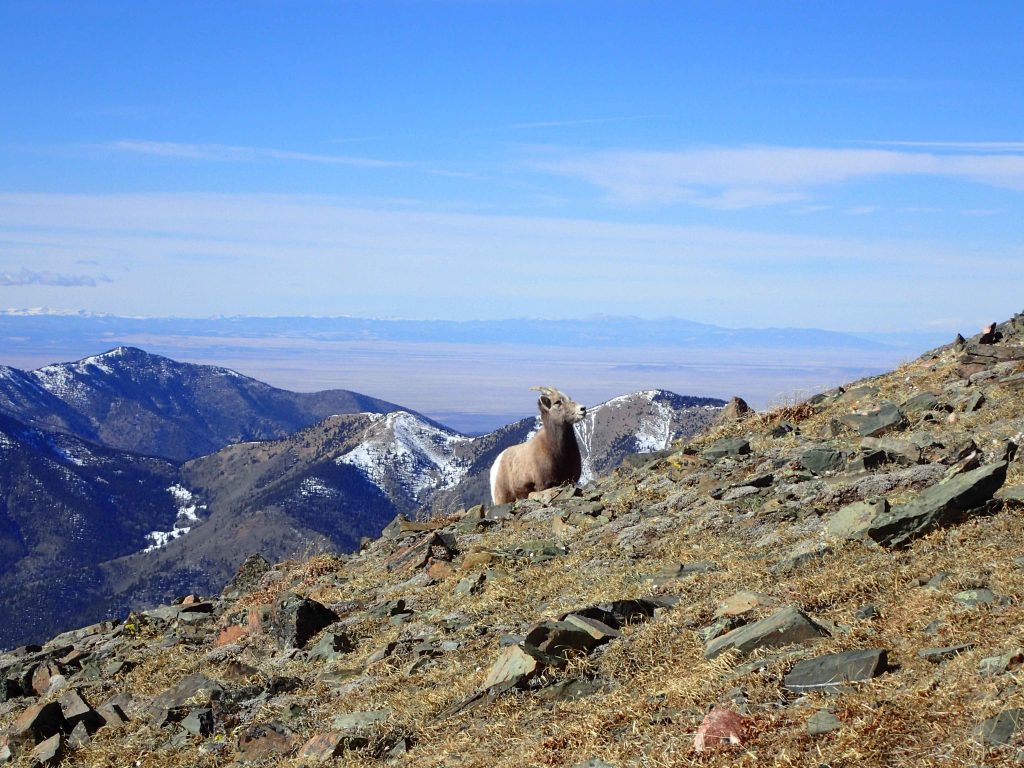 I caught a special treat on the way down- a chance to see a herd of bighorn sheep in the wild. To be sure, they are not exactly uncommon here but I've spent years hiking in the Rockies, Sierras and Inter-mountain west without seeing them. It was all the more special to catch a glimpse of this one at 12,000-ft. She followed in front of me for about a half a mile then rejoined her herd further down the slope. Again, not a terribly uncommon sight this high up but special nonetheless. I slowly winded down the mountain and managed to make it to Bull of the Woods Pasture just around sunset. From there, I was down to the trailhead after a full 15 hours of hiking. Most of the time it does not take such a long time but the winter, wind and my compulsive picture taking added to the time. Not a bad way to end a grand trip to New Mexico, can't wait to come back!