This is an easily completed 5 mile loop hike of an alpine glacial basin in the Northern Sierras. Have you ever been to Plumas County, California? For the 15 years I’ve spent in California, this was my first visit! The Sierras between Lake Tahoe and Mt Lassen seemed mysterious to me. Marked by tiny mining-era...

This is an easily completed 5 mile loop hike of an alpine glacial basin in the Northern Sierras.

Have you ever been to Plumas County, California? For the 15 years I've spent in California, this was my first visit! The Sierras between Lake Tahoe and Mt Lassen seemed mysterious to me. Marked by tiny mining-era towns and large swaths of National Forest Land, this area doesn't attract the visitors that the Central and Southern Sierras do. But that's why I wanted to come- another blank spot on the map for me.

I really lucked out here. The Gold Lake Highway is often closed well into May but on this chilly April day it was open without any issues. This paved highway is the major artery that connects to some of the best trail heads in the region. This includes the Sierra Buttes Region which I recently posted about. Here's a general map of the area and hiking route I took- Note there are a number of trailheads that access the Lake Basin region. The trailhead I chose, Round Lake, just happened to be the closest to the highway. Elwell Lodge Road was completely snowed in but in the summer its a great starting point. Both the Elwell Lakes Lodge and Gold Lake Lodge are excellent rustic resorts for summer getaways.

Hiking to Round Lake

As you can tell from the pictures, I snowshoed this route! I'm not sure when the snow completely melts but there was enough on the trail that it felt like winter. In any case, its a fairly straightfoward 2 mile ascent to the overlook. 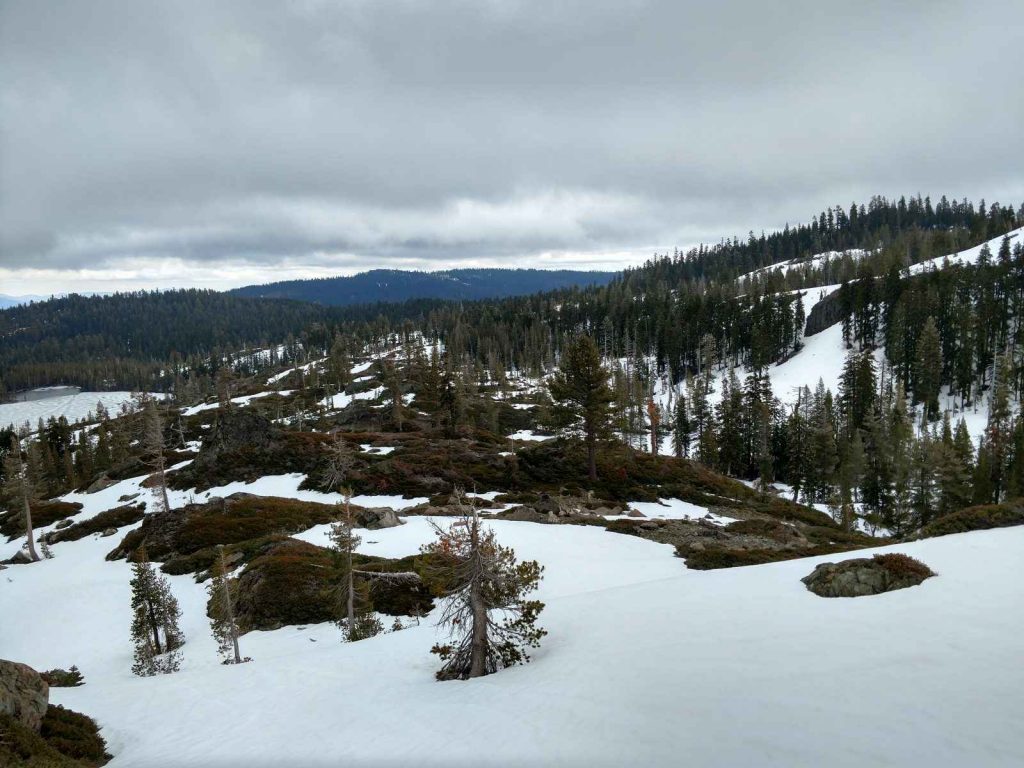 This is a fascinating time of year to hike in the Northern Sierras. Winter clearly has a hold on the upper elevations and there's little to differentiate it from February other than slightly warmer temperatures. But further down the mountain, the first signs of spring are present. I came across several ephemeral ponds and rivers of snow melt. It's like the land was getting as excited as people were for the oncoming warmer temperatures. Even some of the higher elevation lakes were starting to ice out. Of course, this made for a wet and sometimes muddy snowshoe. I'm glad I brought very sturdy boots!

Round Lake to Silver Lake

One of the aspects I liked most about this hike was that all the effort is done early and the views get better and better. For that reason, many residents of the area never tire of this hike. After about 2 miles, I reached the fork in the trail- turning left or South leads to Gold Lake. North or right is where I wanted to head. There were stunning views of the thawing Round Lake and Mt Elwell shrouded in a layer of clouds. I also came across and abandoned mine which is not uncommon for this area. The Gold Rush days have long since passed but traces of the era are bound to be seen on hikes like these. 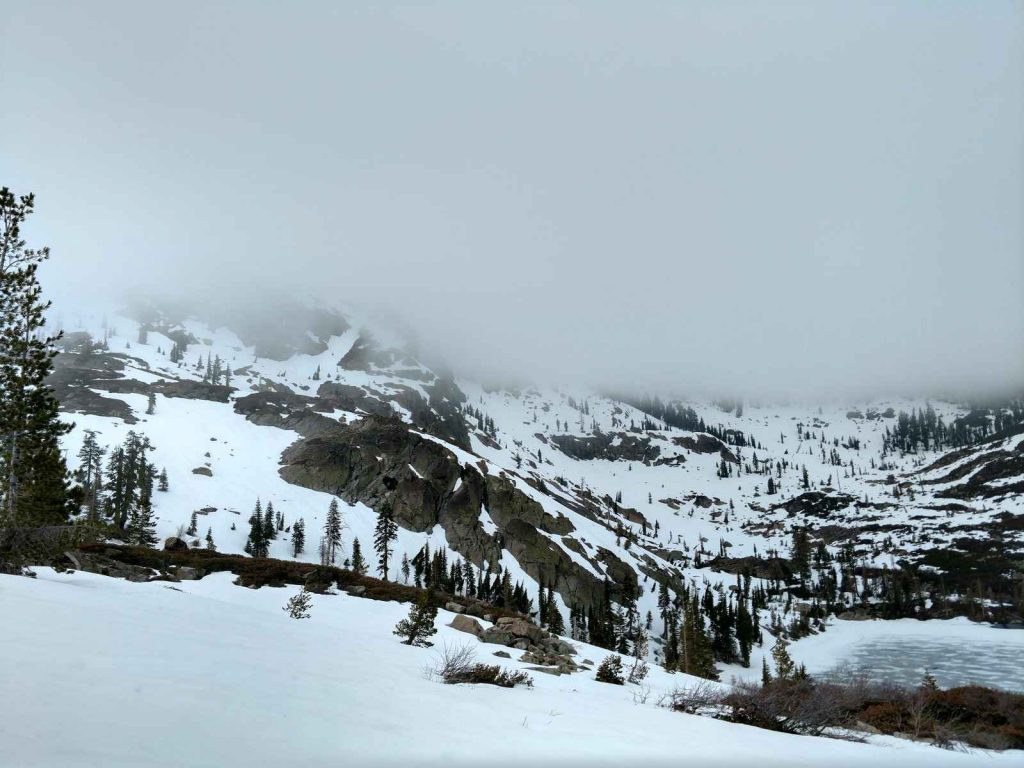 Silver Lake is the next in the chain of lakes that make up the Basin. An easy descent from the loop's "high point" lead to this serene spot. The trail hugs both lake shores and I'm sure there are abundant fishing opportunities later in the season.

Descent to the Trailhead

From here, the trail descends gently along the lake shores of Cub Lake, Little Bear Lake and Big Bear Lake. All three are worth stopping by. Each is separated by just a slight amount of elevation between them but were in highly variable stages of icing out. I chucked. 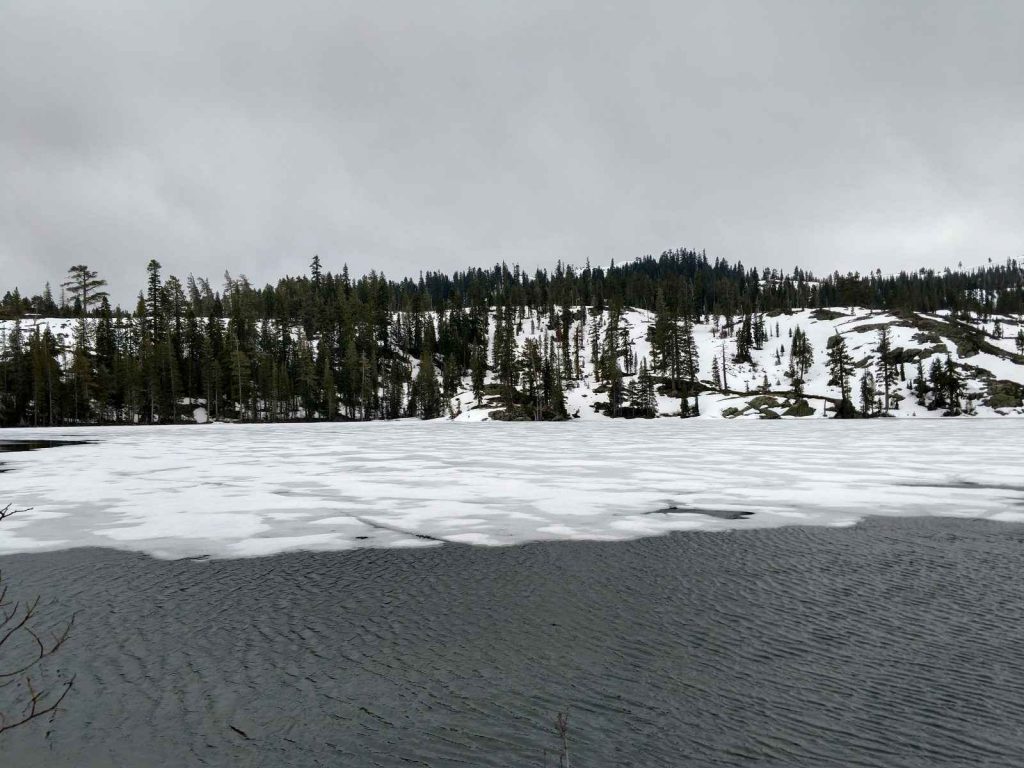 All together, the hike took me about 5 hours. This is far more than the book time due to my compulsive picture taking. I recommend this hike in the summer or fall when the trails are much drier. But the ethereal sight of an Alpine Spring made the wet snowshoe trip worth it. I'll be back in the summer, I'm sure!
Northern CaliforniaSnowshoeing