New Mexico Road Trip: 8 days, 1,600 miles on the road and 90 miles on foot I recently had a glorious opportunity to spend 8 days in New Mexico and a few in West Texas. Though I feel like I’ve traveled all across the Southwest, there was a glaring lack of trips through the heart... 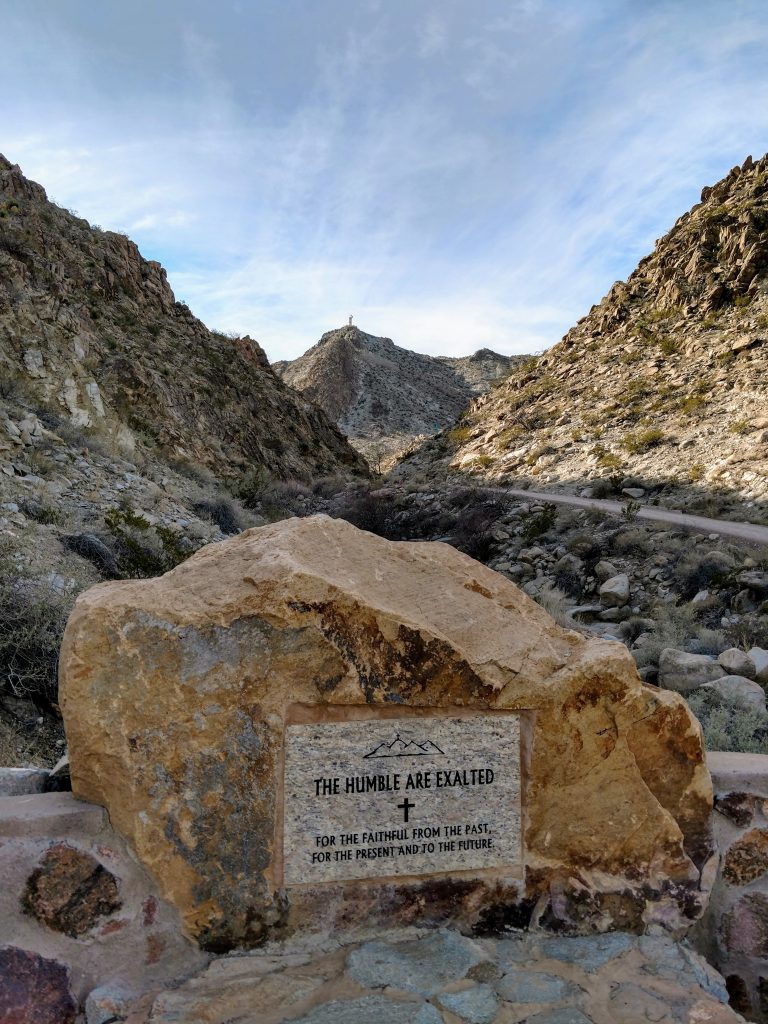 I recently had a glorious opportunity to spend 8 days in New Mexico and a few in West Texas. Though I feel like I've traveled all across the Southwest, there was a glaring lack of trips through the heart of it. Oh I remember a long time ago I did a classic backpacking trip through Philmont Scout Ranch near Cimarron. Other than that, New Mexico remains as a big blank spot on my map of travels. This year I would change that! If you've followed my website over the years, you would know I have a fairly high propensity to spend time in El Paso and West Texas in general. This is mainly due to the presence of many family members. However, there's plenty of reason to travel there, even if I knew nobody there. Mostly I've spent time in the Guadalupe Mountains and the Big Bend Region. But, there was not enough water in the river to do another float trip and I was wanting to explore something new anyways. My travels began at an unlikely though fairly unique location known as Mt Cristo Rey or "Christ the King". Its actually south of El Paso in the town of Sunland Park, New Mexico. If it weren't for the Rio Grande itself, you wouldn't know that you've crossed a state line. Most of El Paso can see the curiously rounded profile but sharp summit of Mt Cristo Rey, graced with a large white statue of Jesus and the Cross. Some assume that its in Mexico or a border monument but most of the mountain is in the US. The border fence also seems to stop as the invisible line runs up and down the mountain. Even with all the politics and bickering about the border, the mountain itself seems to retain its sacred aura.

I'm not sure who actually owns or has jurisdiction over the mountain and trail but it does serve as a pilgrimage site for Roman Catholics of the Rio Grande Valley and hence, its free to park and hike. Once a year the hike is bustling with pilgrims and can be quite the sight to see. The Mount Cristo Rey Restoration Committee has all the information you need to participate in this event. Starting out at the parking area, you will immediately notice the numerous crosses and religious imagery as you climb the peak. Combined with the natural environment of the desert, the hike is gloriously unspoiled in spite of its location on the border. All the hallmark flora of the Chihuahua Desert can be seen in the 2.2 miles it takes to get to the summit. I'd recommend taking this hike slowly for that reason! 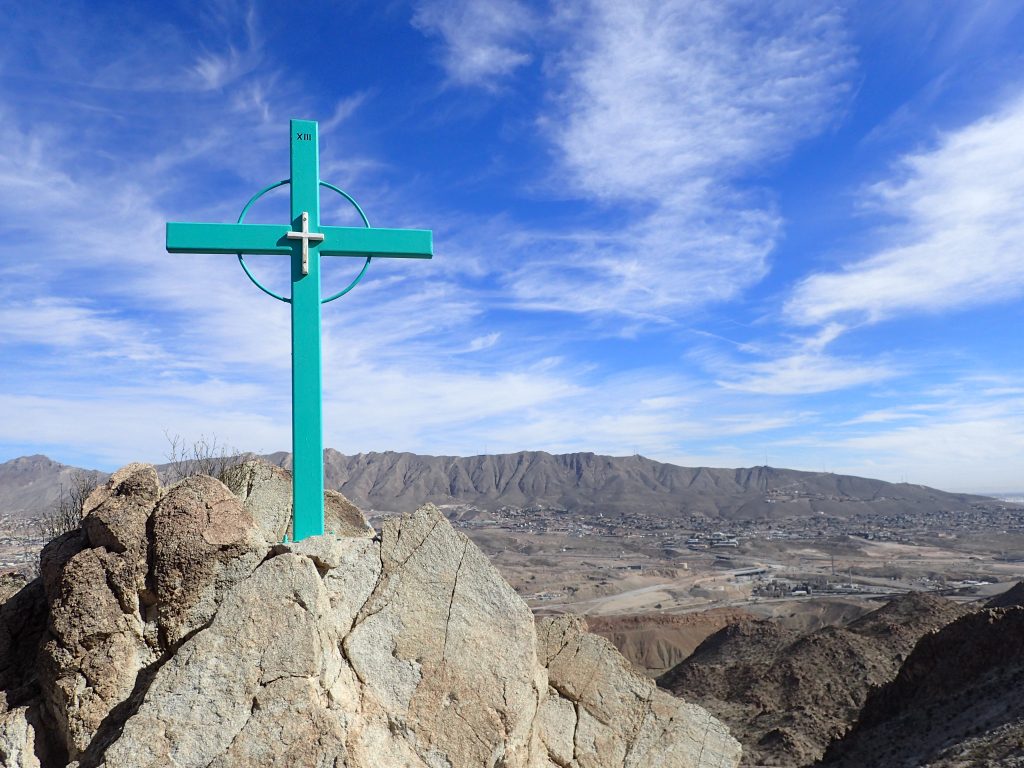 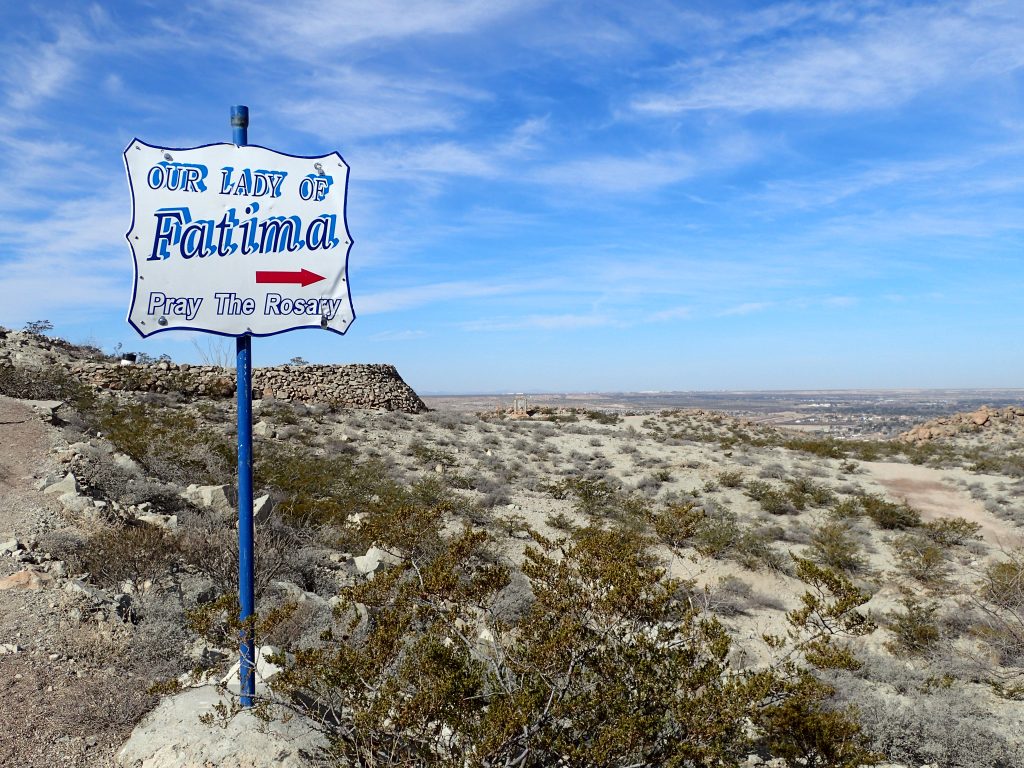 In general, the trail is moderately steep. The most elevation gain is in the beginning but it flattens out in some sections as it wraps its way to the top. I think the road must be made to be traveled by 4x4 vehicles as it doesn't have the steepness encountered in other nearby trails of the Franklin Mountains. About 1/2 way to the top, the border fence between New Mexico and Mexico becomes visible. (I learned recently that New Mexico was actually named before Mexico - isn't that interesting?) Its quite the scene- North of the fence, the suburbs of Sunland Park begin to thin out and I presume you're not allowed to go right up to the fence (we tried). On the Mexican side of the fence is the barrio of Anapra which is part of Ciudad Juárez. I'm told its a particularly poor and blighted part of the sprawling metropolis. We were close enough to see people going about their business with the fence looming over. Once it intersects the topography of Mt Cristo Rey, the fence just seems to abruptly stop. I thought about all the jackrabbits, snakes and coyotes that probably cross over the border, probably none the wiser. We, on the other hand, were routinely buzzed by the helicopters of customs- 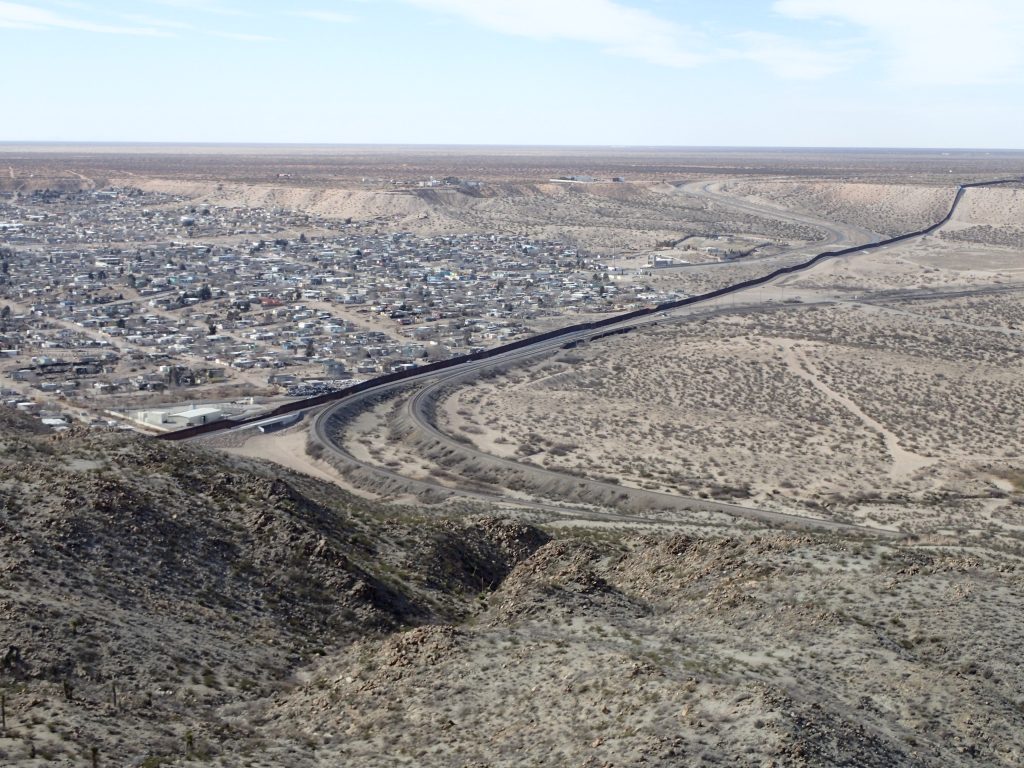 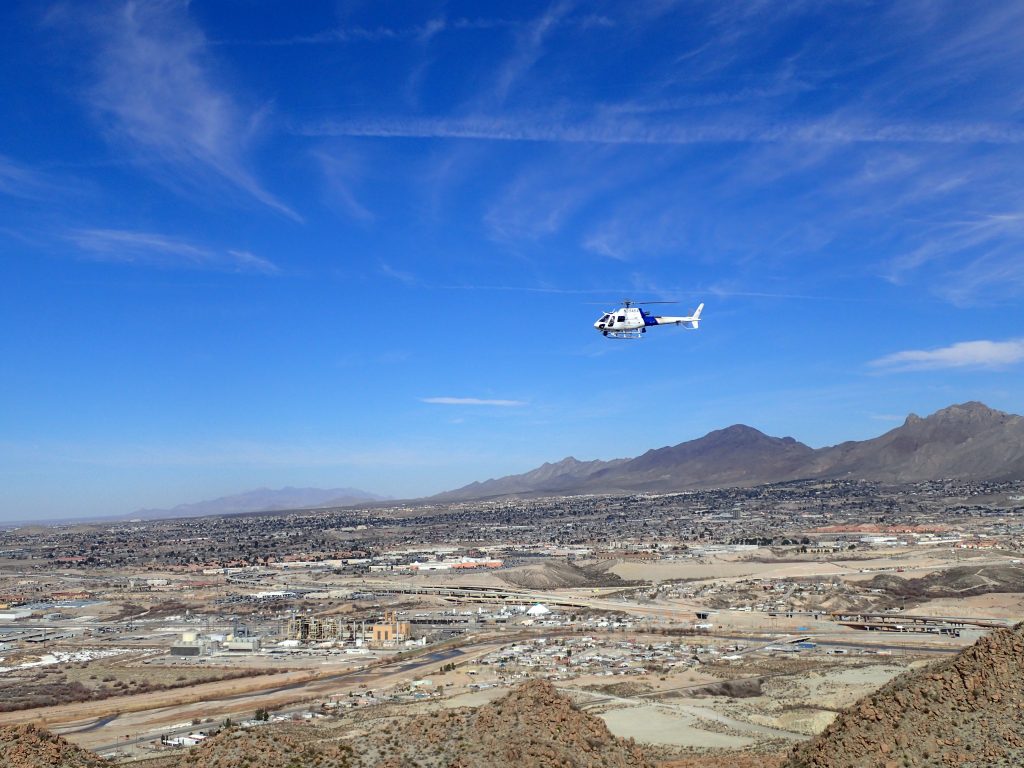 As we approached the true summit, we were far closer to Juárez than we were anything in New Mexico or Texas. Views abounded and at the summit itself, we had a 50 mile panorama. The 29 foot statue of Jesus was completed after the site became a pilgrimage destination. It was completed by scuptor Urbici Soler who funded a large part of the construction itself. The cross has been continuously standing and maintained by volunteers since October 29, 1939. Memorial plaques dedicated to former residents of the Rio Grande valley are at the base as well as the crown for the 12 disciples. We saw less than a dozen other hikers on the day we did it. In spite of its proximity to the border, the place is tranquil and quiet. 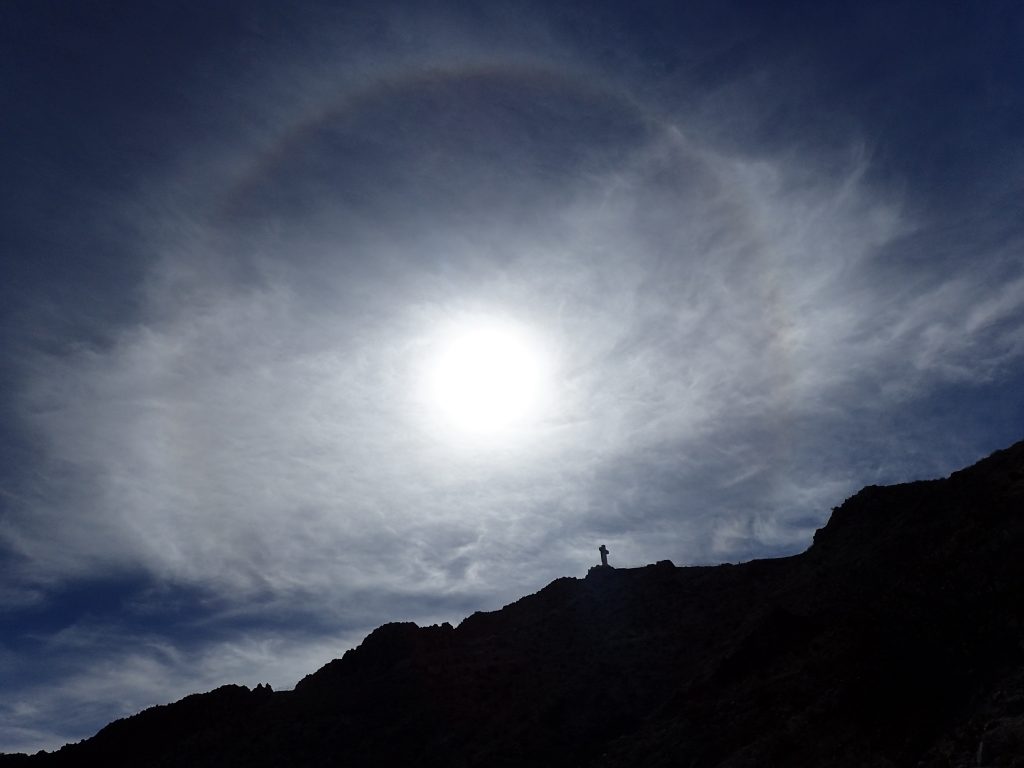 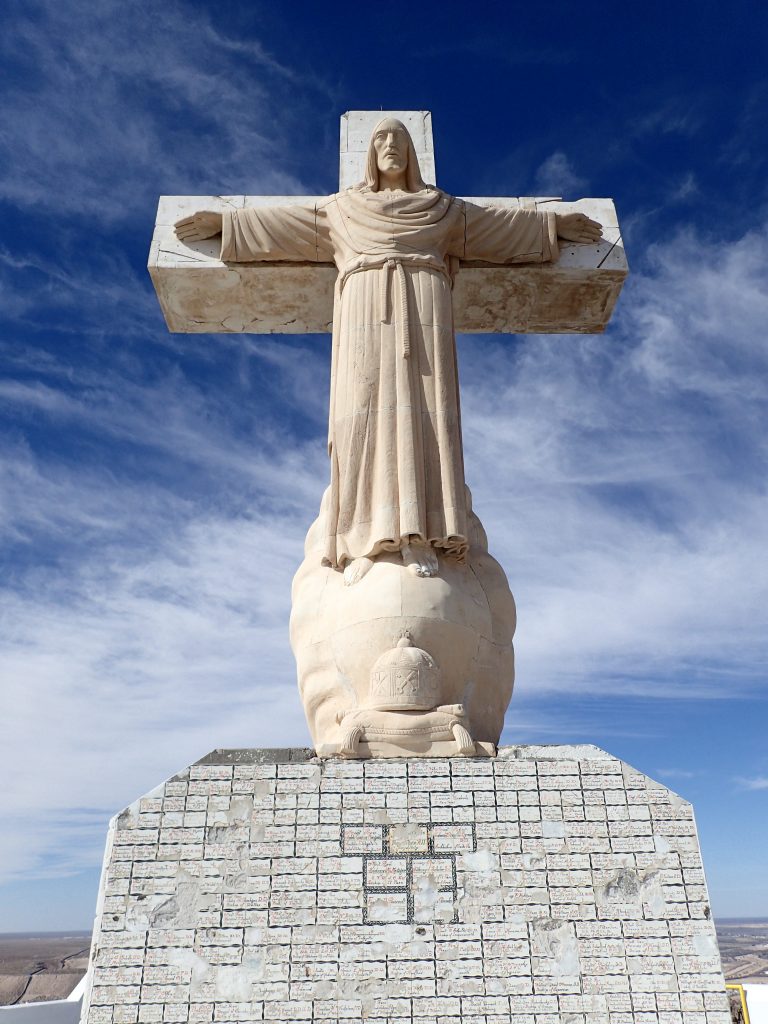 Overall, the hike can be completed in about 1/2 a day. There are no services at the trailhead and no water sources throughout the hike so bring your own supplies and gear. Pathfinding is easy however and a map is probably not necessary. People have suggested that it would be beneficial to notify the Sunland Park Police Department prior to hiking as incidents of vandalism have occurred in prior years but I think that's been quite rare lately. No special permits are needed and it is not necessary to have a passport to complete this hike. Anyone who does it will be rewarded with unique views of West Texas, New Mexico and Mexico and many will appreciate the spiritual side of the hike as well. From here, I headed North to Las Cruces to check out to Organ Mountains!