Carlsbad Caverns is New Mexico’s only National Park and was a great first stop on a grand road trip of New MexicoSo it began! I rented a car in El Paso and I was off to see everything I could in New Mexico in about 8 days. If you’re familiar with New Mexico, you would know...

So it began! I rented a car in El Paso and I was off to see everything I could in New Mexico in about 8 days. If you're familiar with New Mexico, you would know that 8 days is hardly enough time to even scratch the surface of the expansive state (5th largest in the country). People associate New Mexico with either deserts or pueblos but there's a lot more to it than that. Though I've traveled all around the Southwest, it had been a long time since I had been here. Finally I had the opportunity and my first stop was Carlsbad Caverns National Park.

Driving out to Carlsbad Caverns

The road from El Paso to Carlsbad Caverns is a destination in itself. Once you leave the outermost settlements of El Paso and cross over the Hueco Mountains, you are in frontier country. Cell phone reception instantly drops off as you drive the wide open spaces of the Chihuahuan Desert. To the North, you can see the ancient and presumably extinct volcanoes on the Texas-New Mexico state line. I presume they are rarely climbed but create an ethereal site when you're driving otherwise flat land. Eventually you come across the Guadalupe Mountains and El Capitan which probably looks much the same as it did for western-traveling pioneers. 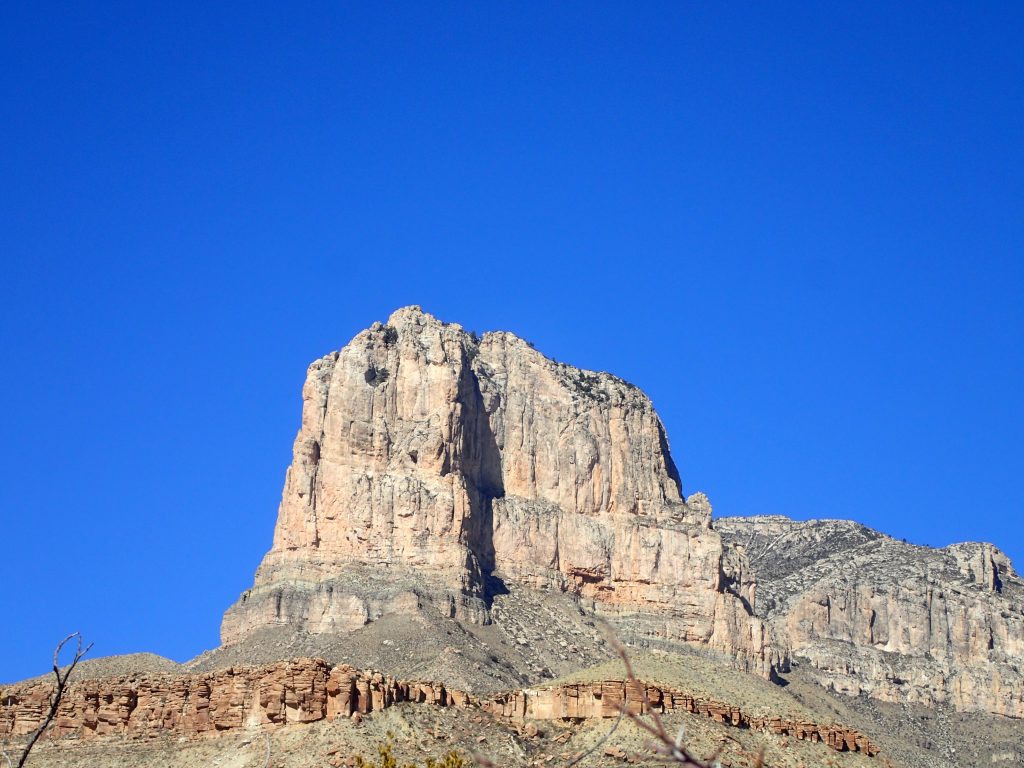 The gigantic monolith is often mistaken as the highpoint of Texas but its actually Guadalupe Peak just behind it who claims the title. On the way to Carlsbad, the road takes a great climb to the plateau and views abound.

For a cave with a room that could fit the Houston Astrodome, it sure keeps an otherwise low profile! Sure there is a well-traveled road out of nearby Whites City but you would never guess one of the largest caves is in these foothills! I decided to take the hike down from the Natural Entrance- the fee was complimentary with my NPS Annual Pass.   The paved hiking trail is almost all downhill until you're nearly 800 feet below the surface. This really is the best way to see the cave (I can't imagine what it was like for earlier explorers to navigate this though). Interpretive signs pointed out to 300,000 ton "boulders" that occasionally fell in the geological history of the cave. Stalagmites rose to the height of six story buildings which is a process that can take millennia.

With every turn there seemed to be a new wonder awaiting. Being the compulsive photographer that I am, I must have taken over 1,000 photos in three hours of hiking. Cave photography is notoriously difficult as perspective is entirely lost. So while I tried, I didn't think I even remotely captured the immense size of the cave.

I've explored caves across many states and parks and there are a few things that take the cake in Carlsbad Caverns. First, I don't think I've ever seen larger cave formations. It is astounding to see how tall the stalagmites are and to think of how much time it takes to make them. The one above is the largest in the cave and it was like standing next to a skyscraper.

Second, the "Great Room" is just too big for words. You almost wonder whether it was blasted or otherwise artificially created to make it seem that way but other than the path and the lighting, everything is natural. It feels like you're in the center of the Earth. There are several holes that seem to have no bottom and a few small "lakes" and "rivers" created by the ongoing geological processes forming the cave. I just don't think the human mind is able to really grasp the time frame caves are on but its fun to speculate what the cave will look like in another 500,000 years.

I'm so glad I finally saw this place that I've been meaning to get to for years. Plus, its a great place to start a road trip of New Mexico! From here I headed North through a couple of very interesting pioneer towns where the planes meet the mountains; Artesia and the City of Carlsbad. Wish I had more time as I would have loved to check out some of their history. But I took a turn out west and climbed the grade all the way to Cloudcroft, the next stop on the road.
New Mexico