Easy spot for hiking and birding on the shore of Hayward. There are several hundred parks, open spaces and protected lands in the Bay Area and nearly all of them are ripe for adventure. Though I love traveling around the country, I’ve found that there’s enough variability in environments around the San Francisco Bay that...

Easy spot for hiking and birding on the shore of Hayward.

There are several hundred parks, open spaces and protected lands in the Bay Area and nearly all of them are ripe for adventure. Though I love traveling around the country, I've found that there's enough variability in environments around the San Francisco Bay that you would never have to travel far to find something new. I've begun to chronicle my adventures across the numerous public lands of our region through this series.

Hayward Regional Shoreline and the Interpretive Center are located right at the eastern end of the San Mateo Bridge of Route 92 in Hayward, California. We've passed by the warf-looking building of the Interpretive Center dozens of times in our travels and always thought we would like to check the place out. Last weekend it was a balmy 65 degree weekend (in January!) and thought this would be a perfect time to see it.

The main draws of the park are the flat, easy trails that flow through several marshes and tidelands. Its a perfect spot for a family hike and welcoming of children. Hybrid and mountain bikers might like to take a spin on the trails as well which seam to meander along the shore for miles. 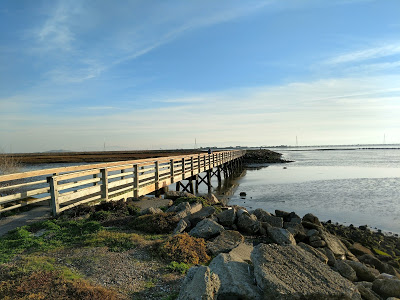 Parking can be somewhat limited at the Hayward Shoreline Interpretive Center but we did not have trouble finding a space, even on a Saturday with pleasant weather. There are several other trailheads and parking locations you can see below on my map. Public Transportation options are somewhat limited although AC Transit Bus #86 and Bus #83 place you somewhat close to the entrances also shown below (about 1/2 to 3/4ths of a mile walk to the park from the stop in both cases). Rideshares from the Hayward BART station would be another easy way to access the park if you are car-free.

At the Interpretive Center, there is a small area with exhibits of common animals of the area. I was surprised to see how much they had! Their fish tank had numerous local dwellers and a leopard shark. It was also the first time I saw a California Giant Salamander was at their exhibit (note that they are not actually residents of the East Bay). A small tower at their site would be perfect for bird watching on a blustery day in the winter.

Its a great family destination and we noticed many families with small children on walks. I suppose with a stroller prepared for dirt roads, one could even take toddlers or babies on the trail! We noticed a few families had waders and mud boots on and were finding all sorts of crustaceans in the muck of the marshes. Dogs are not allowed in the southern section of the park (South of West Winton Ave)

The biking of the park is fairly gentle although it is mostly dirt/gravel roads. Some people seemed to be getting by fine on whatever bike they had on hand though there were a few hybrid bike riders. I think I'd prefer this to road biking. 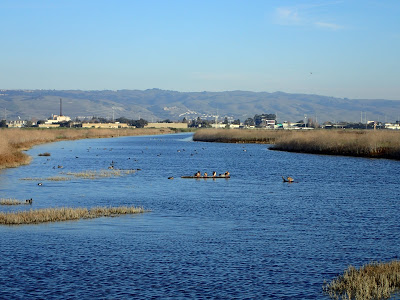 Wildlife viewing and specifically birding are fairly accessible. I regret that I did not bring a good pair of binoculars and a bird reference book as the marshes were positively teeming with life. Herons and bright white Great Egrets are a common sight but no less majestic. They sure do a good job of keeping themselves clean in spite of all the water and mud! Hayward Marsh itself had more ducks that you could ever count. Of the few species I'm familiar with, congregations of Northern Shovelers, American Wigeons and Lesser Scaups seemed to be enjoying the day as much as us. I'm fairly certain I spotted a regal Peregrine Falcon that day which can be a common sight on days of nasty weather.

From a trail runner's perspective, its probably less of a destination given that the place is mostly flat. I'm sure some would appreciate the straightforward nature of the gravel roads but I tend to prefer the hillier runs just east of here in the Hayward Hills. 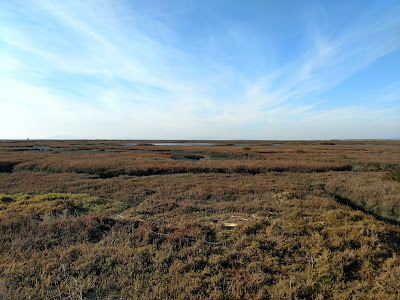 So there you have it- a perfect little stretch of nature just north of the Route 92 bridge and close to pretty much all of us in the Peninsula, South Bay and East Bay. Hope you don't miss this one!