A wonderland of waterfalls The more I travel through Indiana, the more I’m convinced that it is the most underrated state for the outdoors. I was not expecting to make it this far South into the state but after spending a little time looking at some guidebooks, I couldn’t imagine missing a place as gorgeous...

A wonderland of waterfalls
The more I travel through Indiana, the more I'm convinced that it is the most underrated state for the outdoors. I was not expecting to make it this far South into the state but after spending a little time looking at some guidebooks, I couldn't imagine missing a place as gorgeous as Clifty Falls State Park. With four named waterfalls and dozens of other cascades, the hiking and photography are pristine.

Along the banks of the Ohio River, the land becomes noticeably more rugged. Bluffs over the river tower 100-200ft above the banks. I found the drive from Cincinnati to Madison, Indiana to be particularly scenic and I was a bit sad that I didn't spend more time in this drive. Nevertheless, one of the best state parks I've seen in the Midwest was my destination for the day. Here's an overview-


As you can tell from the topographic map, there's a great deal of elevation gain and loss in the region. I've labeled all the highlights of the park but there are miles of hiking trails that are also worth seeing.

If you enter the park from the South, the first highlight is the Lookout Tower which is close to the Clifty Inn. The view of the Ohio River Valley is extraordinary. Its a quickly completed hike that's more of an appetizer of what's to come rather than the main course.
Continuing North on the main park road, Hoffman Falls is the first significant waterfall that can be seen. The viewpoint for this falls is a few hundred yards past the parking pullout. Actually, this is somewhat of a lousy viewpoint. I'd recommend continuing on the trail which forks going east and west where better vantage points await. We just had a thunderstorm the night before that was quite intense, meaning the waterfalls were all flowing with tremendous force.

The trails leaving from Hoffman Falls do get deep into the canyon and I would highly recommend turning it into an extended day hike if you have the time and stamina. Bring very sturdy boots or shoes that can get wet! 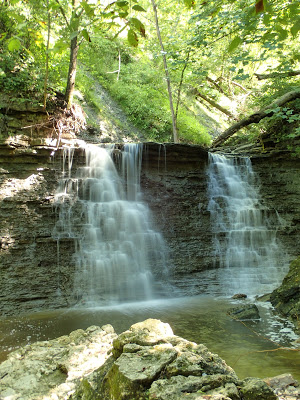 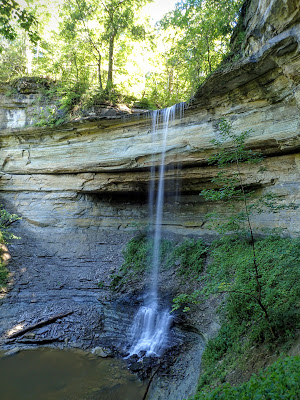 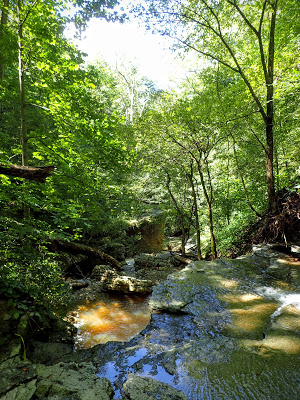 Pictured above is the tunnel- a two entrance passage that is a bit of an adventure walking through. Initially I thought it was completely natural though its flat bottom and uniformly oval-shape betrayed its man-made status. This was an earlier attempt at a railway tunnel though it proved to be too difficult to maintain. The hike through gets very deep into an unlighted portion of the cave and a flashlight is essential. On the other end, the trail rejoins you. Nearby is Tunnel Falls which is taller and drops a greater volume of water than Hoffman Falls. However it is also more visited so I'd recommend not missing the former.

Continuing North brought me to the piece de resistance pièce de résistance of the park; Clifty Falls and Little Clifty Falls. A prominent notch is created by the confluence of two smaller creeks which is full of magnificent scenery. The roar of Clifty Falls can be herd long before it can be seen-
Clifty Falls can be seen with minimal effort and a wheel-chair friendly path leads to an extraordinary vantage point. Hiking a little further on the trail brings you to another cliffy viewpoint as well as Cake Rock and Little Clifty Falls. It was hard to take a bad picture in such a photogenic place!

Had I more time, I would have liked to have hiked Trail #2 which is a fairly rugged trail that brings the hiker just below the final drop of Clifty Falls. Rarely appreciated by the majority of visitors in the park, this is the place for the finest appreciation of one of Indiana's largest waterfalls.

As for me, I had more parks I wanted to see that day, so I'll save that hike for the next time I'm out here, which I hope is not too long from now!