This weekend we took an intriguing trip to the capital city of Springfield, Illinois. Steeped in Abraham Lincoln history and Illinois lore, it was a surprisingly enjoyable trip for this traveler who generally prefers mountains and wilderness. Mr Lincoln’s original Springfield home, preserved for 175 years I’m getting settled in to a new way of...

This weekend we took an intriguing trip to the capital city of Springfield, Illinois. Steeped in Abraham Lincoln history and Illinois lore, it was a surprisingly enjoyable trip for this traveler who generally prefers mountains and wilderness. I'm getting settled in to a new way of life up here on the third coast. Most of our weekends have been spent busily furnishing the condo or exploring Chicagoland. Something that both of us have wanted to do for some time is visit the capital- Springfield. The obvious historical appeal along with seeing the newly famous Abraham Lincoln Museum and Library was enough for us to make the 3 hour trek from Chicago. We had a delightful time. Driving three hours across Illinois allowed me to appreciate the meaning of the "heartland". I can't say it was a particularly glorious drive but it was nice to see where all of our food comes from. Every so often there was a hill or forest but for the most part it was farms. Bloomington-Normal was a rurally-metro area that we briefly toured through. Once we finally arrived in Springfield, we checked in to the Lincoln Hotel and began our weekend. Springfield is a sleepy town, to be sure, but in the downtown area retained its quaint historical character. Now, in a state who's motto is "The Land of Lincoln", nearly every single town and parcel of land tries desperately to connect itself to one of our country's greatest leaders. So I'm quite hesitant to drive somewhere just because it is, in some obscure way, connected to Lincoln. Springfield, on the other hand, is his de-facto hometown and where he spent much of his adult life. Most the historical sights in Springfield are much more meaningful than where you would find elsewhere. The sites cater to both the casual explorer and dedicated historians. The town is fully integrated around Abraham Lincoln's original time. The architecture and layout is very Midwestern which could be mistaken as dull but is actually complimentary to its storied past. For example, we were able to walk right by Lincoln's original law offices, across the way from the Old Capitol. (Lincoln was a mostly self-taught lawyer, I discovered)We were not expecting much from the old capitol but it ended up being fascinating as it was critical to Lincoln's rise to power. Most everything has been preserved and the building looks almost the same as it did 150 years ago. Court rooms and offices were much smaller back then; must have been difficult for a 6'4" lawyer!   From here, we visited one of the crown jewels of the town: The Lincoln Home National Historic Site. This is actually the only National Park Unit in Illinois but it is one of the more fascinating historic sites in the system. Not only is his home preserved, the entire neighborhood of houses remains as it was during his non-presidential life. Lincoln's story is a true "rags-to-riches" story and his historic home points towards this. In the Lincoln Museum, you can see an almost-exact replica of the tiny and famous log cabin he was born into. The house in Springfield is a two story semi-mansion which would be impressive even in this day and age. Not knowing we would be allowed to enter, a friendly park ranger took us all around the house as we viewed his original living room, kitchen, study and bedroom. I could not believe they were able to preserve all the original furniture, fixtures and wallpaper. Mr. Lincoln wasn't raised in severe poverty but his beginnings in Kentucky were humble. His entire life was plagued by untimely deaths. However he was self-taught and educated which allowed him to rise to prominence in this capital city. Interestingly enough, Lincoln is actually considered one of the least wealthy presidents. He was also one of the only presidents to neither inherit, marry in to, nor amass a great deal of wealth throughout his life. While we had enjoyed our tour through the past, we were able to find something that catered much more towards our Millennial tastes at Obed and Isaacs Microbrewery. Flights of delicious beer and plenty of American food reminded us of which time period we were living in. Later that night we enjoyed the holiday parade across town. The sleepy streets were almost instantaneously crowded with residents and good company. Even the current Capitol Building had extensive lights and decorations. I'm glad we came during the holidays. Our second day was just as delightful. Breakfast was spent at Café Andiamo. It was nice to have a tasty breakfast that was filling but not thousands of calories. The coffee was great too. From there we headed to the pride and joy of Springfield: The Abraham Lincoln Museum and Library. 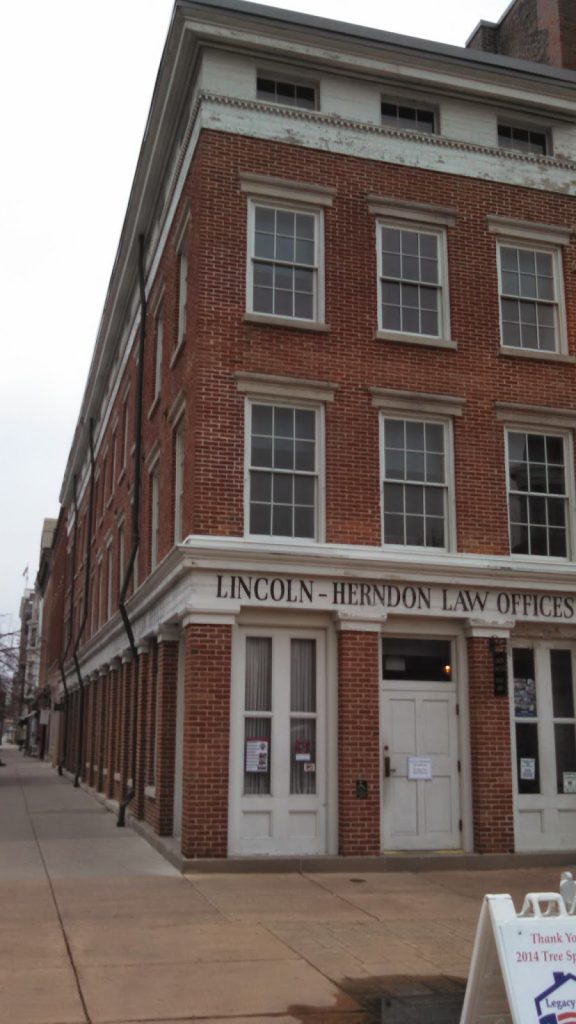 This place has been called one of the best museums of the 21st century. I'm not a museum buff but I can see why people would make such a statement. The exhibits are historical and informative but presented in a very modern manner. Our favorite exhibit was the "Ghosts of the Library" presentation which was a mythical blend of acting and special effects used to tell the story of the extensive preservation of Lincoln's life. Of course, it was no small joy to my librarian significant other seeing fellow librarians presented in deservedly heroic manner. The layout of the museum is in line with Lincoln's life and presidency. After one and a half centuries of time, we view Lincoln in a very positive light but his presidency was anything but glorious. As a lawyer, state politician and president, Lincoln's life was as tumultuous and murky as any modern politician's. Exhibits are designed to make you feel the immense weight of the country on his shoulders and how much doubt was casted upon him from both his supporters and detractors. The Eyes of Lincoln exhibit shows the change his eyes and face went through during the Civil War- telling signs of the stress and uncertainty that he faced. While we give him great honor in our time, it appears that he probably received very little until just about the end of the Civil War. I'm thankful the museum showed just how difficult his life was. Our final visit before heading back home to the bustle of Chicago was Lincoln's final resting place. His tomb is designed somewhat similarly to the Washington Monument although it's comparatively humble given his contribution to the country. However its appropriate that he was buried in Springfield instead of Washington seeing has he called this place home for much of his life. Actually visiting his hometown and literally walking in his footsteps around the area gave me much more appreciation for his life than my past trips to Washington or my elementary school civics class. Seeing his history as a young adult allowed me to appreciate the not so glamorous aspects of his life that are often forgotten when remembering famous politicians. I'm not sure what I was expecting before I came to Springfield but we both left with greater understanding and reverence for our 16th president. As is customary, we each left a Lincoln Cent of our birth years at his tomb. Read. Plan. Get Out There!