Onward with some more caving adventures! Hopefully you had a chance to check out my previous post on the Top 10 Caves in National Parks. I’m continuing with some more excellent caves and lava tubes in Oregon, Washington, California, Utah and of course, New Mexico! Ape River Cave, Mt Saint Helens #6 Ape Cave, Mt....

Onward with some more caving adventures! Hopefully you had a chance to check out my previous post on the Top 10 Caves in National Parks. I'm continuing with some more excellent caves and lava tubes in Oregon, Washington, California, Utah and of course, New Mexico!

#6 Ape Cave, Mt. Saint Helens National Monument, Washington
Chances are, you've heard about Mt Saint Helens and might even be aware that it is often climbed by novice hikers. The volcano is actually preserved by the National Forest Service as a National Monument and there's much more to explore than just the mountain! Ape Cave is the longest lava tube in Washington at just about 13,000ft long. It was not created by the 1980 eruption of Mt Saint Helens and was actually mapped out by Boy Scouts in the 50's! There are two entrances to this cave and two "routes" to follow. From the parking lot, there is a large entrance with a stairway that takes you in to the middle of the cave. If you take a right, you can explore the easier section of the cave which follows a relatively flat 1.5 mile round trip route. Although it doesn't require climbing, it is very easy to make a mis-step and fall onto sharp lava rocks. If you take a left after entering the cave, you can try and complete the challenging upper portion of Ape Cave which isn't technical but is a scramble at many places. The upper cave is 1.5 miles long and goes through some rough rocky terrain. However, you can make it a one-way trip- there is another exit and the end of the upper route. Of course, bring enough light sources and backup sources for several hours underground. If you would like to do the full length of the cave, it would be a full 3 mile route which would take up to 4 hours. 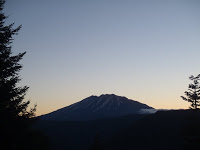 Surface activities are numerous and everyone wants to have a chance to climb Mt. Saint Helens! Permits need to be made in advance with the National Forest Service. These quotas can fill up very quickly in the summer. Expect to be sharing the trail with 100 other people!
#7 Mitchell Caverns, Providence Mountains National Recreation Area, California.
I don't know how you could find out about this place without simply stumbling upon it! I discovered this California gem when I was hiking around Mojave National Preserve. Smack dab in the middle of the preserve is a state park for the Mitchell Caverns and they offer cave tours for $6. Its such a wild part of the Mojave Desert that you will doubtlessly only be sharing the tour with a couple other adventurers. These classic limestone caves sport some incredible formations such as the Queen's Chamber, pictured above. The tour involves a lot of stairs, but nothing technical. 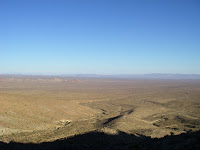 Unfortunately, due to California's recent budget crisis, the recreation area is closed indefinitely. Write your congressmen! Should the park open up soon, I would recommend also hiking around Mojave National Preserve. It is a much less crowded park than Joshua Tree and the hiking possibilities are endless. Of particular interest is the Hole in the Wall Canyon located in the central part of the park. 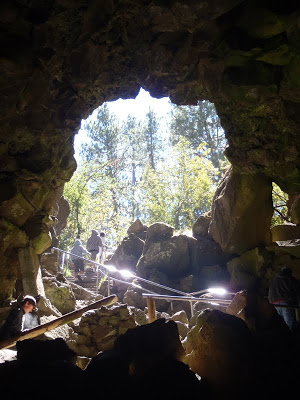 ﻿#8 Lava River Cave, Newberry Volcanic National Monument, Oregon
Lava River Cave is the longest cave in Oregon and a very easily traverse cave. Located near Bend Oregon, this cave is run by the National Forest Service and Newberry Volcanic National Monument. This is a very popular cave because it is not steep or technical and can essentially be walked. Most folks prefer to rent a lanturn from the forest service and do it the old fashioned way. It is roughly 1 mile in length and there is a single entrance- so 2 miles round trip. Unlike some of the other caves I've posted, this is a family-friendly cave that's also nearby to several other great sights near Bend. Here is the National Forest Website. 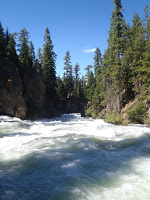 There is simply way too many good things about Bend, Oregon to be contained within one blog. Newberry Volcanic National Monument preserves parts of the Dechutes River and serveral volcanic buttes. Also, nearby are acres and acres of lava beds that invite scrambling and meandering. The crater rim trail follows the rim of an extinct butte and is a short hike with expansive views of the desert. This is located nearby the Lava Lands Visitor Center. I'm sure I will be posting more about Bend in the future!
﻿

I rarely write about places I haven't ben to or explored but I must make a couple of exceptions. It would be simply unfair if I left out Timpanogos Cave National Monument from the list of great western caves! This one is located in central Utah about 45 minutes from Salt Lake City (Directions). The National Park service runs cave tours in the summer and you will be able to see the large formation known as "The Great Heart of Timpanogos", which looks like an enlarged tooth. What you should really do to see this cave is include it as a stop in a bigger road trip around Utah. I've seen every other national park in the state and its perhaps my favorite place to explore!
#10 Carlsbad Caverns National Park, New Mexico
This is another great western caving location I've never visited and hope to see someday soon. I write this as somewhat of a post-script because there's already an abundance of information written about these caves. From speaking with National Park Rangers, they generally rate this park as one of the best in the system which fuels my desire to someday explore this cave! Alas, I can only speculate! Here is the National Park Website.
Well, that just about wraps it up! I hope you are about to see some of the most well preserved caves in the country!
Best Caves in America: Part 1
Read. Plan. Get Out There!

So you don't consider Carlsbad Caverns as a "western cave"?