“I have always said I would not have been President had it not been for my experience in North Dakota.”~ Theodore Roosevelt, American President and Founder of US National Parks Chan﻿ces are, you don’t have North Dakota on your “Top Outdoor Adventure Destinations” list. This is a shame, because I (and many others!) consider North...

"I have always said I would not have been President had it not been for my experience in North Dakota."~ Theodore Roosevelt, American President and Founder of US National Parks 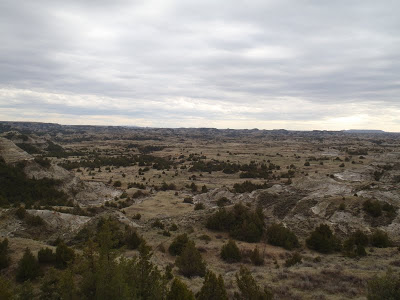 Chan﻿ces are, you don't have North Dakota on your "Top Outdoor Adventure Destinations" list.
This is a shame, because I (and many others!) consider North Dakota to be one of the last true wildernesses in the country. Ever since visiting, I've said that North Dakota has the most wildlife I've ever seen in a single place. Free range Bison, wild horses, elk, deer... its all here! So put this state on the map of destinations. Here are 5 Epic Adventures to be had in North Dakota
#1 Theodore Roosevelt National Park, Medora, North Dakota
Almost all North Dakota Adventures begin at Theodore Roosevelt National Park. This park preserves the badlands of the state and the Little Missouri River. Perhaps the most fascinating thing about this park is the shear amount of wildlife. As soon as you enter you will probably see a bison heard and some of them stand taller than a car. I loved simply sitting on a forgotten butte and watching bision herds roam around. If you go in the spring, you will see the bison and wild horse herds calving! Yes there are hundreds of wild horses which roam these badlands as well! If you're not too into hiking, its okay because the roads will take you by most of the good viewing spots. If you're not from the midwest, you might even get a kick out of seeing acre-sized prairie dog towns! 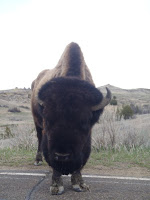 The South Unit is located near Medora, North Dakota and is where most visitors enter. There is a 36 mile loop road which meanders around the Little Missouri River and up into the badlands. Its an excellent drive that takes and hour. Several turnoffs have scenic lookouts and hiking trailheads. However the best hiking in the park in the west side of the River. The Petrified Forest Trail is the best in the park and showcases petrified logs and bizarre rock formations of the park. Getting there can be difficult as the road to it is a rough dirt road. You can also park on the east side of the river and cross the river when levels are low.

The North Unit is even less traveled and is out of Watford City, North Dakota. If you have a full day or two, it is worth it to drive an hour and fifteen minutes to the North Unit. This part isn't necessarily different from the South Unit, but there is even more wildlife. If, for some reason, sharing the park with a couple other people is too much, cruise up to the North Unit and you will essentially be alone! 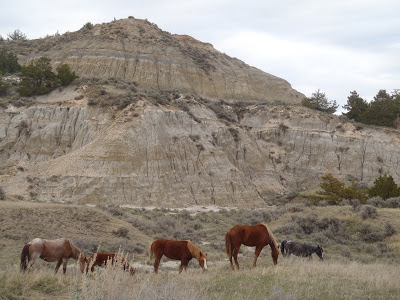 #2 Horseback Ride, Bike, Hike the 96-mile Maah Deeh Hey Trail
This is one of the greatest adventures you can have in the midwest. It has also been ranked as one of America's greatest adventures! The Maah Deeh Hey Trail is a 96 mile trail connecting the North and South Units of Theodore Roosevelt National Park and is three trails in one. As a backpacking trail, its a week to week and a half long trip. It can also be done as a mountain biking trail although you will have to take a different route around the national park. Lastly, it is a horseback riding trail! Regardless of your method of travel, this trail is a challenge and a wilderness adventure. You will seldom see signs of human development as you wander up and down the badlands. Although I've never done this trail myself, I've wanted to return ever since I went to Theodore Roosevelt National Park for the first time. The official website is here.
#3 Hiking White Butte, the Highest Point of North Dakota, Amidon, North Dakota
Highpointers praise this butte as one of the most scenic and most difficult to get to high points in the country. The hike itself is nothing difficult, but you REALLY have to want to be out here! As in, you don't just end up in one of the least populous counties in America. Located in Slope County, North Dakota, White Butte is 3,506ft tall and rises about 500ft above the surrounding plains. Despite is low prominence, I would highly recommend this mountain to highpointers and normal hikers alike. The view from the top is endless as you survey the great bounty that is North Dakota. I felt a real appreciation for the hard work of midwestern farmers who live and work in this harsh, yet beautiful landscape.
Google Map Directions to White Butte, North Dakota
View Larger Map
Directions to White Butte, North Dakota-
From here its a really easy 1 mile hike to the summit. There's a faint trail, but its not too hard to get to the top from any route. Be careful though, there are rattlesnakes and millions of ticks along the route! For some more help, here's my own trip report
#4 Center of North America, Rugby, North Dakota
This is another crazy geographical adventure that is somehow appealing to folks like me! Did you know that the geographic center of North America is in North Dakota? You probably didn't and may not even care, but this is another great adventure of the state! It might seem a little strange, but if you are coming out to North Dakota, you might as well snap a picture with the center monument... just to say you did. I was equally proud of myself for successfully visiting the center of the United States in South Dakota. 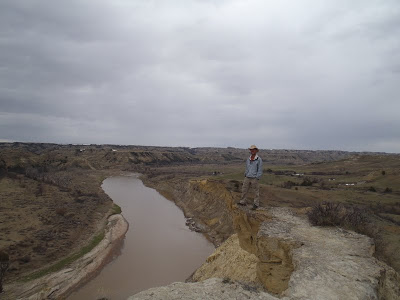 #5 Kayak Little Missouri River, Theodore Roosevelt National Park
This yet another grand adventure near Theodore Roosevelt National Park which offers wilderness serenity. I have to note that I haven't done this adventure...yet! The Little Missouri River flows from extreme Northeastern Wyoming northwards into the Missouri River. This river cuts through the badlands of the state somewhat like the Colorado River runs through the Southwest. Its an important irrigator of many farming communities and wildlife. Kayaking it can be a difficult affair because there is a very small window of opportunity. You want to be hitting this river in the late spring, after all the ice is gone and before the mid-summer when river levels are too low for kayaking. The National Park website gives some great trip-planning tips to paddling the Little Missouri and the rangers will be happy to assist you over the phone.
I hope this has given you a glimpse of all the hiking, paddling, and other outdoor adventures that North Dakota has to offer. If there's one thing I learned about traveling through the Midwest, its that every state has epic adventures to be had.
Read. Plan. Get Out There!