Magnificent Hike of Bond Falls after a Severe Thunderstorm

It had been almost 6 years to the date since I had last visited the Upper Peninsula. A torrent of memories rushed in the moment I crossed the state line. My last visit was during a very iconic time of my life when I was making a great trek from California to Maine to start...

It had been almost 6 years to the date since I had last visited the Upper Peninsula. A torrent of memories rushed in the moment I crossed the state line. My last visit was during a very iconic time of my life when I was making a great trek from California to Maine to start grad school. Camping out on the shores of Lake Superior and hiking to the waterfalls of Pictured Rocks are scenes forever etched in my mind. Last time I had entered by way of Ironwood, this time I came up from the south. 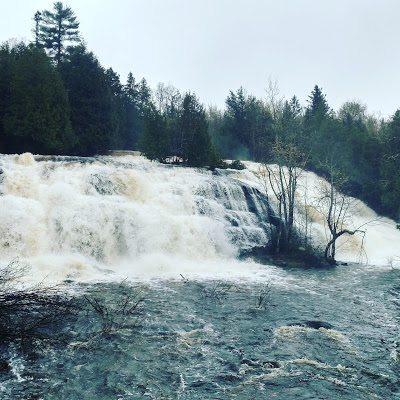 At the end of the summer or after a dry spell, Bond Falls is one of those pristine waterfalls that will certainly end up being a photographer's favorite. Cascading 50 ft down a fairly diagonal slope, the pictures I had seen prior to visiting made it look serene. However I visited the area after an extreme period of thunderstorms and it was far more turbulent! I could hear the roaring sound of the waterfall from the parking lot. Today I would not be getting a wispy, horsetail-like picture. In fact, it felt more like Niagara Falls in the Upper Peninsula.


The trail to the waterfall is neither steep nor difficult.  The scenic area has numerous boardwalk trails to help with exploration.  Bond Falls is encircled by these boardwalk trails below.  A small, partially paved trail ascends the right flank of the falls giving the viewer a chance to see the cascades above.  For a wilderness waterfall, it is remarkably accessible.

I have to admit, I was cautious and a little bit scared ascending the trail to the top of the falls. Normally I don't think that the waterfall runs down the trail itself but today it had covered one of the view points. The sound was deafening and the force was palpable. It almost felt like I was in an earthquake. What power! 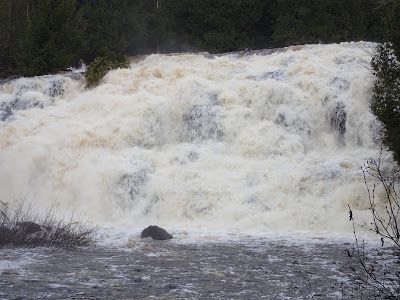 Although Bond Falls is the centerpiece of the park, I did enjoy skirting around the smaller canyons and eddies above the falls.  The river above ran with a terrific temper as well. It's amazing how much can change with a night of severe thunderstorms. If you visit, plan for at least two hours of wandering and pondering.

Close to Bond falls is Agate Falls which I visited later in the same day.