In my most recent adventure to Big Bend Country, I mostly repeated several adventures I have done in past. This included canoeing down Boquillas Canyon, hiking Emory Peak, and walking through Santa Elena Canyon.  I did have the opportunity to explore several areas that I’ve never been to before. One of them was Big Bend... 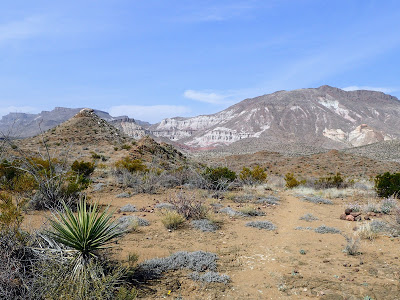 In my most recent adventure to Big Bend Country, I mostly repeated several adventures I have done in past. This included canoeing down Boquillas Canyon, hiking Emory Peak, and walking through Santa Elena Canyon.  I did have the opportunity to explore several areas that I've never been to before. One of them was Big Bend Ranch State Park.
Though only about 20 or 30 miles from Big Bend  National Park, Big Bend Ranch far less accessible to the casual passerby- adding to its elusive charm. Most the roads are unpaved and require high clearance. It is also a major mountain biking destination. In fact, it's achieved one of the greatest awards in the mountain bike world from IMBA - an “Epic Ride”. As I didn't have a mountain bike today, I was satisfied by taking the park by foot. 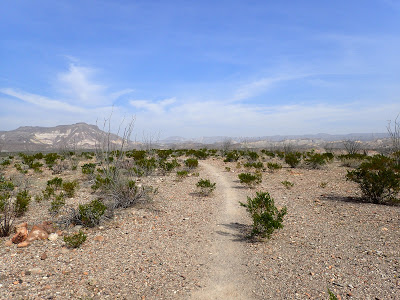 A great hike which is not too far off the beaten path starts at the West Contrabadio Trailhead leading to the Fresno Divide-Dome Loop Trail. I like to this hike because it involved quite a bit of wilderness travel though with fairly minimal effort. At 8 miles and length, it can easily be done in about a half to three-quarters of a day. There are some great vistas with plenty of opportunities for photos of desert life. In the early winter and spring, the blue bonnets are in bloom adding to the allure of the trail.
I happened to hike this trail on a Saturday. In spite of the high season, I ran into no other hikers. It was a windless day and the silence was welcoming. It is at a lower elevation than most of Big Bend Ranch State Park as well as the National Park and so desert life seemed sparse. With no trees nor hills to obscure the view, I admired the unnamed desert mountains in the distance. Ribbons of color created an ethereal look. It felt like traveling across the ocean, where you know you’re moving but without any point of reference, it is hard to say how far. It’s dreamlike. 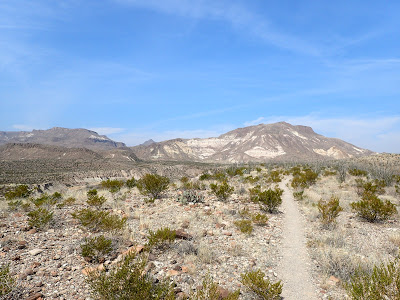 Towards the halfway mark of the hike, the trail does come to a vista with views of the Fresno Divide as well as the valley below. Then it sharply dips into an arroyo with steep walls. It's funny how such a stark landscape can hide elusive canyons such as these. At the heat of the day there was not even a bird nor a bug to break the silence. Quiet contemplation was very natural here.
As it loops back towards the trailhead, the topography remains flat.  I enjoy the arduous Trek to a distant Peak, I also like hike like these where walking is as effortless as breathing.  I was back to the trailhead after only four hours of  deliberately slow hiking.  Perhaps next time I will bring a mountain bike and have a similar experience. 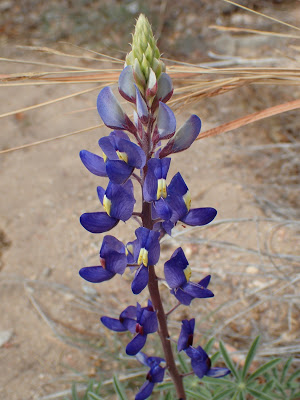 I would highly recommend this hike in the late winter or early spring. I think the Blue Bonnets were just beginning to bloom and would have loved to experience the explosion of color that occurs later in the season.
Big Bend Ranch State ParkDesertHikingRio GrandeTexas