A return to a favorite wilderness Normally I’m not much for repeat adventures. With the opportunities I have to take a week away from work, I’m much more apt to make a headstrong foray into some new wilderness I’ve never been to. But Boquillas Canyon had been such a captivating trip last year that I just...

A return to a favorite wilderness 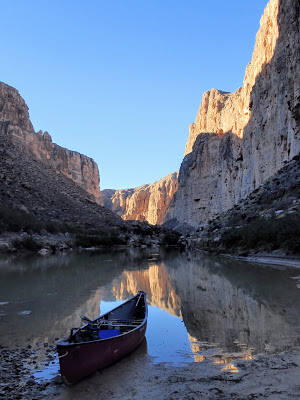 Normally I'm not much for repeat adventures. With the opportunities I have to take a week away from work, I'm much more apt to make a headstrong foray into some new wilderness I've never been to. But Boquillas Canyon had been such a captivating trip last year that I just couldn't stay away. The perfectly sunny and warm West Texas skies were beckoning once again.  Big Bend National Park and the Rio Grand Wild and Scenic River are not exactly unknown to the world though their visitorship pales in comparison to similar national parks. This is likely due to their remoteness- 4 hours from Midland-Odessa, 5 hours from El Paso and about 6 hours from San Antonio. You don't just stumble upon these national parks, you make a destination out of them. Anyone who has been would confirm that its worth the laborious drive!
Map of my adventure down the Rio Grand
Depending on the year, the Rio Grand Wild and Scenic River can be the least visited national park unit in the entire system (including Alaska!). Snaking north of the boundary of the national park, this pristine river has almost no connection with civilization save for a few primitive campsites and some abandoned mining camps. There is absolutely no cell phone reception, no visitor centers and no way out except down the river- that's the draw for me.
With all the talk and politics of the southern border, one might mistake this area as a dangerous place. Nothing could be further from the truth. In this vast, unpopulated corner of North America, the border is as insignificant as a line on a board game. There are no walls, no signs and nothing other than a river that divides the two countries. Livestock, feral horses and bears frequently hop back and forth across the border when the river runs low. As the international boundary is technically only at the deepest point in the river, the paddler floats back and forth across the boundary as well.
Without a doubt, Boquillas Canyon is a Grand Canyon. Its about 20 miles in length and anywhere from 800 to several thousand feet deep. Unlike the grand canyon, there are no official hiking trails from the rim to the river. A few primitive herd paths exist though they are difficult to get to, involving at least a 14 mile round trip from the nearest road. In both my trips down the canyon, I saw no people for 3 days.
The most traditional way of canoeing Boquillas Canyon is putting in at Rio Grand Village and taking out at Heath Canyon. This is a 33 mile trip that is typically done in 3-4 days depending on the comfort of the paddlers. There are two rapids that range anywhere from class 2-3 and numerous other smaller ripples that still require a little skill to navigate. The water levels of the river entirely depend upon the Rio Conchos, a major tributary entirely in Mexico. Irrigation and dams have made the river more of a creek North of Presido, Texas-Ojinaga, Mexico. Though the Rio Conchos is also extensively developed, it releases far more water. March is considered the high season for paddling though many wilderness seekers try to avoid the spring break season when the swell of tourists creates a veritable metropolis. January and February can result in lower water and lining the river at times though I did not find this oppressive.
It was funny how similarly this trip was to my former adventure. I camped at the same sites and made about the same progress. In spite of the repetition, I was no less enthralled. I could go on and on about the scenery though that's obvious. The parts that aren't communicated in pictures are the silence and serenity of being totally alone along a desert river. Ripples broke the silence occasionally though it was hauntingly quiet for the most part. At several sections, I simply landed on a sandy spit and allowed myself to be enveloped by the tranquility. 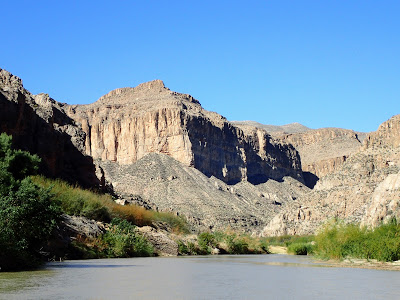 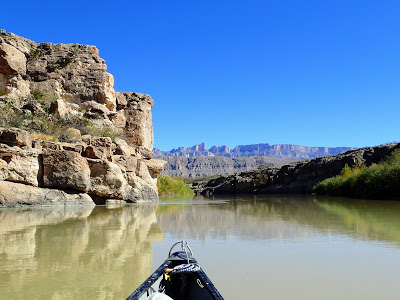 At night, I simply relaxed by a campfire and gazed up at the trillions of stars. There are few places I've traveled that have a clearer night sky. Being 4-5 hours from anything considered a city sure has its advantages. The Milky Way was like a big silver ribbon crossing the sky and it seemed like constellations I've never seen were etched with perfect visibility. The canyon walls themselves looked like jaws though I didn't feel enclosed. Shadows and dim evening light did create an ethereal sight- 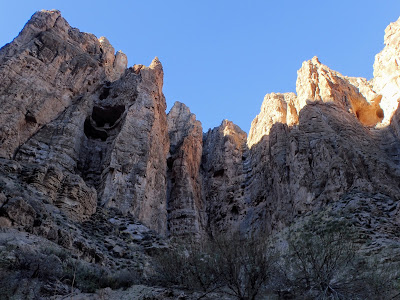 Time seemed to ebb and flow with as much variability as the river itself. There were really only two important events in the day- sunrise and sunset. In my world as a healthcare provider, time is far more regimented and counted. How pleasant it was to have a far more indefinite way to pass the day. 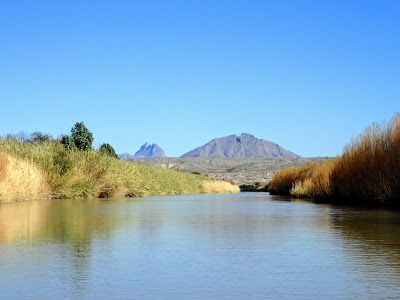 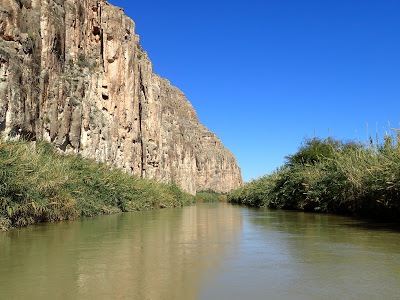 Though I'm sure I would have loved to spend weeks going up and down the river, it had to end eventually. The finish of Boquillas Canyon is fairly anticlimactic. After leaving the walls behind, the landscape becomes flat though not uninteresting. It offers some panoramas of distant desert mountains and the river teams with noisy life. Note that campsites are few once leaving the boundary of the National Park and both sides of the river are privately owned. Thankfully there are a few large islands in the river that offer respite.
Finishing near the abandoned mining town of La Linda, the takeout is at the end of a paved road. A bridge marks the end though this boarder crossing has been closed for 20 years. It almost looks like the infamous "Bridge of No Return" between South and North Korea. Its a ghostly site though without any sort of danger. 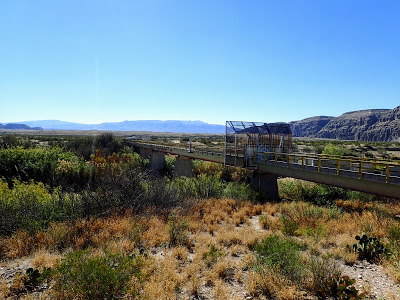 So once again I had an unceremonious end to another grand adventure. My driver picked me up right on time and I was back to Big Bend for some more land-based adventures. I'm sure I'll make a habit out of returning to this river!

Enjoyed your talk. Done boquillas 4 times. Last trip went down mine shaft on mex side. This next spring hope to spend the final night in the gutted mission outside la linda on mex side. Have to get a new driver, as Fred passed.

Sure was a fantastic trip! Sorry to hear about Fred, I’ve been using the same driver for several trips as well. Hope to some day do the lower canyons of the Rio Grand! Have you done it through Dryden?

Fantastic review. Thanks for sharing this. I’m interested in doing this trip in the Spring. Do you happen to have the contact info of the person who can shuttle me from La Linda (Heath Ranch) to the put in? Is there a new caretaker since Fred has passed?

I used Desert Sports in Terlingua – their phone number is (888) 989-6900. They’re generally pretty good, can’t remember the name of the guy who did my shuttle both times but he was excellent. I don’t know of the name of the new caretaker- sad to hear that Fred passed!

Fantastic review—was looking for something exactly like this. So I’ve done the Pecos in the Summer before and although yes it’s hot I couldn’t complain because the water was enough to cool me down. However looking to take a friend to Boquillos (it will be both of our first time) and they’re more concerned about the heat. I tried to reassure them but curious your thoughts and wondered how much on & off shade you could expect to catch from the canyon walls during the day. Also, planned to take some water for initial start of trip but to just purify for the most part—how would you say the water is?

When I did the canyon, there was plenty of shade and it was pretty cool but of course that was in January. The river guides recommend bringing all the water you need for the trip rather than purifying. The river is very silty/muddy so if you purify it, you have to let it settle over a few hours. Bringing the extra water was actually nice though; gave extra weight to the canoe and made for easier travel. Hope that helps! Let me know if you have other questions! -Quincy

I am 42 years old and have floated all sections of the river around Big Bend multiple times, starting around the 3rd grade. I do not recommend floating any of it during the summer months. Temps are the river reach 110 easy and with very little water. November thru March are the best times.

Would it be possible to float this in a whitewater raft or is it to shallow/windy? Thinking of floating this stretch with my girlfriend in December.

I think it would be possible? I would definitely check with the park and a few of the local outfitters in Terlingua first. At low water Boquillas Canyon channelizes. There might be a lot of lining too. But if you don’t mind such things I think it would be worth it.

Hi there! Thanks for the cool write up! I am trying to find places to take out for a shorter day trip, do you know of any along this route? Thanks!

Hi there, I’m looking to kayak the entire Rio Grande thru Big Bend. I want to do the trip with my son and make it a month to two month long trip so we can stop any time for photo opportunities. I’m a photographer and I’m teaching my son the hobby as well.
I’m trying to find someone who has done this before and has a great knowledge of the area to be our guide for this trip. I’ll provide kayaks, food, shelter, etc for my son and I. We just need a guide. Thank you all!

We’re going to kayak this trip next month, as long as we have the required equipment, we can camp anywhere along the US side of the banks of the Rio?

What was the class 2-3 rapid like when you went through? Ok in an open boat? Or is it possible to portage? I’ll be there in late February 2022.

The class 2-3 part is totally do-able I think. Easily portaged or lined if need-be though. I think if the river’s running low you’d have to line it. Hope that helps! -Quincy

I am a visual person and I love your map.
I am organizing a 3 days paddling trip to Boquillas end of Feb. I would like to know where we can camp. It is 33 miles for 3 days On the third day, we need 2 hours shuttle back to Rio Grande Village and set up tents at the campground. So we want a short day on the third.

I know you have layout the possible campsites in your map. Can you give me more details about them?
The Stillwell is private property. Will we get into trouble if we camp there?