Lessons From Our First Time Abroad in Madrid, Spain (And Europe)

First Time Traveling Abroad! For somebody who considers themselves such an experienced traveler, It wasn’t until my late twenties that I actually went abroad for the first time. Like many Americans, I’ve spent a lot of time in Mexico and Canada which are underrated international travel destinations in themselves. However most “real travelers” would say... 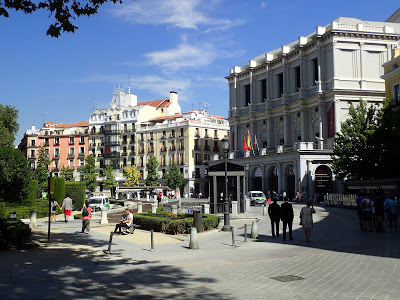 For somebody who considers themselves such an experienced traveler, It wasn't until my late twenties that I actually went abroad for the first time. Like many Americans, I’ve spent a lot of time in Mexico and Canada which are underrated international travel destinations in themselves. However most “real travelers” would say you have to get off the continent across an ocean to really experience international travel. I've been to all 50 states in the United States, so I think of myself adept. But I was actually quite intimidated at the thought of going to Europe. There are many variables that I have not faced that are integral to international travel. So going to Spain would be a grand adventure though one with a steep learning curve.  I'd like to share some of the victories and lessons that I learned with my first time abroad.

Where do I start? Why don't we talk about what I was looking forward to the most. There’s the usual standbys-  food, dance, culture, museums, new environments, ect. However, one of the odd things that really excited me on this trip was the knowledge that every inch traveled would bring me further East than I've ever been in my life. Also, growing up in California, I'm far from used to being around entire cities and landscapes that are 500 to thousands of years old. The civilization in North America dates back far beyond what we normally consider, though preservation has never been a priority like it is in Europe. Timelessness is a foreign concept to most of us Americans.

What I was most nervous about was the language barrier and the knowledge that I'm really the outsider.  Even with the most intensely local-centric places I've been in the United States I felt like I had a knack for blending in with the background and hence getting a very genuine experience. That would simply be impossible for me to do in Spain and I knew that going into it. What would surprise me was how welcoming the people and culture are to travelers. 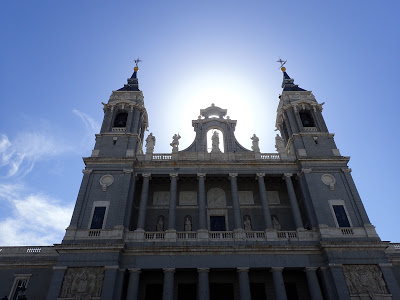 My partner in crime

Traveling with my spouse, Dee, is also an adventure in itself.  We have such starkly different preferences and travel. Dee  appreciates culture history art and relaxation. her trips tend to be carefully planned and executed with precision. I, on the other hand, appreciate nature remoteness, and experiences that may not go up and guidebooks. Hence, I tend to be more capricious and impulsive, ready to take something new on at the drop of a hat. Buying the two preferences ends up being unique as well as challenging.

Despite being intensely jet-lagged and sleep deprived once we got in the taxi and rode through downtown Madrid,  all of that didn't matter. I wonder if this is a  Collective experience of Americans abroad-  to be totally enthralled By architecture that is as ancient as it is enduring. The streets were so narrow, I assume because they were not originally meant for cars. people raised by on Vespas and bikes creating a bustling but not overcrowded feel. I could not stop taking pictures.

Dee was the one that chose our hotel in Madrid  which was just to her liking. She chose Hotel Catalonia Atocha. What a perfect choice that was! It was very elegant and modern though set in a neighborhood that seemed like a time capsule from another era.  We were very happy with  our posh 7th floor room right next to the terrace and bar that overlooks the city. We had a lot to see in our 4 days in Madrid so I would have been just as content to spend them in the hotel. 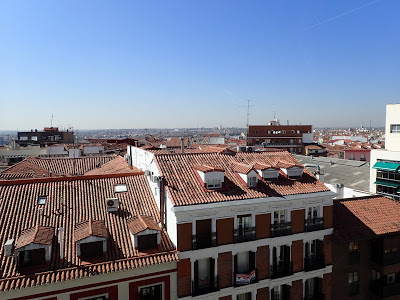 Madrid was a perfect place for me to get my first experience of Europe. Though it is difficult to fully navigate the city and sights without a basic understanding of Spanish, we stumbled our way around and had fun doing it. One of the first things we discovered was the Mercado de San Miguel. Naturally, everyone who comes to Spain wants to experience tapas. Perhaps this market is a good place to start where all the staples of the Spanish diet can be sampled at once. It gave us an excellent feel for what to expect later in our journey.

Plaza Mayor needs no introduction from me but I will say that it was worth paying a visit as well. There were dozens of tapas restaurants that lined this historic city center which we wished we could have eaten at every one. Puerta del Sol is equally well known though no less magnificent. Shopping abounds in this busier plaza. 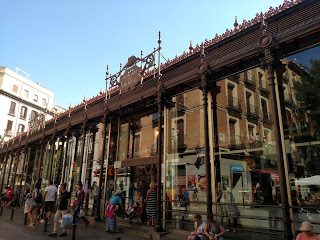 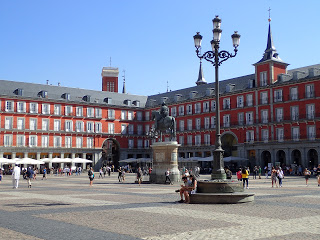 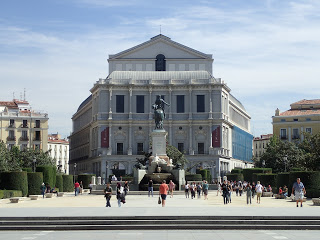 Careless wandering continued to fill us with wonder. Naturally the Catedral de la Almudena (national cathedral) and the Royal Palace were glorious sights. Ancient royalty is another new concept we were immersed in around this part of Madrid. I would say the royal gardens or Jardines De Sabatini were actually the highlights of this part.

With respect to food, we had some excellent experiences though the most noteworthy were- 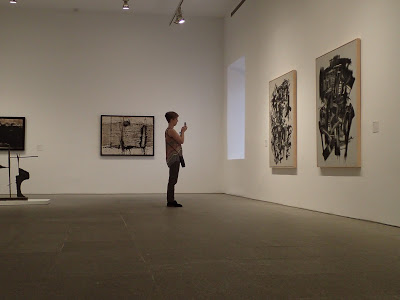 Dee appreciated the Museo Nacional Centro de Arte Reina Sofía which is the modern art museum of Spain. This museum is analagous to MOMA in New York in stature and collections. Every appetite for modern art could be satiated here, from the unusual to the absurd. Dee was in heaven. Guernica is the most famous painting of the museum though it is littered with other instantly recognizable works of Picasso and Salvador Dalí.

Honestly, it was a bit of an intriguing risk to travel abroad. This isn't due to any safety risks- after all, any place in Spain is safer than every place in Chicago. However there was risk that our lack of understanding of language and culture would lead to some embarrassing faux pas. Additionally, we're just not as familiar with how time and travel work in far away places and intangibles such as these can lead us to a great expense of mental energy. As it turns out, there were times when that happened such as when we wandered into an extra-local bar and we felt the coldness of the crowd. However these experiences were few and far between. On the contrary, most places in Madrid were genuinely hospital and eager to share their love for the city to we humble Chicagoians. I'm glad we picked Madrid as our first destination abroad.