Winston Tunnel in Northwestern Illinois is a rail-turned-hiking trail that has some resemblence to the more famous “Tunnel of Love” in Ukraine.  Nature quickly reclaimed these abandoned railroad tracks Galena easily makes the list of the most beautiful places in Illinois and the Midwest. We’ve always been drawn to its rural charm and classic downtown....

Winston Tunnel in Northwestern Illinois is a rail-turned-hiking trail that has some resemblence to the more famous "Tunnel of Love" in Ukraine.
Galena easily makes the list of the most beautiful places in Illinois and the Midwest. We've always been drawn to its rural charm and classic downtown. In our last few trips, we've been exploring the nearby hiking areas. The Northwestern fin of Illinois lies in the "Driftless Area", a land of rugged hills and valleys that starkly contrast the way most people think of the Midwest. Additionally, the banks of the Mississippi River are flanked by towering bluffs that create the illusion of mountains. Not surprisingly, I find myself touring through this beautiful area several times a year.

Online pictures of Winston Tunnel had captivated me over time. The overgrown brush which has overtaken these abandoned rail line has an ethereal allure. Again, it looks a lot like the famous "Tunnel of Love" in Ukraine though there aren't nearly as many people out this way. It is a hike to get to the Winston Tunnel and I would say that it is neither well marked nor known. Here's a rough idea of the area and hike-


Again, while it may look clearer on a map with satellite view, there are no signs nor trail markers other than what is at the trailhead. It was longer than we anticipated- we took about 1.5 hours to hike it in total (somebody told us it was 15-20 minutes!). Note that the eastern entrance is not publicly accessible. Also note that the tunnel itself is off limits and barricaded. Nevertheless, the hike to the western entrance is magnificent.

This part of Illinois feels more like a jungle than a prairie. Pines and ferns flourish abundantly and the noise of the forest is deafening in the early summer. Not surprisingly, this area is also popular with hunters in the late fall/early winter.

As you can see from the map, the trail doesn't take a very direct route and its mostly either mowed grass or a herd path along the way. About half way through the hike, you drop right on to the old train tracks and head due east to the tunnel. Along the way, we took extensive pictures- 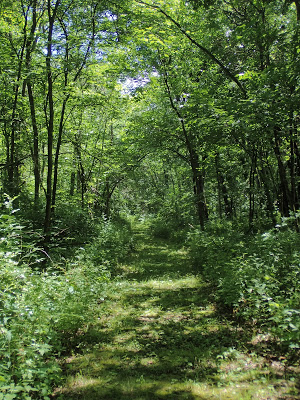 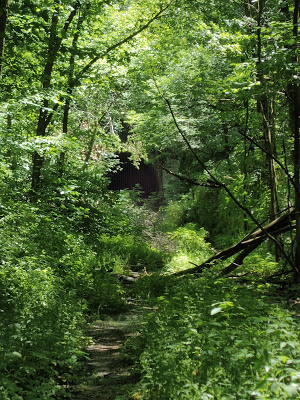 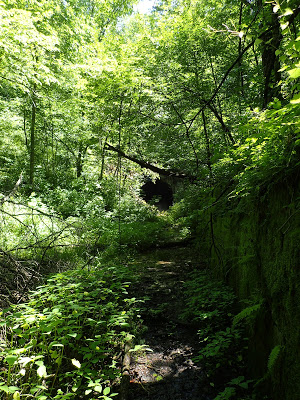 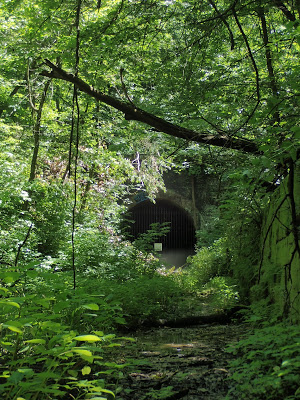 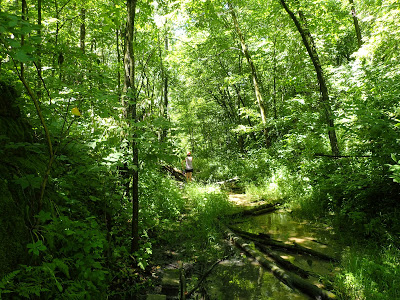 While the tunnel itself has been walled off for years now, the entrance and walk along the tracks is marvelous. We encountered no other visitors on our entire trip and enjoyed the solitude of the woods. Perhaps we could have hiked it faster if we weren't constantly taking pictures!