Just a few miles north of the international boundary in Southeastern Arizona is the surprisingly tall peak of Mt Miller. Rising well above the appropriately named town of Sierra Vista, it is a great all day hike. Near 9,000′ and the turnoff for the summit Miller Peak is a rarely hiked gem in southwestern Arizona...

Just a few miles north of the international boundary in Southeastern Arizona is the surprisingly tall peak of Mt Miller. Rising well above the appropriately named town of Sierra Vista, it is a great all day hike.

Miller Peak is a rarely hiked gem in southwestern Arizona that's frequently overlooked for the summits closer to Phoenix and Tuscon. At well over 9,000ft, this sky island has the characteristic ribbons of desert transitioning to pine forests as one ascends up the imposing ridge-line. It is 4 miles north of the international boundary. The total hiking distance is 10 miles as an out and back hike from Motezuma Pass.

I hiked this one to get out of the desert heat and was rewarded with temperatures in the 60s and outstanding views of the sky island environment. The nearby Coronado National Memorial serves as an excellent place for hiking and exploring as you make your way up to Motezuma pass. There's actually cave nearby that can be easily explored.


The drive up to Montezuma Pass is paved up until the final 2.5 miles. From there it is a graded dirt road that is relatively maintained and I did not have too much difficulty with ascending it in a rental car. There was a mobile command post for Border Patrol at the pass though they did not trouble me in the slightest. Throughout the 2000s, undocumented crossings of the border at this point were quite common and a well know sighting on the hike. Border crossings are less frequent these days, probably more due to the changing sociopolitical landscape of North America. Nonetheless, Border Patrol may ask you to prove your citizenship (a license or passport will do). I was unperturbed either by the patrol or border crossers on this hike. 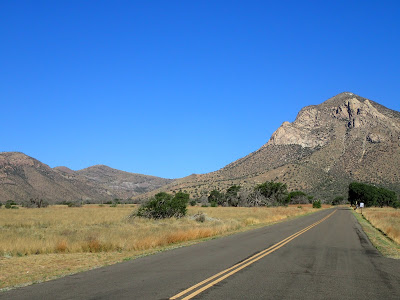 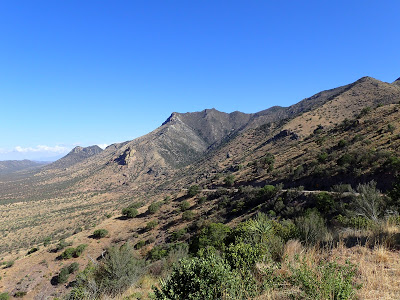 Savannahs and stubby trees dominate the initial ascent up Mt Miller. The views are absolutely phenomenal. Other than the view of Sierra Vista, to the east, there is very little to suggest any civilization. I encountered no other hikers on the ascent though a number of species of birds. I love the way a sky island hike exposes you to essentially several hundred miles of latitude as a consequence of elevation gain. Hence, species varied considerably as I ascended higher. Various patches of cactus blooms added further splashes of color to the Savannah. 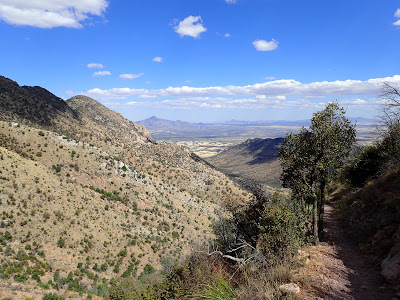 Roughly 1 mile and perhaps close to 900 ft of elevation gain had passed before I entered into the official wilderness of the hike. A solitary sign noted the boundary though the entire area is engulfed in a de-facto wilderness. However the environment did noticeably change to thicker woodlands at the boundary.

From here the trail follows a narrow ridgeline almost entirely to the summit trail. Great gulfs exist on both side of the trail and I was able to have the rare view of the shoulder side of circling birds of prey. Obviously they were on the hunt though their effortless wafting upon unseen thermals made it look like they were just out for pleasure. 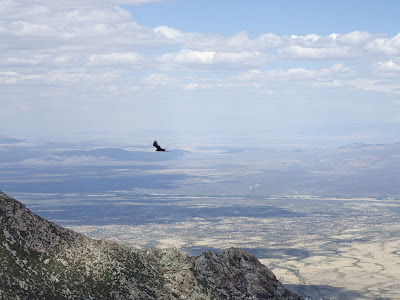 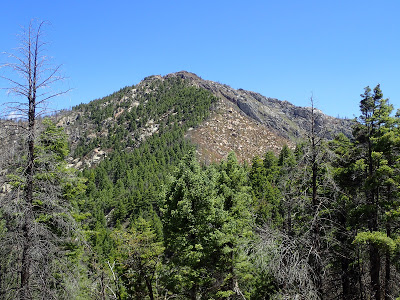 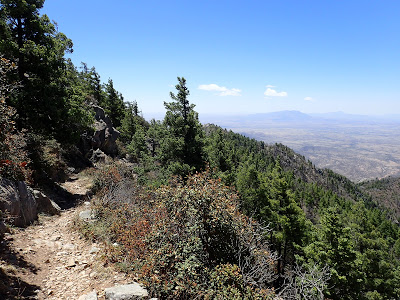 Thicker evergreen forests permeate the upper reaches of the summit trail. Lush and teeming with life, it seemed the cooler temperatures meant that animals could stay in the sun for a longer period of time. Normally the mid-morning and afternoon are the times when life is at a standstill in the desert though in the sky islands this was still a time for wildlife viewing. Evidence of whitetails and bears was everywhere though I only caught fleeing glances of a few bounding deer. The birds were numerous though, adding to the tranquility of the hike.

The Arizona Trail continues past the summit and the tip-top itself is just a 0.5 mile jog east. Several fires seemed to have troubled the area over the last few decades and though the hollowed out remains of the forest have a haunted look to them, the views open up expansively. The pinnacle itself was entirely denuded. 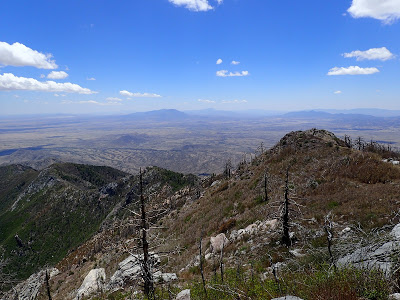 Nearly every major summit of Southeastern Arizona was plainly visible at the top. Cotton candy clouds provided a respite from the sun as I spent a full hour taking pictures and enjoying the cool mountain air. The register was signed by people all over the country though this time of year is signed only once or twice per week. I couldn’t see why more didn’t enjoy this hike though I was content to spend some time alone. 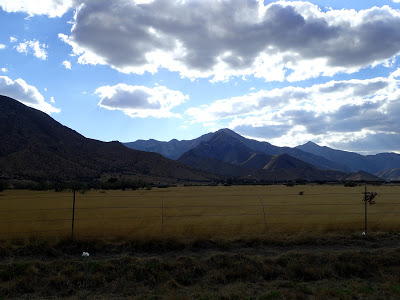 The way down is the same as the way up though the pleasure of the descent matched that of the earlier part of the day. Sunset colors are brilliantly accentuated from this high above the desert. I’m sure the stars are just as good. Back at Montezuma Pass, I clocked my hike as a little over 7 hours and a comfortable 2 mile an hour moving pace (with lots of picture stops!).

I spent the night in Bisbee, which was about 40 minutes away. This odd town is the Southwest's answer to Berkeley or  Austin. This eccentric hamlet attracts all kinds of colorful characters, not the least of them being myself.