Some unforeseen but welcome aspects of mid-twenties life in Chicago. Home It was a bit of a culture shock to move from Southern Maine to downtown Chicago. Just about everything other than the weather is different. I confess I had more fears than anything moving to the largest city in the Midwest.  Maine had been a place...


Some unforeseen but welcome aspects of mid-twenties life in Chicago.
It was a bit of a culture shock to move from Southern Maine to downtown Chicago. Just about everything other than the weather is different. I confess I had more fears than anything moving to the largest city in the Midwest.

Maine had been a place of wonder and discovery for this California-raised traveler. The three years I spent living and getting educated in northern New England were punctuated by adventures in the Appalachians and glorious trips along the Maine coast. It was clear I would not have those experiences in Chicago and that worried me.

Fifteen months later, I still miss much about the northeast but I've also come to love this Midwestern metropolis in ways I never anticipated. 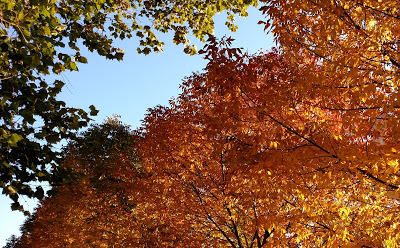 The South Side is a nice place

I don't think there's a more poorly understood place in Chicago than the South Side. Often this part of Chicago ends up as a pawn in somebody's strictly-demarcated political rhetoric on major social issues. Even born and bred Chicagoans can fail to see its intricate diversity, history and national relevance in so many ways beyond violent headliners.

To be fully honest, I had no thoughts beyond what I read about online prior to living in Chicago. But I've had the great opportunity of working at several hospitals and clinics across the spectrum of communities in the South Side/South Suburbs: Beverly, South Shore, Back of the Yards, Marquette Park/Chicago Lawn, Hazel Crest. I'm far from ever fully understanding all the dynamics and elaborateness of its communities. Nevertheless, it has added to my evolving love for the city.

I've found it difficult to describe my time on the South Side. Typically it comes off as the words of an ignorant out-of-towner trying to neatly explain something he clearly doesn't grasp. If I spent another decade here, I still wouldn't measure up to the knowledge of those who are generations deep in Chicago. Yet I've generally found it to be welcoming, open and surprisingly safe... certainly not fitting of the detestable nickname of Chiraq.

After a few weeks of working here, I was forgetting to lock my car doors (just like I did in Maine). I met a lot more pastors than I did gangsters. I started buying Swiss Chard grown in Englewood and Palestinian delicacies at the farmer's market on California ave. I marveled at the fall colors on 63rd st. I got involved with the local free clinics and learned about the extensive amount of work put in by faith communities to create sustainable and pragmatic solutions to the social ills that do plague the city. In summary, I met a lot of good people who make the South Side a nice place. 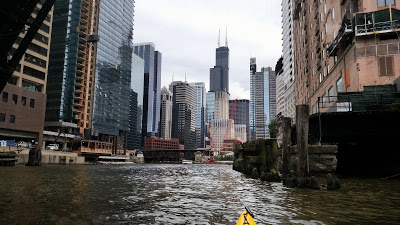 Though certainly not an excursion through daring wilderness, floating down the Chicago River in a kayak is an adventure. I store my touring kayak with Kayak Chicago which allows me to take it out whenever I get the notion during the warm months. I've taken my boat out at various times down the river and paddled under the shadow of skyscrapers which form this deep urban canyon. Its like having my own little architecture tour and it offers a unique workout when I'm looking to mix up my routine. My favorite trip has always been the night trips to watch fireworks at Navy Pier. There's a certain magic with watching a glimmering skyline sunset followed by the dazzling shimmer of the fireworks and city lights.
The ease of using public transportation and walking

To this traveler who sent most of his adult life in the public transportation-less Southern California, the CTA is actually quite novel.  We walk or take public transit everywhere. Having it all in walking distance keeps us health too (and allows us to go out more often!). My fiancée and most my friends simply have no need or want of a car. This makes downtown living substantially more affordable. In fact, when Dee moved here from a cramped apartment in Westwood, California, all she could gush about was how cheap it was to live in Chicago. I suppose all the gas money, insurance, maintenance and upkeep really add up.
600 square feet is perfect size for an apartment

I live in a fairly small place even by downtown standards. Its called a convertible which one step up from a studio but not quite a one bedroom. I anticipated that this would be positively suffocating. But a well designed convertible apartment can feel like a much larger place. My one bedroom, 1,000 sq ft. apartment in Maine felt cramped sometimes. Yet I've never felt that way here. I think its a combination of urban-sizing all my home furnishings, having a great skyline view and of course, the multitude of opportunities for culture and nightlife. In a way, having a smaller place makes sure that I spend more time outside of it. Between work, fitness and going out, we are hardly here and awake for more than a few hours at a time. Its even kind of cozy on those blizzardy February days where we prefer to drink hot chocolate and watch Netflix reruns.
Everybody has a reason to be here at some point

We millennials are a mobile bunch. Hardly any of us stays in their hometown for long. I don't think either of us ever had Chicago on our thought du jour back in undergrad days. However we were both drawn to the city for opportunity that was not found elsewhere. Turns out a lot of our kind have been drawn here too. We've serindipitously had hometown friends and college classmates end up living in the same building. Beyond that, there's enough global commerce, national conventions and tourism destinations to bring other long lost friends this way. It seems like at least once or twice a month I find myself catching up with an old friend over coffee or dinner because they just happened to be in Chicago.
O'hare makes the entire world accessible

I'm a little embarrassed to say that for all the traveling I've done, little of it has been international. But you could get to anywhere in the world from O'hare without even changing flights. This makes travel cheaper and easier. The airport is as easy to get to as walking a few blocks down to the blue line and taking it to the last stop. Its a comforting thought to know how easy it is to go international without too much cost or trouble.
The Lakeshore Trail

Though not exactly a secret, I didn't think I would do much on the Lakeshore Trail due its fame and congestion during busy weekends. Actually, its not that busy at all for most of the year. It an uninterrupted 18 miles of running/biking trails which are a good respite for when I feel too cooped up by urban living. Small nature preserves permeate the length of the trail as well as the massive Jackson and Lincoln Parks. At the very northern terminus of the trail is Edgewater Beach a.k.a. Kathy Osterman Beach a.k.a. Hollywood Beach which is hidden away from the crowds and often as blue as the ocean (well kept secret for most of us). I haven't gotten tired of this trail even after running it a few times a week all year.

There's a lot I miss about New England. I think it was more difficult during the first 3-6 months of moving to the Midwest. But my love for Chicago grows with time. Its an acquired taste but there's a lot of reason why people love living here, this millennial included.