Vose Spur, Peak Above the Nubble and Scar Ridge are 3 bushwhacks of varying difficulties that usually end up at the final 90-100 summits of New England's 100 Highest. I hiked these over the course of three days in my final week here in New England.﻿﻿﻿﻿
﻿﻿﻿﻿


I had just a week left in New England before I hit the road for new life in Chicago. However I still needed to finish New England 100 Highest- just 5 summits away. Due to an unfortunately timed flat tire, I was unable to do Snow Cupsuptic while hiking the other "Rangeley 6 Pack" summits. Nevertheless, I wanted to either finish or come darn close to finishing the entire list. These three bushwhacks in New Hampshire along with "Snow Cup" are the tough ones left. I'd like to ceremoniously finish on Mt Carrigain which is known as one of the most beautiful wilderness summits in the range. I'm grouping all these together as they were #96, #97 and #98 for me.

View Vose Spur, Peak Above the Nubble and Scar Ridge Bushwhacks in a larger map

Starting with Vose Spur, I thought I would be clearing the hardest hurdle first. I was wrong- Vose Spur is actually quite tame compared to other bushwhacks in the region and on the 100 highest list. Most, but not all, of the path is well established and easy to follow. Although steep and somewhat of a haul, it was more enjoyable than I expected.

The beginning of the hike is easy enough- about 3.2 miles of essentially flat walking to the turn off boulder. There's a very conspicuous boulder which marks the route up Vose Spur. It is in a wet part of the trail that is crossed by a few flat rocks. The boulder is about half the size of a car.

Actually, to be honest, I didn't find any obvious route from this boulder. I eventually just bushwhacked up to the prominent spur running southeast from the summit. Once you reach this spur, it is a steep but straightforward 'whack to the summit with only minimal amounts of brush. I was surprised at how easy it was. I did come out on the talus field which you can see in the satellite view. This was useful in gaining elevation and held the only real view of the summit.

The summit canister itself is still present as of August 2014 and there's actually a chair up there (?). Don't know who had the moxie to get all the way up here and leave a chair... but it is there. I didn't have to search too much to find the summit. Back down wasn't too difficult either except for the final portion just below bushwhack boulder which is quite scrubby. Ironic that the most difficult part of the hike is the first section which hardly gains much elevation.
﻿
﻿

Notes on "Peak Above the Nubble" (Unnamed Peak)

Peak Above the Nubble, as it is so called, is a feature of the taller Twin Range in the northern reaches of the Pemi. The peak is unnamed but makes its way on the list due to its elevation and just barely enough prominence.

On the "illegal trail"- Many a peakbagger has been smitten by the fact that the "illegal trail" which approaches the summit from the northwest cannot count towards your official 100 highest tally. I believe the reasoning is included in the actual application. Regardless, it makes this hike pretty much a bushwhack although the illegal trail is impossible to avoid once you hit the summit.

I started on the road which leads down to the Twin and Garfield approach outside of the town of Twin Mountains, New Hampshire. I've marked the start on the map above. There are three large boulders which block further travel on an old logging road which serves as the start. I went down the logging road less than half a mile before turning into the woods and essentially heading directly up to the false summit just 250 shorter than the actual summit. As you can see from the map, the large green spot is an area of new growth timber which is heinously thick. I avoided it on the trip back but plunged though the center on my way up. Other than this, it is an open wood walk to the false summit.

From the false summit, it is your call as to whether you want to use the "illegal trail" directly to the peak. I would suspect that most use the trail at this point. I make it almost to the summit without using the trail, but at some point it becomes impossible.

The summit has excellent views. It is one of the rare summits on the NEHH with a genuine and desirable view. Total time up and down was about 1/2 a day for me. It took less time than Vose Spur. 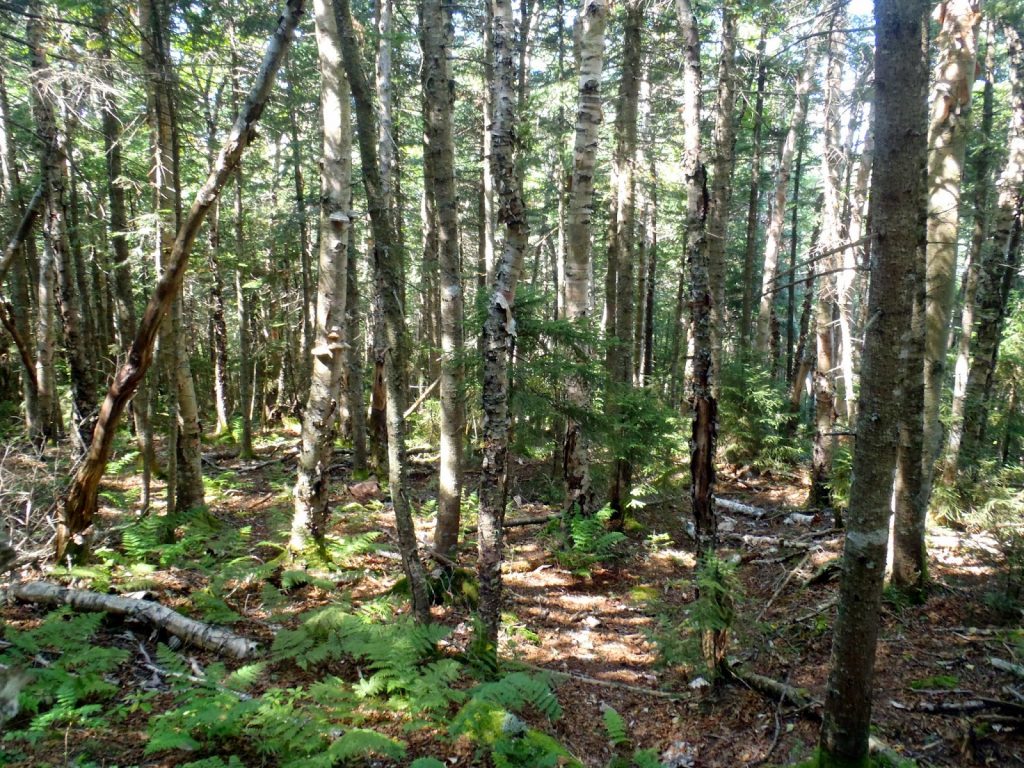 Scar Ridge is another hike which scares many and most feel silly about that after hiking it. Scar ridge didn't come without any difficulty but it wasn't an easy hike either. The fact that you can make most of the trip up the ski resort helps but some people refuse to do this adding significant time and effort to the trip. As for me, I was on very limited time so I did the old ski resort hike.

Getting to the summit of Loon Mountain is quite easy- just a steep road walk. Once at the highest point where the quad would drop off skiers, start heading down the ski trail to the right. There's a ski boundary sign which marks the bushwhack start. Actually, the start isn't too bad at all- there's a very well cut trail that leads to the saddle between Loon Mountain and Scar Ridge. If you continue, I imagine it leads to Black Mountain and probably some illegally cut ski trails. However from the saddle, there are perhaps dozens of herd paths which can be taken. For the most part, I was able to pick my way up though a few herd paths on both directions. A couple of the paths were quite legitimate while others were obviously used more frequently by moose. As I found with Vose Spur, the first part was the most difficult- after that the herd paths somewhat converge and the route becomes apparent. I made it to the summit without too many cuts and scrapes.