I rarely write about adventures that just involve driving and sightseeing but I must make an exception for this trip. Driving Route 132 from Sainte-Anne-des-Monts to Forillon National Park took me right along the cliffy coast of the Gaspé Peninsula’s north shore. Mont Saint-Pierre Previous: Hiking Mt Jacques-Cartier, Quebec.  I’ve known since well before this trip...

I rarely write about adventures that just involve driving and sightseeing but I must make an exception for this trip. Driving Route 132 from Sainte-Anne-des-Monts to Forillon National Park took me right along the cliffy coast of the Gaspé Peninsula's north shore.
Previous: Hiking Mt Jacques-Cartier, Quebec.

I've known since well before this trip that this trip was going to be too short for seeing everything I would like to see. This became apparent as I sped along the north shore of the Gaspé Peninsula on my way to Forillon National Park. I had enjoyed my two days spent hiking in Parc De la Gaspesie but this cut my time short for seeing the rest of the peninsula. I've discovered that this whole region surrounding the St Lawrence seaway has been called "Quebec Maritime" and has many similarities to the other Canadian Maritimes. Both alpine and coastal, the region appeals to people like me who like to visit places abundant with natural beauty and friendly people

Many Québécois and Americans have enjoyed the scenic drive around the peninsula but the most dramatic portion is the northernmost drive. The road barely keeps itself above the water as it cuts through cliffs and fjords. With every bend and turn, a new valley and small town come into view and I was constantly stopping to admire the view. In a funny sort of way, it reminded me of the drive along California's central and northern coasts where the cliffs run right into the sea. While the area has a distinct maritime feel to it, there aren't very many ports or areas of major commerce. So I believe it was mostly beach houses and summer retreats. Its strange to think of having a beach house at latitudes this far north, but then again, who wouldn't want to have a beach house overlooking the Atlantic Ocean and one of the busiest seaways on the continent?
Although there were hardly any other cars on the road and only a few small villages, the ocean was an entirely different story. If I looked south, I would see the rural valleys and mountains of Quebec. If I looked north, I was essentially looking at an oceanic superhighway. The Saint Lawrence seaway is every bit as busy as a Los Angeles freeway. Two countries and dozens of metropolises depend on the river, seaway and estuary for commerce and travel. The breadbaskets of the United States and Canada were being shipped through this area. Cruise ships and pleasure boats abounded as well. Funny to think that given the means, I could have traveled from this very place all the way to Chicago without ever setting foot on land. 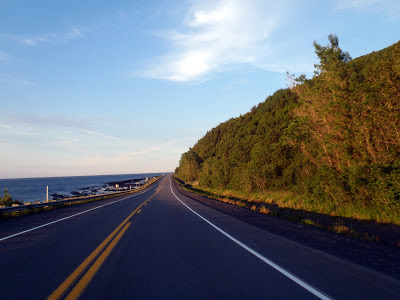 I don't remember where exactly I stayed that night, but I was happy to have caught the sunset over the mountains and ocean. I realized that its not very common to see the sun set over the ocean water on the East Coast of Canada...

Well this was a lovely drive. My true destination was Forillon National Park which was a nice way to end my journey east.