If this place isn’t haunted, nothing is Just a raw, unedited picture of the Cold War Military Base on East Mountain I’ve been some bizarre places tramping around the wilds of New England but this one has to take the cake. East Mountain in the Northeast Kingdom of Vermont has become a famous place for mountain biking...

If this place isn't haunted, nothing is

I've been some bizarre places tramping around the wilds of New England but this one has to take the cake. East Mountain in the Northeast Kingdom of Vermont has become a famous place for mountain biking but it was previously a Cold-War Military Base. Having been retired since the mid 1960s, its a places that's essentially been left to the elements for the better half of a century. I'd heard of this place before but I figured it would be just a few broken down buildings and not nearly as expansive as it turned out to be.

The Northeast Kingdom of Vermont is the least populated region of the 49th least populous state. I wouldn't be surprised to learn there are more moose than people in this area. I've traveled here before and found it to be a great place for mountain biking and solitary hiking. On this occasion, I wanted to bag East Mountain which is part of New England's 50 Finest Mountains. Its been a fun list to bag and I'll be damned if this wasn't the strangest mountain I've climbed.
East Mountain is located just North of Granby Vermont and is out there even by Vermont standards. There are only dirt access roads around the area and most of them aren't marked except for snowmobile trails. I'd recommend bringing your copy of the Vermont Gazetteer  if you should venture off here. It would be easy to get lost on any of the unmarked roads and abandoned logging trails.

Of the few people who do go up East Mountain, most take Radar Road from Granby, Vermont. I chose to take Radar rd from East Haven, Vermont which is essentially the same distance. Either way you go, take a mountain bike as the distance is long and there are gates to prevent cars or ATVs from going up the way. Here's a rough map of how I got there-

I parked just a little ways beyond the gate. There didn't appear to be any restrictions, but just to be on the safe side, I called Kingdom Trails, the mountain bikers association, just to be sure. They said people frequently mountain bike East Mountain from this direction and that there wouldn't be a problem. So I parked, packed up and headed up!

The road up was sort of paved, sort of gravel and sort of dirt. It wasn't really any of these at some points. There were big potholes and a couple of rough sections which would be tough for a car but easy on a bike. Most of it was shady too which was welcomed on this hot summer day. Its about an 8 mile climb to the summit. For the most part, its easy to follow as long as you stay on the main road. I encountered only one other biker on the trip up. Just before the final climb, you actually see the old military base and the road is paved from here on up. However, it is wicked steep!
There were some amazing views from the top... as long as you were willing to climb the structures that once housed military radar equipment! It wasn't too crazy, but I probably wouldn't do it twice. East Mountain is a significantly prominent mountain so I could see for miles and miles- all the way to Mt Washington. But as I walked around the base, the sights became stranger- 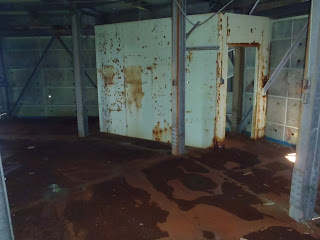 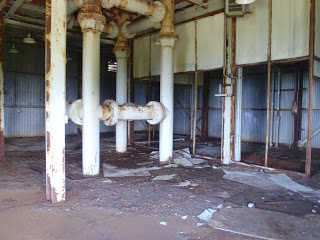 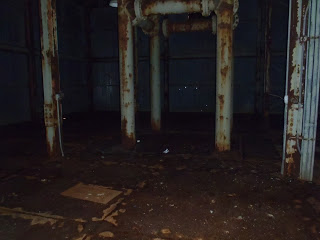 Although the summit had some crazy buildings, it was the other part of the base below the mountain which really felt haunted- 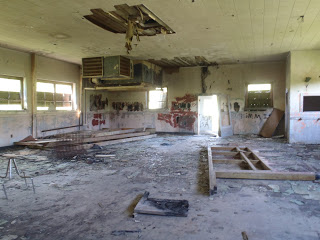 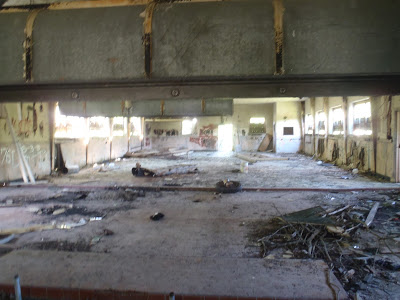 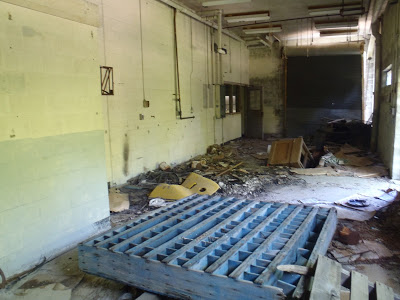 I felt like this was the kind of place that deserves to be on that "After humanity" show. At any rate, it felt genuinely haunted. I learned from some Granby locals that the place has been a hobo hideout and a Hell's Angels place in the past. It looked quite deserted this time, but there were some signs of life...

I'm not saying I believe in Zombie Apocalypses, an imminent nuclear winter or suvivalism... I'm just saying, if something like that happens, I got a place picked out.

We are a gravel road race called the Dirty 40 in the Northeast Kingdom. Our next race is called the Rasputitsa. It has a cold war russian theme. Can we use your photos on our facebook page if we give credit to you?

Sure! Of course! Just let me know what you need

I drove radar road from victory road all the way to the locked gate on the east haven side, where is the turn off to hike up radar/east haven mountain? I did see a couple turn offs (one was a locked gate, i think affiliated with plum river logging) but wasn't sure which one to take…..thx.

Old thread but… Follow Radar road all the way to the gate. The top of the mountain is a few miles uphill from there. you'll come to the abandoned "town" first. That's where the military staff lived and such. The base is another couple miles or more.. I forget exactly how far it is. Mountain biking this would be a feat for the fit biker. We used dirt bikes which were easy to drag under the gate. Sometimes the gate is open and you can drive right in but you want to leave a note at the gate so the loggers don't lock up and leave you on the wrong side of the gate. The property is privately owned and I've heard of people being abruptly asked to leave. The 'town' has clearly had years' worth of vandalism. There are modern, solar powered reflectors at the top used for what I don't know, so there is current use up there.

I've been up there a few times.. once we walked the whole way and it took all day. The next time we brought dirt bikes and dragged them under the gate. The last time we were there, the gate was open and we simply drove the truck up. I have a similar picture of my truck sitting there as the car in your photos..