Day: 15-16 Miles: 3,113 Location: Southwest Coulior, Middle Teton (12,804ft) Epic shot of Middle Teton Another day, another mountain! This day, it happened to be a spring ascent of Middle Teton in Teton National Park, Wyoming! Most people who travel to the Tetons for climbing intend to bag Grand Teton. I hope to climb this...

Another day, another mountain! This day, it happened to be a spring ascent of Middle Teton in Teton National Park, Wyoming!
Most people who travel to the Tetons for climbing intend to bag Grand Teton. I hope to climb this one some day, but I needed more people and gear for that one. Middle Teton can be climbed without ropes but definitely NOT without an ice axe and crampons. I've learned that it is actually ILLEGAL to be traveling through such places without an ice axe. Ahhhh Wyoming!
At first, I wasn't sure if even attempting to climb Middle Teton was worth it. See, in this part of the country, winter lasts until about June. This winter has also seen a biblical amount of snow in the Tetons and Winds. For the record, Yellowstone usually received 400 inches of snow in a season. They had, to date, received 700 inches of snow (and counting). So it wasn't looking good.
﻿The first thing one should do before climbing in the Tetons is consult a Climbing Ranger. These guys are hired by the park to constantly monitor the climbing conditions. So I pretty much asked the guy point blank "Is it a horrible idea to climb this time of year?" To my surprise, he said "Not at all, if you're prepared for winter conditions". I peppered the guy with questions about the route, avalanche dangers, recent conditions ect. and made a decision to try!

4:00AM the next day... the weather is good and its cold enough for climbing (12 degrees in the 'morn). I packed every single piece of cold weather gear and mountaineering gear I owned and hit the trail. I left from the Taggart Lake Trailhead. The first 4 miles to the beginning of Garnet Canyon were slow and cold. Cross country skiers have left a multitude of trails along the way and I had to resist the urge to follow them. At about sunrise, I was hitting the mouth of Garnet Canyon.
I ascended up the southern portion of Garnet Canyon above Bradley Lake. The central part of Garnet Canyon had some signs of avalanche dangers but I found myself a little nook where I could avoid the direct center without passing by the precipitous ledges. It is DEFINITELY still winter up there, I was traveling across some good hard pack snow but there were sections of post-holing. The trees of the canyon offered some good cover up to the base of Middle.

The very central part of Garnet Canyon was a safe, avalanche free route but I would not recommend venturing out of it! Just below Middle Teton, to the left (south) is the route up to the Southwest Coulior and to the right is the glacier splitting Middle and Grand Teton. The wind picks up pretty quickly beyond the cover of the trees. I used several small rock outcroppings to rest and warm up my hands.
It seemed like eternity, but I finally made it to the coulior. This is where it gets fun! In the summer, the coulior is a fun lil' 1,000ft scramble. The snow cover was insane and it was a good 2 hour climb from here. I've climbed higher mountains but the elevation was really getting to me. Perhaps it was the steepness of the route. Between steps I was able to enjoy some fantastic views of the southern Tetons and the Wind River Range.

Finally, the summit was in view! The last 300ft really tested my tolerance for heights, it was steep and exposed. I made it to right below the summit and everything was corniced and icy. I decided against going to the actual high point, to avoid the cornices. It would have been suicidal anyways. Besides, I was standing at about eye-level with the high point...whatever
﻿ 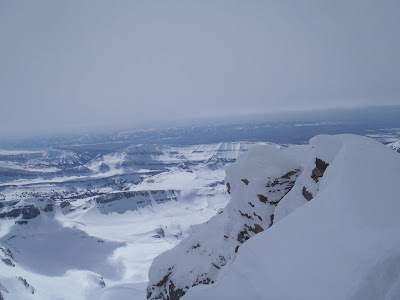 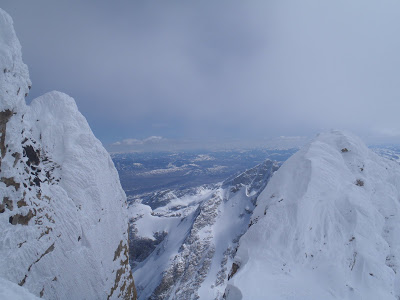 ﻿The descent down the coulior was about as slow as the going up. It was mostly down climbing with a death-grip on the ice axe. The temperatures up high were well below freezing and the snow was still pretty powdery in some sections. I made it back down to the base and switched from crampons to snowshoes for the climb down. Most people elect to cross country ski to the base but I only have the snowshoes.
It was obviously later in the day so the nice styrofoam snow that I had in the morning was gone. I was punching through most of the way down which was aggravating. I still followed the center of Garnet Canyon down with a weather eye for avalanche dangers. It took another couple hours to reach the entrance of Garnet and I had to redirect my route to avoid the edges. In the end, I decided to climb down to the Bradley Lake Area and then headed directly east to the road.
So I lucked out! The avalanche danger was low for the day and time of year. Plus, I had excellent weather that wasn't too hot or too cold! This was one of my more challenging climbs: 14 miles of Wyoming mountaineering and some difficult route finding for the time of year. Its early in the season for Teton climbing, but if the avalanche danger is low and you don't mind slogging through some powder, its not too bad! Sadly, this was my last western climb for the summer! I've packed my mountaineering gear up until August and I'm currently headed to the Black Hills of South Dakota!

Exploring and Hiking Yellowstone in the Spring II