Exploring and Hiking Yellowstone in the Spring II

Day: 14 Miles: 3,004 Location: Yellowstone National Park, Wyoming Strange colors I’ve been on the road for two weeks officially! Two weeks ago I was setting off from Southern California and driving through the desert. Now I’m sitting here in Jackson, Wyoming enjoying a well needed beer right downtown! Its been a heck of a...

Day: 14
Miles: 3,004
Location: Yellowstone National Park, Wyoming
I've been on the road for two weeks officially! Two weeks ago I was setting off from Southern California and driving through the desert. Now I'm sitting here in Jackson, Wyoming enjoying a well needed beer right downtown! Its been a heck of a trip and I don't think I could have asked for a better time. I've seen some of the country's greatest spectacles and also seen some great friends. The weather hasn't been perfect, but it's only prevented me from climbing one mountain. (knock on wood!) I'm feeling a little bit sad because I will soon be crossing the Continental Divide for the last time and leaving the West. I'm looking forward to Maine, but I do think I'm a child of the West and will soon return to these wonderful mountains and deserts.
I played the part of Joe-tourist again today and saw the other half of the park! I could go off exploring the backcountry, but I felt that was for another time. I don't want to miss anything as spectacular as Yellowstone Falls anyways! While I would have preferred to hike to it, the "Grand Canyon of Yellowstone" is best viewed from a short trail from the parking lot. I can't wait to come back and backpack alongside the river!

Yellowstone Falls was first, then I turned west and visited Obsidian Cliff and Roaring Mountain. Both were interesting, but not quite as amazing as the South end of the park. I spent a little time checking it out and headed off to the Norris Geyser Basin.
Norris Geyser Basin, in the opinion of this traveler, was the best part of the park. This is because there was so much variety of geysers and they were everywhere. Also, the lookout points gave the hiker better perspective of volcanic landscapes. Most of all, exploring Norris Geyser Basin was an adventure of the senses. That is, it was appealing to four out of five senses. It was visually stunning; there were hues of green, blue, orange, brown and red that are often hard to come by in nature. The thermophilic bacteria that survives in these geysers gives off these hues. The auditory side of the geysers was also very stimulating! Some geysers sounded like a babble while others sounded like an airplane! Every geyser had its own sound! 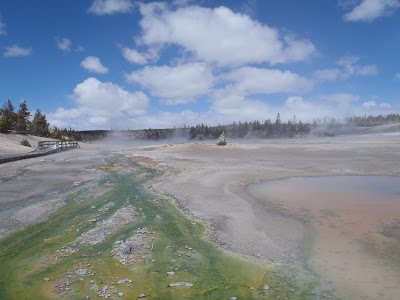 Although you can't touch the geysers themselves, you can feel the distinct heat that each gives off. Some are very hot while others are warm. Some might not prefer the smell; sulfur. The smell does help you realize that these geysers are very deep and have extensive underground networks though!

The landscape was unlike any other landscape I've ever experienced. I've seen a fair amount of volcanic activity in the Hawaiian Islands and in the Cascades of Oregon and Washington, but nothing like Yellowstone. Between Old Faithful and Norris Geyser Basin, I would recommend the latter.
Even with the cold temperatures, Yellowstone was still beautiful and less crowded. Summer is an excellent time to get crazier on the backpacking front, but it sure was nice to see the tourist-y things without any crowds!

Now its off to the Tetons!