Traveling pearls and things we want to come back to after our first experience in Sedona, Arizona From the Resort From towers of steel to towers of stone- as we wound around the final stretch of highway on our drive, we were greeted by a skyline far more beautiful than our hometown of Chicago. Colorful...

Traveling pearls and things we want to come back to after our first experience in Sedona, Arizona
From towers of steel to towers of stone- as we wound around the final stretch of highway on our drive, we were greeted by a skyline far more beautiful than our hometown of Chicago. Colorful canyons and southwest architecture was a welcome relief for these short-term snowbirds. Eager to escape another 40-degree week of weather in the upper midwest, we happily traded our boots for flip flops the moment we landed. The temperature read a comfortable 75 degrees and only cotton candy clouds dotted the sky. Finally, we were back in the Southwest!

We've always been fans of traveling during the "shoulder season" of major destinations. Hence, we tend to align our larger vacations just before Memorial Day and just after Labor Day. Though we had kicked around ideas of international travel, our hearts were more drawn to the Southwest where we've had dependably great vacations that suit our seemingly divergent interests. Though initially we thought Vegas, we must be aging maturing millennials when the idea of Sedona seemed much more appealing.

The outdoors are deeply ingrained in the DNA of Sedona. Everything from the homes, the restaurants, the art and of course the hiking is focused on experiencing the red rocks, canyons and the allure of the Southwest. While it naturally draws the hardcore adventures such as myself, we found there was an abundance of trails that were easily hiked without difficulty nor an abundance of crowds. In fact, I've never really traveled a place where wilderness areas were so accessible. However, when the mid afternoon came and we wanted to cool off, there were plenty of more urbane activities to suit my counterpart's more sophisticated preferences.

In us (and I'm sure a lot of couples) one's the adventurer and one's the cosmopolitan; Sedona fit both our travel pursuits perfectly.

I must hand it to Dee who is far more acute method of finding affordable yet classy places for us to stay. We wanted to be somewhere close to the vibrant downtown area though far enough away that we could enjoy some quietude. Like most our millennial cohort, we normally we prefer an AirBnB. This time we opted for a resort which was a bit of a gamble for us (when I'm on my own I'm usually camping or at a motel. But there's something to be said about having a posh place to spend the mornings, evenings and various siestas. Especially with a desert vacation, staying at the resort augmented our experience. She eventually found Sedona Summit which we would certainly come back to.

We really liked our little studio. I called it our classy little "base camp" but Dee liked the southwestern charm of the place which really melds with the natural landscape of Sedona. When the weather was warmest in mid afternoon, we took a break from exploring and idled by the pool. In the evenings, the spa was a must. Also, having a kitchenette was important so that we didn't end up eating out every single meal for the duration of our stay. 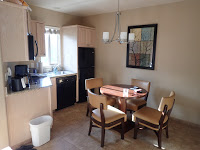 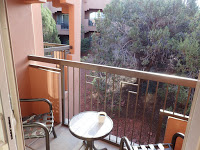 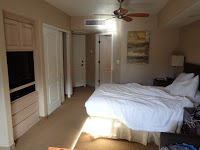 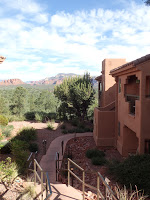 By the end of our trip, Dee commented that some of her fondest memories the time we spent on our little porch- sipping coffee in the morning enjoying a few beers watching the dazzling red rock sunsets. Its the little things, I suppose!

Sedona is a place with literally hundreds of hikes within the town limits and perhaps several hundred more within 20 miles of the town center. I was overwhelmed with what we should hike. Do we try and do the vortexes or go for something a little more off the beaten path? We settled on hiking at least three of the famous vortexes and allow time for discovering a few hikes as well.

On the first evening, we did a sunset hike of Faye Canyon which is about 2.6 miles round trip and totally flat. Perhaps it was because we were still in awe of all the red rocks but I think this was my favorite hike of the trip. For such an easy trailhead, we only ran in to three other hikers. At 6:30 in mid-May there was still plenty of light to illuminate the magnificent sandstone walls though the evening appenglow cast mysterious shadows among the arches an towers. It had an enchanted feel to it. Surprisingly, we learned it wasn't on the vortex list.

Courthouse Butte and Bell Rock Loop is a hike best done in the earlier hours. About 4.5 miles in length with modest amounts of elevation gain and loss, we were greatly rewarded with phenomenal views of the Oak Creek Valley. The trail almost immediately ascends to nice places to view the valley and from the top of Bell Rock, we were facing west where the rising sun made the famous red rock towers of Sedona look painted. Like Faye Canyon, it is all considered wilderness meaning that there is a total absence of anything motorized and the sounds of nature reign.

We hiked up Bell Rock first, then came down and rounded courthouse butte. I'm positive our necks were sore for the rest of the day because we kept standing in awe of the majestic rise of both buttes as well as a few distant towers- 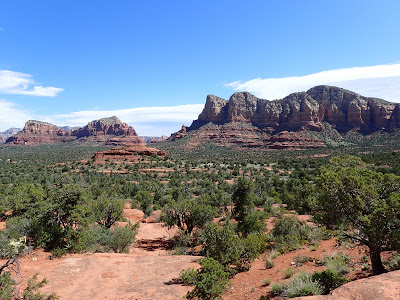 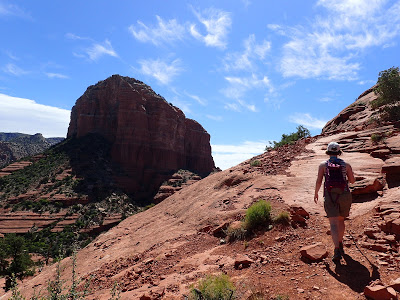 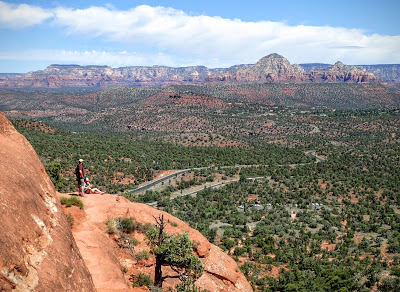 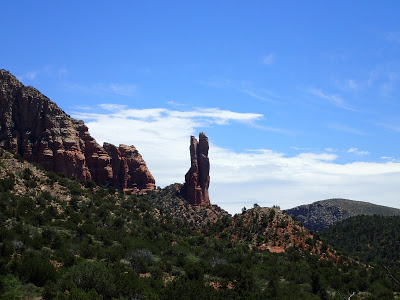 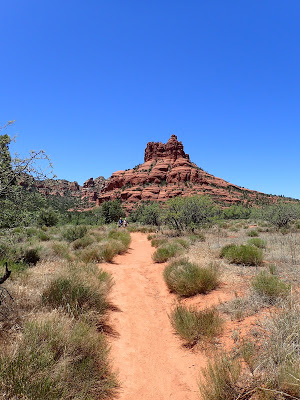 A little outside of the city limits and up the road to Flagstaff, the West Fork Trail often the favorite of many hikers. It is a very narrow canyon with higher elevation pine forests that are much more lush than that of the desert floor. I'd recommend getting to this parking lot very early as it fills up quickly.

After hiking West Fork, which is about 5.4 miles total, that put us at a perfect time to hit Slide Rock State Park which is a reliable, natural swimming hole a few miles south. Even in late may, the higher elevation plateaus which Oak Creek Canyon carves through can have snowmelt which means that the river is almost always flowing well in to the summer. Some sections have natural water slides, others have cliff jumping and then there's the deeper pools that offer a chance to cool off. We noted that it was a busier park with a lot more families. 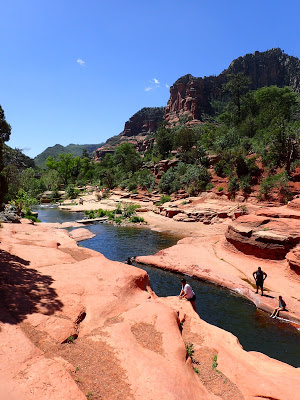 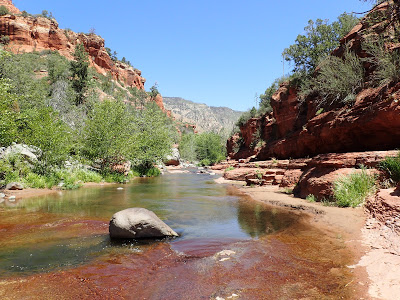 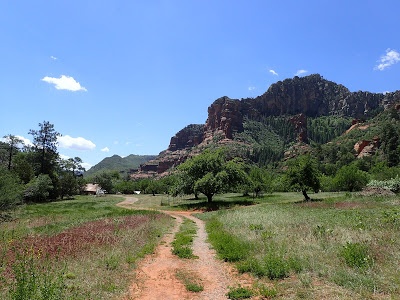 Our last hike was through Boynton Canyon which is a confirmed vortex. This canyon trail has a moderate amount of elevation gain though it is hardly noticed as the trail gets deeper and deeper into a vast wilderness. Much like Faye Canyon, this trail has all sorts of natural features to marvel at including hoodoos and arches. Though we liked hiking deep into the heart of the canyon, we found that even the early sections of the trail had plenty of sights. We wished we had done this one a little earlier when the birds and wildlife are really active. 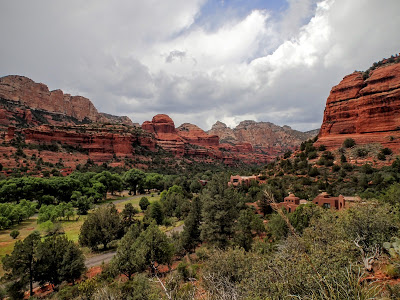 A new focus of ours when we travel has been trying to immerse ourselves in the cuisine that really defines a place. Living in Chicago, we have walking access to literally dozens of Michelin Stared restaurants. Our tastes have evolved over time to being more discerning than simply getting Mexican food just because we're close to the border.

Our best dinner was at the Hudson on the east side of Oak Creek. New to the bustling foodie scene of Sedona, we found it to be a posh but inviting place with all sorts of Arizona flair. The view alone was worth a cocktail though we were even more impressed with the Prickly Pear BBQ Baby Back Ribs. Initially we though we were going to get a few dishes and eat family style though we were both too hungry and too selfish to share ribs. It was a true taste of the southwest.

The bruschetta menu and wine list were also quite impressive. Even on the sunday evening we dined, the place was pretty packed with a mix of locals and visitors like us. Of course, we loved that nearly everything about it was locally sourced, not the least of which were the owners and chef. 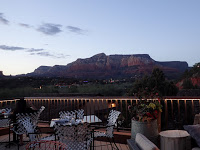 Other noteworthy places we dined at were Wildfower Bread Co which was nice for a lighter afternoon lunch as well as The Coffee Pot for diner-breakfasts.

To be totally honest, neither of us are big shoppers though we do like having places to poke around. The downtown area of Sedona has its charm- sort of a Southwestern-Americana feel. Tlaquepaque (pronounced t'l-ah-kay-pock-aye) and Hillside were the hub of all the fine art in Sedona. In fact, we loved walking through both locations during the evening and seeing all the pottery, rugs and sculptures, most of which are on public display. The art scene seemed accessibly bohemian though the photography for sale was world class. Had we more than a 600 square foot apartment to work with, I'm sure we could have added some southwestern culture to our place. 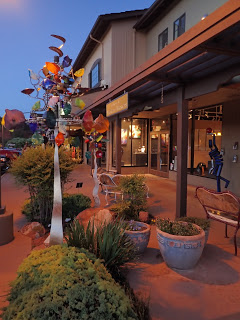 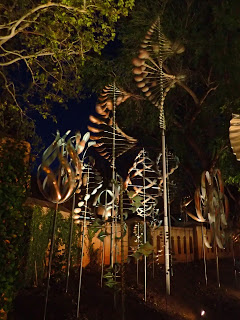 Things we missed or want to come back to

Even halfway through the trip we were planning on our next return, hopefully in the fall when the colors change in the canyons and the temperatures are still comfortably warm. Again, with hundreds of hikes, we didn't even scratch the surface though we covered well over 15 miles in the weekend. I'd liked to have hiked Wilson mountain which is a flat mesa that towers the highest over the valley. Additionally, though well traveled, pictures of the Cathedral Rock often appear on the covers of all sorts of Arizona publications and with good reason. Lastly, for more wilderness and solitude, we were told that the 5 mile Secret Canyon Trail was easily reached though often off the radar for the casual hiker.

We missed out on the Verde River Valley which is the Napa Valley of Arizona. Dozens of wineries dot this riparian oasis that is often seen on the way to Sedona. We almost went for Verde River Adventure's kayak wine tour though we simply ran out of time. Additionally, it would have been nice to at least spend part of our trip up in the cooler weather of Flagstaff, beneath the shadow of the highest peaks of Arizona.

Pretty good for a first pass though, no?