Guadalupe Mountain rises above the pancake-flat desert of West Texas high enough to support an alpine environment. Hiking it in the winter necessitated winter gear for ice and snow. “El Capitan” I couldn’t travel out to West Texas without visiting it’s most famous mountain and the only other national park of the state. Guadalupe Mountains...

Guadalupe Mountain rises above the pancake-flat desert of West Texas high enough to support an alpine environment. Hiking it in the winter necessitated winter gear for ice and snow.
I couldn't travel out to West Texas without visiting it's most famous mountain and the only other national park of the state. Guadalupe Mountains National Park is a beacon of preservation and biodiversity in the stark desert landscape. Once the road to the park leaves El Paso's outskirts, there is literally nothing between it and the entrance. For 80 miles, the only sign of human life is a few scattered ranches. It was not a boring drive, however. I've missed desert life deeply while living in the Midwest. Various mesas, dry plains and distant dormant volcanoes dot the marvelously desolate landscape.

Rising like a lighthouse in the distance is El Capitan, where the West begins (or ends). The limestone monolith is emblematic of the state even though it falls 700 feet shorter than the higher Guadalupe Peak. It was unusually cloudy and foggy the day I was in the park and the jagged edge of El Capitan was lightly shrouded in fog.

The trail begins just North of the Pine Springs Visitors Center and campsite. A very large network of trails leave from this area and it doesn't do the park justice to just spend one day hiking Guadalupe Peak. Hunter Peak, another one of Texas's highest, looms across the gorge created by Pine Creek. To the North and West of the beaten path of Guadalupe Peak are trails that seldom see visitors this time of year.

Its quite a steep trek to the top. The trail rarely flattens out as switchbacks up to the summit. Some of the ledges are precipitous at the start of the trail. After the first 1,400ft of elevation, the trail slips into the upper alpine forests of the range which are an abrupt divergence from the more arid environment below. Vegitation is quite think and trees grow to significant heights. Taller ranges in the desert are somewhat magnetic towards storms and moisture, creating "sky islands". Though the flora and fauna are not that different from the rest of the desert, they are far more abundant. 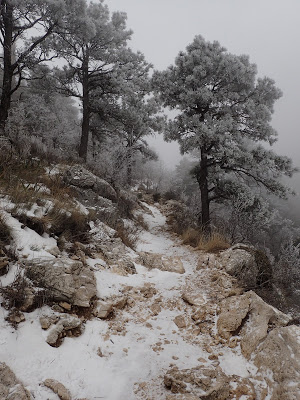 I happened to visit the desert during the coldest part of the winter and an earlier storm had blanketed the mountains in about a half a foot of snow. Cactus were covered in rime ice and the trail itself was an icy monorail. I actually had to wear crampons and I was thankful for having the forethought to include them in my desert inventory. At times I was punching through some significant powder.

Though the snow and ice created an ethereal look, I would not be seeing the panoramic views that often draw people to the highest mountains of Texas. Fog became denser at the higher elevations but it made the sights more dream-like 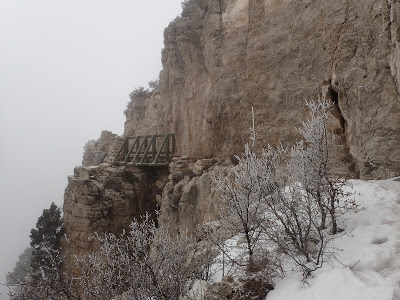 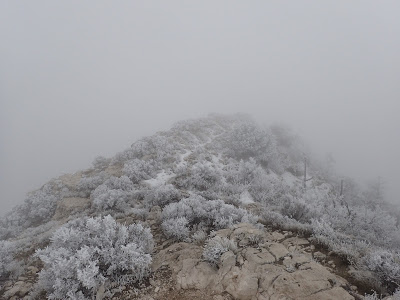 Finally standing on the summit, I had no views. However I was completely alone and had not seen anyone on the entire hike which is quite rare for this mountain. The geocache at the top had been signed a few times over the last week but I was the only one today. Pleasant solitude made a view-less hike worth the while. Without wind at the summit, everything was silent and somewhat eerie.

Often I rush my way up summits like these to make sure that I can tag the top. Next time I would like to have camped overnight at the site at 8,000 ft. I'm sure the stars were glorious on a clearer night. Nevertheless, my brief stay in the park brought me to 33 state highpoints.