Mendon Peak is the highest peak in Vermont without an official trail. Its a sought out peak for those trying to complete the 100 highest but its a magnificent peak in itself which has a somewhat unspoiled wilderness. For a bushwhack, the summit has great views. Mendon Peak, Vermont I’m never sure what I should...

Mendon Peak is the highest peak in Vermont without an official trail. Its a sought out peak for those trying to complete the 100 highest but its a magnificent peak in itself which has a somewhat unspoiled wilderness. For a bushwhack, the summit has great views.
I'm never sure what I should be expecting on some of these bushwhack hikes around New England. I've seen some pretty fierce and thick spruce in the past and wondered how anyone could get through them. Bushwhacking peaks up north requires a certain persistence and ambivalence towards getting soaked, muddy, covered in bug bites and spruce cuts. Of course, sometimes its actually fun too. Mendon Peak would be my first "real" bushwhack I suppose, although hiking Fort Mountain in Maine wasn't exactly easy either.

Getting to the summit of Mendon Peak isn't an entire bushwhack but it does require navigation along a bunch of unmaintained logging roads and abandoned trails. There's pleanty of online and written resources about the hike but if you're doing it for the first time, it can be confusing. I'd almost expect that you're going to find yourself turned around or confused at some points. I certainly did.

The parking lot for Mendon Peak is the same that serves for parking on the Killington Peak Trail. Its at the big hairpin turn on Wheelerville Road. Last I checked, the bridge was washed out on the southern side of Wheelerville Road- the better way to get there is turning off of Route 4 from the North. The parking lot has capacity for 12 vehicles, I suppose.

The logging road begins just to the right of the Killington Trail and is gated. There's no driving past this point, but I've seen people on ATVs there before. I think people cross-country ski in to this area in the winter as well. Regardless, I took off on foot on the logging road. There is a camp which appears shortly after the start and the trail continues on, roughly paralleling eddy brook. Just past that camp, it forks- bear left. If you go right, you will find another camp/house under contstruction. As of May 2014, there was some pink fluorescent tape on the trees marking this turn-off, but no distinct markers after this point.
As a good rule of thumb, the trail doesn't venture too far away from Eddy Brook after that turn-off although there are numerous tempting side roads which look in better repair than the road you're on. I did get turned around a few times. Again, don't stray too far from the brook.

Different trip reports have different accounts of the crossings. I counted four river crossings but others have reported 3-5. The road makes it pretty obvious where and when you cross and I didn't find any of the crossings to be too difficult. The first one at the bottom was somewhat slippery but I was too lazy to take off my boots- I made it across without problems. The road deteriorates significantly after this part but its easy to follow. The third brook crossing brings you to a small ridgeline between two forks of Eddy Brook and follows up that ridgeline briefly before making the final crossing. There are signs that warn of tree skiing in the area, strangely enough.

After making that final crossing, the trail begins ascending the steep north-eastern flank of Mendon peak. There is one switchback shortly after crossing the brook and gaining elevation. The sharp turn banks lef has the 1st cairn- 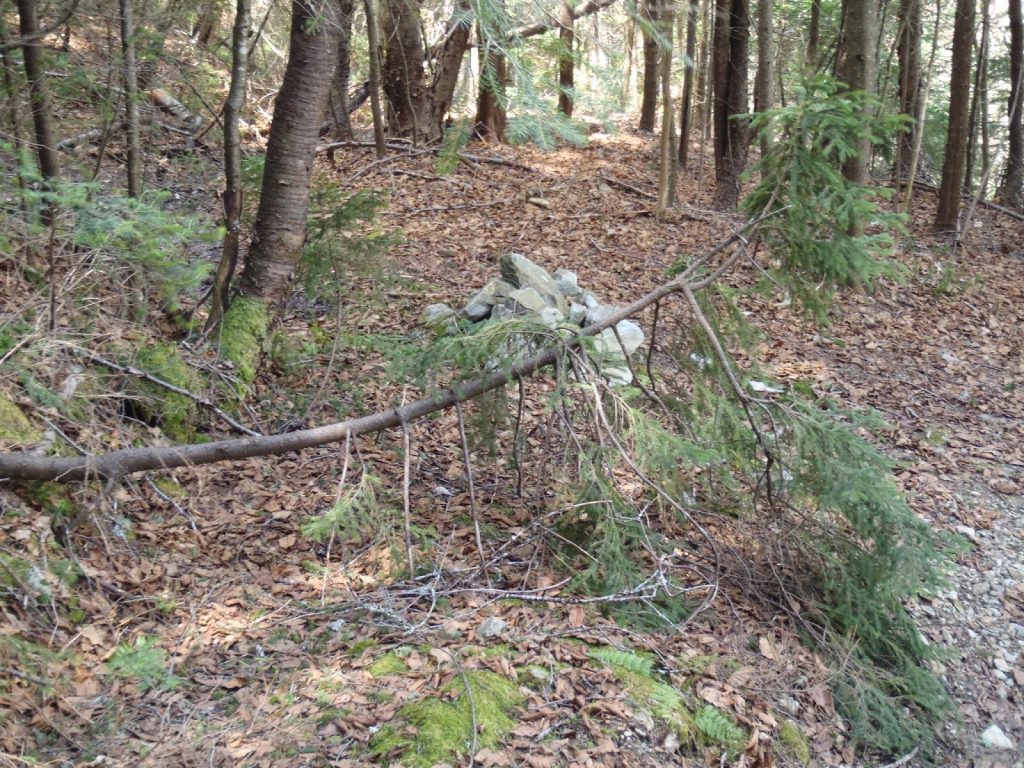 It's dealer's choice as to whether you begin your bushwhack here or further up. Most elect to pass by here, continue past a second and third cairn before heading off towards Mendon. I think this is the preferable option- saves less time ascending through steep and thick areas of spruce. After the third cairn, I did my best to make a b-line to the summit.

I should note that the third cairn was not as noticeable as the second and first, however there was a curiously abandoned ski stretcher past the third cairn which served as another marker (especially on the way down)

It was pretty much a bushwhack to the summit. There are numerous herd paths which are helpful in cutting through the spruce, but most of them are moose-paths that eventually dead end. It didn't take me more than 40 minutes to reach the summit from the trail, but there were some dicey sections here and there. Most of them were towards the middle 1/3rd of the bushwhack; as the summit became closer, a herd path appeared and made the going very easy. The Eastern Peak had excellent views from a bare granite knob and there were ledges between the east peak and the true summit which also had views. It was unexpectedly enjoyable-
Other famous Vermont Mountains were visible from the summit-
So the summit was surprisingly enjoyable. Not only were the views panoramic, but it was nice to have a very alpine summit all to myself without the company of a ski resort. Most bushwhacks are only to a heavily wooded spot on a map with a canister; this one felt like a real mountain

Coming down is always harder when you're bushwhacking and it took almost an hour to find the trail again (no GPS here!). Nonetheless, I eventually made it back down and I headed over to Pico Peak for another climb.