On the 5th day I crossed to Swan’s Island and rounded Mount Desert Island, the largest island on the entire trail. This is part of a series of posts about my 200 mile trip up the coast of Maine by the Maine Island Trail. Previously: Kayaking Across Penobscot Bay and Stonington, Maine

On the 5th day I crossed to Swan's Island and rounded Mount Desert Island, the largest island on the entire trail.
This is part of a series of posts about my 200 mile trip up the coast of Maine by the Maine Island Trail. Previously: Kayaking Across Penobscot Bay and Stonington, Maine 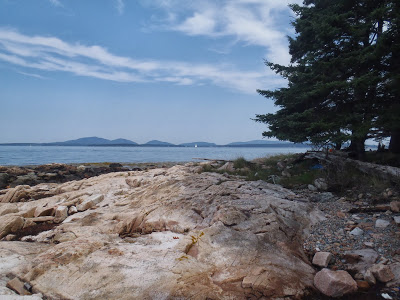 Day 5- Another uncommonly gorgeous morning. How lucky can I get? The ocean was glassy and the wind was non-existent. I went through my morning routine and prepared to make the crossing to Swans Island and onward to Mount Desert Island.

I certainly haven’t always been this lucky when I kayak this part of the world. Two summers ago I paddled through two days of thick fog when I was kayaking from Bar Harbor to Stonington. Thick fog and fast-moving currents made for a harrowing day. I prefer to rely on my compass and map skills that I’ve had since the scouts. Although they didn’t fail me, it was a hell of an experience.

Last year, also about this time I was circumnavigating New Brunswick’s Grand Manan Island just off the coast of Lubec where I encountered similarly difficult conditions. Winds, waves, chop and of course those wild tides made for a tough trip. All of these things were on my mind in the planning phase of this trip and I would have never guessed that I would not have to deal with so much as a whisp of fog.
With advantageous conditions I decided to take a bold but shorter route around Mount Desert Island. MDI, as it’s called, is Maine’s largest island and is the most famous of them all. As far as paddling goes, one can either take the more protected but longer route on the land-facing side of the island or the shorter but more exposed ocean-facing side. The land-facing side is comparatively easier but not a cake-walk. Kayaking up the deep Blue Hill Bay is strenuous and narrow channel closest to the mainland all but dries up during low tide.

Swans Island was a sleepy little island without much in the way of resupplying so I had to head further to Southwest Harbor. While the conditions were great, the boat traffic was as heavy as it was in Casco Bay. Cruise ships, tall ships and clippers were all coming to MDI and I don’t exactly show up on radar.  I had to plan my crossings carefully. The narrower channels between the Cranberry Islands were absolutely overrun with traffic. Nevertheless I was still able to enjoy the gorgeous view of Somes Sound which people say is the closest thing to the Fjords of Norway on the US east coast. I pulled in to Southwest Harbor and re-supplied.
At this time it was roughly 3PM and I had another 15 miles to go around the exposed southeastern portion of MDI. Fortunately this happens to be one of the most gorgeous stretches of the Maine Coast which is best seen by boat. Part of Acadia National Park, the cliffs of MDI are almost always featured in tourist publications of Maine and New England. Park roads weave in and out of the varied coast and provide some views but it is nothing like seeing it by kayak.

It is a stunning but somewhat peculiar sight to see. Larger currents and waves collide with the jagged cliffs which have been shaped by the eons. Just above the cliffs are walls of pine trees as thick as any rain forest. Then, every so often, there’s a sprawling coastal mansion. It is just so strange to see the summer retreats of celebrities, politicians and American magnates dispersed along one of the more rugged coasts I’ve ever seen.
I paddled nearly 33 miles that day which meant I was paddling up into twilight. Finally reaching Bar Harbor, I pulled into shore and spent the night. Compared to my previous campsites, the passive company of a small city was actually a little comforting. I didn’t exactly interact with anyone but it was nice to be around people for a little while. The next stretch from Bar Harbor through downeast would be completely solitary.

Hi Joe,
Can you contact me. I just published a book and I would love for you to review it. I think you will see we have so much in common. The book starts in Bethel Maine, hiking, skiing, then over to Vermont, Hiking and skiing, then on to Colorado and Arizona.
I can't find your email address on your blog.
I found you on Outdoor Blogger Network. Would love to chat,
Kristen Lodge
lodgek@gmail.com
kristenlodge.blogspot.com

My name is Jocelyn and I am with Dwellable. I am looking for fun and authentic blogs about Mount Desert Island and yours happened to catch my eye. If you’re open to it, shoot me an e-mail at jocelyn(at)dwellable(dot)com.

Hope to hear from you soon!
– Jocelyn