“Say Ya to Da U.P., Eh?” Hiking around the Upper Peninsula of Michigan

Day: 28 Miles: 5,700ish Location: Pictured Rocks National Lakeshore, Michigan (da U.P.) On to da U.P., eh?! I found the Upper Peninsula of Michigan to be one of the most delightful parts of the country I’ve ever visited! It really is a cultural enclave. Essentially, this area is a huge logging and mining location which... 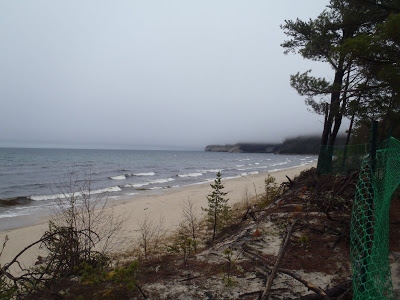 On to da U.P., eh?! I found the Upper Peninsula of Michigan to be one of the most delightful parts of the country I've ever visited! It really is a cultural enclave. Essentially, this area is a huge logging and mining location which has caused there to be a huge amount of immigration of Finnish and English people. The culture of the U.P. is friendly, proud, quirky, blue-collar, and hunter-friendly. They have their own dialect of English that's similar to the way that people in Canada speak. In some areas its so pronounced that it can be difficult for an "outatowner" to understand!
Yoopers, as they call themselves, are more closely associated with Wisconsin and Canada than they are the Lower Peninsula of Michigan. Everyone here roots for Da Pack (Packers) in American Footbacl and they call folks from the Lower Peninsula, Trolls or "flatlanders". I didn't feel like there was any real animosity between the two peninsulas, just a lot of regional pride. I can understand that, its similar to the way we Californians have rivalry between Nor-Cal'ers and So-Cal'ers.
The National Park of the Upper Peninsula is Pictured Rocks National Seashore. This is another great place for kayak touring and hiking. Hikers are treated to a large number of waterfalls, rivers, and smaller lakes. Hiking along the coast of Lake Superior is also a real treat! Calling it a "lake" is somewhat of a misnomer. Its an inland sea and should be treated as such. As you can see from the picture above, there are real waves and currents on the lake! I was able to appreciate the beauty of Superior by hiking on the lakeshore trail. This trail brings you along the few beaches and the massive cliffs of the lakeshore. There are several lookout points where you can see the 200ft cliffs and arches.
Spring turned out to be an excellent time to hike the park! It was muddy and rainy but this caused the waterfalls to be really flowing. The seldom seen Bridalveil falls was flowing in full force down one of the cliffs. This happens for maybe a month out of the year. If you go to Pictured Rocks in late summer, the waterfalls will be a mere trickle. Hiking in the spring requires some hardcore raingear and a solid pair of boots. There were sections of the hike that had 2-3 inches of standing water. But hey, it kept the crowds down!
There's one rather "touristy" thing that you must do when visiting the U.P. ; eat a pasty! Pasty is an English-miner dish that's become a staple of the Yooper diet. Its a meat, potato and carrot filled turnover that was originally ment to be easily carried down into a mine for lunch. The dough is usually fresh baked and similar to a biscut. You will have to greatly contimplate whether you will eat it with gravy, ketchup, or nothing The "Gravy-vs-Ketchup-vs-Nothing" debate is what determines your personality in the U.P. Chose wisely!
I had mine at a total local bar somewhere 'sout of the national park. I was a little bit worried that I'd invaded a local-pub but they ended up being happy to have an outatowner! I struck up many conversations with the Yoopers and we all told stories of travel! One guy was talking about the John Muir Trail in California! (hey I know a little bit about that place!) 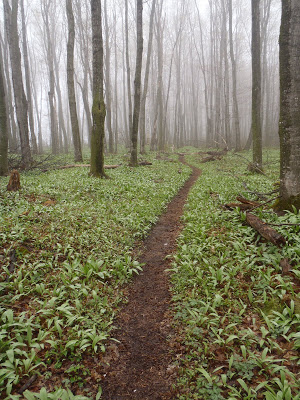 The U.P. was a wonderful experience for me! This is closer to the top of my list of places I want to visit again! "Say ya to da U.P. 'eh!"