Minutemen Missiles, Badlands and the Geographic Center of America

Day: 20 Miles: 3,700ish Locations: Minutemen Missile National Historic Site, Badlands National Park and Belle Fourche, the Geographic Center of the Nation The Badlands! Whew, what a day! It turned out completely different then I planned! I was about 60 miles out of Rapid City, South Dakota and came across a very interesting National Historic...

Day: 20
Miles: 3,700ish
Locations: Minutemen Missile National Historic Site, Badlands National Park and Belle Fourche, the Geographic Center of the Nation
Whew, what a day! It turned out completely different then I planned! I was about 60 miles out of Rapid City, South Dakota and came across a very interesting National Historic Site. In the Cold War, South Dakota was our central hub of nuclear missiles pointed at Russia. We had over 1,000 missiles spread out over the ENTIRE western part of South Dakota. The ranger remarked, "If South Dakota were to ever cede from the United States, it would be the 3rd most powerful country on Earth."


This was one of the most profound historic sites I've ever toured. The ranger, a veteran of the Air Force, will actually take you down into the control center for the Minutemen II Missiles. To put it bluntly, you get to stand in the control center of a place which could have blown up the Earth. You get to see the living quarters, the underground elevator, and the control room itself for free.
If there is any doubt in your mind that we needed places like this in the Cold War, please visit this site. The rangers do a very good job of explaining the concept of "deterrence". The ONLY thing stopping Soviet Russia (and Cuba) was these Missile Silos. It is extremely important that sites such as these be preserved for history. I highly recommend people my age visit this site and gain better perspective on the Cold War and how close humanity came to extinction

After the tour, I headed off to the Badlands! The National Park is one of the more crowded ones in the country, but it doesn't have the scenery that I saw in Wind Cave National Park. The wildlife viewing is excellent, especially in the spring and most wildlife can be seen from the car. Unfortunately the hiking is not so great. There are a couple of established trails and hiking off trail is permitted in the park. However, there just wasn't much to hike to that you couldn't see from the car. I know that kind of defeats the "spirit of adventure", but I like to hike TO something and see things along the way. Ahh well, it was worth the drive anyways!
The NEXT adventure of the day was a highly unique one. I went to the Geographic Center of the United States near Belle Fourche, South Dakota. There are actually two markers. The first marker is in the actual town of Belle Fourche and is at the Tri State Museum. This is a very nicely done granite marker with a plaque and the 50 state flags. Its a huge part of the town's pride. This is where most tourists get their pictures.

I, however, am not a tourist.
So just like I have to get to the actual summit of a mountain, I have to get to that EXACT spot that is in the center. This is a far more difficult affair. First of all, most of the directions to it are ambiguous at best. Basically, the center is about 20 miles north of the town on Old Highway 85. (I'll post specifics on the directions later)

Anyways I took the wrong road and drove 8 miles down it. It was night, by the way. I searched all over the place for the damn thing and it was nowhere. I reread the directions and realized that I'd missed the true road by .7 miles. Damn! 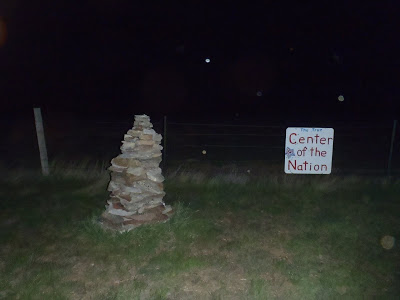 So I finally got back to the highway and found the real Highway 85. What do you know, there's a sign "Center of Nation 7.8 miles". What a strange sign to see on a highway. I turned the car and carefully marked my odometer.

I drove right past the damn thing ONCE AGAIN and got really frustrated. I mean, in the day, its pretty obvious, but its pitch black outside. I spent 30 minutes in the Middle of SOUTH DAKOTA roaming around a prairie at NIGHT trying to find a stupid cement block and pole that just says CENTER. You ever have moments where you actually realize the absurdity of what you are doing? That was one of those moments.

I didn't find it and gave up. But... as I was driving back, I saw a little pile of rocks. Could this be it? A poorly painted sign let me know it was. I WAS THERE!!!! After 4 hours of searching, I found the actual marker! (It always has to be difficult for me) From here, I hopped the barbed wire fence and walked 50 yards into the prairie to the cement block. There's a pole, a USGS marker, and it just says "center". What an uninspiring way to mark the center of the United States. But hey, I was happy!
So there you go, I made it to the middle-ist part of our country. If you plan on doing the same, don't go at night. That's my story.