“Hours slide by like minutes. The accumulated clutter of day-to-day existence — the lapses of conscience, the unpaid bills, the bungled opportunities, the dust under the couch, the inescapable prison of your genes — all of it is temporarily forgotten, crowded from your thoughts by an overpowering clarity of purpose by the seriousness of the...

One of the few major advantages to working in EMS (Emergency Medical Services) in America is that you work only 10 times a month. For crazy fools like me, that means that 20-21 days of a month can be allotted towards ridiculous pursuits such as climbing and mountaineering. So, on Monday evening I decided to check the weather and conditions up in the San Gabriels. We had recently received good snowfall at surprisingly low altitudes meaning there could be enough to do some decent mountaineering. Sure enough, as quickly as the thought occurred to me, I was packing my crampons, ice axe, snowshoes and other heavy shit into my backpack to set off for Mt. Baldy!

﻿Background on Mt. Baldy
Mt. San Antonio, colloquially known as "Mt. Baldy" is the tallest mountain of Los Angeles County. Los Angeles County is an interesting mix of three distinctly different environments. Of course, there's the hustle and bustle of Los Angeles. As you move north, away from the city's epicenter, you pass through towns like Hollywood, Beverly Hills, and Pasadena. If ever a city less than 150 years old could have an "old town", Pasadena would fulfill that title. However, just north of Pasadena is the San Gabriel Mountains which is a rugged, wild, east-west range. Mt Baldy is the highest mountain of the range at 10,068ft. What's most interesting is that while Pasadena can be experiencing a dreary rainy day, Mt Baldy will be shrouded in a fierce blizzard that can dip to arctic temperatures. This mountain range creates a rain shadow for north LA county which is part of the Mojave Desert. All of this is within one single county!
﻿

This was a real spur the moment climb. I literally looked up the conditions the night before I left. Mt. Baldy is very close to everything in Los Angeles in Orange County which is nice. It took me an hour to drive up and before the sun rose I was already on the route. There are several established routes up the mountain and a whole host of others made up by cross country skiers. This was my first winter ascent up Baldy, but I've climbed it twice before in the fall. My goal was to hit the scenic and precarious "Devil's Backbone" and follow that spur up to the summit. Normally there is a simple class 1 trail to the backbone, but I wanted to a real climb.

I parked over at Manker Flats and put up my US Forest pass. If you plan on doing Mt Baldy, make sure you buy a pass; its all national forest land. I set off upon the snow covered Falls/Baldy Road which is a road maintained by the Ski resort east of the actual mountain. This passes by scenic San Antonio Falls. You can follow the road all the way to the ski resort, but I elected to hike off at Manker Creek. By the looks of it, a handful of other mountaineers had the same idea.
Manker Creek had a graceful winter appearance to it. The trees had that natural blanket of snow that people try to vain to recreate on Christmas trees. The combination of the pleasant "babbling brook" sound and fresh pine tree smell made it therapeutic. Of course, it was still only 28 degrees F outside, but I was bundled up in full gear and gliding across the styrofoam snow that mountaineers are so fond of. The conditions were almost perfect! 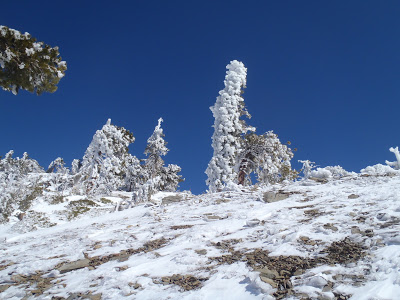 As the sun rose, I was hitting some class 3 terrain that would lead to the Devils Backbone. The snow was still great for crampons and an ice axe but I started hearing a low rumbling noise not quite loud enough to be an avalanche. As I crested upon the rim of a gully, I looked down at a fast moving river... of SNOW! In the gully was several thousand fist-sized balls of ice and snow tumbling down the mountain at high speeds! This wasn't an avalanche, it was a constant stream of ice and snow that was falling off trees. Some of these ice balls were bowling ball sized and about as heavy so I navigated away from patches of trees. Crossing across a heavily forested part of the route would be like a deadly game of Mountaineer's Frogger.

The Devil's Backbone and Summit

I reached the Devil's Backbone around 10:00 and had great views of both Los Angeles and the Mojave Desert. From here, I could also see Mt San Gorgonio and Mt San Jacinto, two other formidable Southern Californian mountains. The backbone is a knife's edge of snow and rock requiring the climber to be conscientious of every step. Its not particularly technical, it just necessitates painstakingly slow movement and some backtracking. I finished this part with my ice axe and crampons.
After the backbone, it was a simple walk-up to the summit. At 10,000ft walking uphill feels like sprinting and this last half a mile took about an hour. The summit was a complete ice field but calm otherwise. I had time to snap some pictures and explore a while, but it was already 2:00PM and I needed to get back down. I did have a rather jarring experience when I foolishly slipped and slid down the ice field a good 100ft before self arresting. I was bruised up and rather embarrassed, but fine otherwise.

The climb down was incredible; it was late afternoon and the sun and clouds caused gave the landscape and ethereal look. I had to take the Backbone as slowly as I did on the way up but I had the pleasure of watching the sun set. Finally, I reached the last section of the route which brought me up and walked back to my car in the dark.
This was my first winter ascent of the season and it was great to do somewhat of a gear shakeout. I'm planning on bagging several peaks in the forthcoming season, so stay posted for further guides and updates on mountain conditions!

Hi Quincy, thanks for sharing your experience…just came by your page. I am planning to hike up the devil's back bone however, I have not hike for awhile. I hike here and there on short hikes was wondering if I would be able to handle this trail. What gears would I need? can you give me some inputs. thank you!

It is a fairly tough hike, all things considered. Lots of elevation gain and loss. I would have a very sturdy pair of boots, food for a whole day and about 3 liters of water. Certainly a map, compass and GPS would be necessary. If hiking in the winter, an ice ax and crampons are necessary. Good luck!

QUINCY, why didnt you go up via the snow hut?