Three days alone and afloat in one of North America’s most remote and rugged wildernesses which stretches across the international boundary of Texas and Mexico. Deep in the Heart of Boquillas Canyon, Texas-Mexico Even the most hardened of Chicagoians begin to get restless in the dead of winter. While many will fly off to Hawaii,...

Three days alone and afloat in one of North America's most remote and rugged wildernesses which stretches across the international boundary of Texas and Mexico. Even the most hardened of Chicagoians begin to get restless in the dead of winter. While many will fly off to Hawaii, Florida or the Caribbean, I'm feeling the familiar tug of the desert which is what I've missed the most about living in the East and the Midwest. For the first time in my early career, I took a full week off from work and headed off to West Texas. El Paso probably doesn't top the list of snowbirding Midwesterners but I've always loved making the trip to see the family. We spent four days celebrating a birthday and enjoying the warm company of family and the Chihuahuan Desert. When our time together ended, each made their successive trips to the airport while I rented a car and headed east. The destination was 5 hours any maybe only 2 gas stations away- the Big Bend of the Rio Grande. 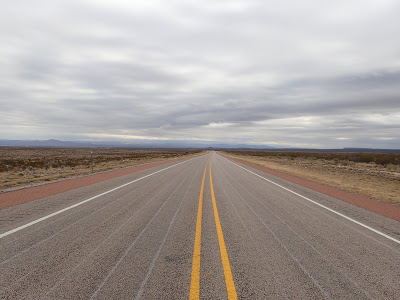 The controversy and standoffs that frequently make the news of the international border are unheard of it this stark corner of North America. Surrounded by 200 miles of desert and one of the most remote mountain ranges on Earth- the Sierra Del Carmen, you could say that this border is as insignificant as a line on a board game. Though its been more or less settled for centuries, the Spanish named the area "El Despoblado" or "The uninhabited" after surveying a land mostly devoid of people. Five hundred years later, not much has changed. My ultimate destination, The Rio Grand Wild and Scenic River is the least visited national park unit in the entire NPS system. The only other unit that is comparable is Aniakchak National Monument which is located far west on the Alaskan Peninsula and can only be reached by boat or plane. Despite its proximity to Big Bend National Park, no more than 300-400 people run this river in a year and almost all of them do it in March. To get to Big Bend is a long drive from essentially anywhere. There are no major cities in a 200 mile radius. People tend to fly in to El Paso or Midland-Odessa and rent a car from there. A glorious drive across the West Texas desert awaits. While I'm no stranger to long lonely roads myself, I thought it unusual to drive 150 miles without seeing a single service center or gas station. Cell phone reception is spotty and limited. The closest settlement of any population is Terlingua-Study Butte (pronounced "stoo-dy" butte). One might expect this town of 250 residents to be just a hole in the wall. Surprisingly, the town is really more of a Austin-Culture meets West Texas Frontier. Cozy restaurants, playhouses and music parlors dot this dusty town creating a cultural oasis in an otherwise harsh landscape. Musicians established in the competitive Austin circuit frequently make their way out here for shows. They may not be a town in the country with a greater ratio of cultural outlets per capita. 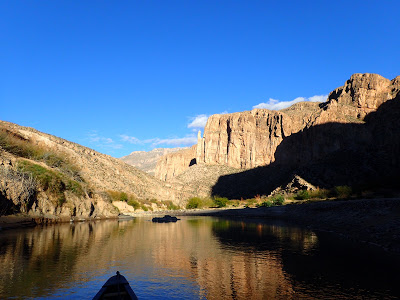 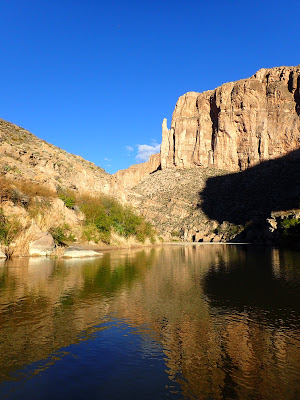 This was hardly anything like a true pioneer trip down a river though it felt that way at times. None of the working technology I carried was particularly cutting edge; just a boat, extra paddles, tent, food and water. It felt good to live this simply, even if only for half a week. After a day gazing at the innumerable monoliths of this desert mountain range the evening were filled with delightful inactivity that was a far cry from boredom. Once the sun went down, I was contented to build a small campfire and stargaze. These were rare moments in my 20s when I didn't feel the compulsive need to fill my idle moments with goal-directed activity. The stars were, of course, luminous and countless. I laid on my back next to the campfire light and spent hours just looking up. The first night I camped in a particularly deep gorge and the dark, phantasmal ridge dominated created a haunted, almost unwelcome affect to the canyon. I felt like an intruder. Extreme temperature fluctuations characteristic of the desert meant that the nights were as cold as they were in the midwest but quickly gave way to tropical warmth in the mid morning. I continued my float down the canyon which opened up after Boquillas.

Eventually I did find a place that was hike-able. Tying my boat securely and well above the highest waterline, I found some type of a heard path to follow. From high above the valley, the river's life-sustaining power was more appreciable. I suppose all canyons have a way of forcing one to see the power of water over a long enough time period but every time I am amazed. The large mesa in the distance and the pinnacle of Schott Tower rising 5,000 above the river were all plainly visible. Still, the green ribbon of the Rio Grande looked calm and serene, despite the cataclysmic effect it has on sandstone. 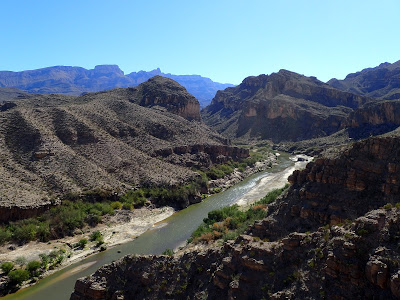 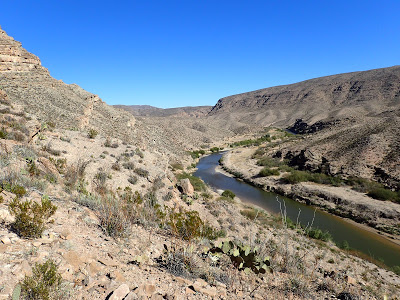 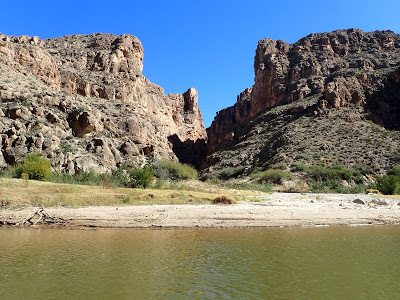 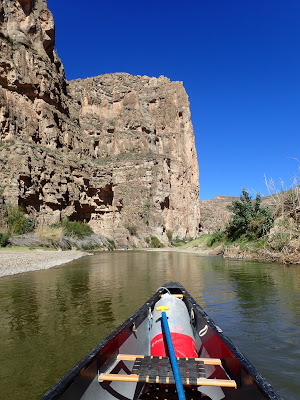 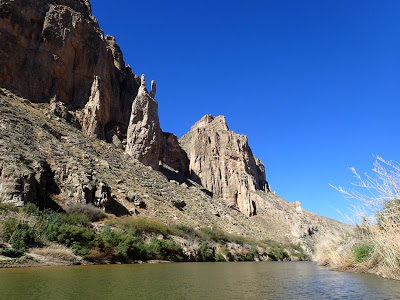 Onward I drifted. An odd thought occurred to me at one point. Though this would not be the furthest nor the longest I would have spent away from others, I don't think I've ever felt more cut off from the world. If a war had started, a pandemic had broken out or an atom bomb was dropped somewhere, I wouldn't have known about it. I was just too off the grid. Its hard to describe how the canyon continues to unfurl; every minute seemed different to me and each bend had a new and glorious set of towers, ridges and notches. In the final third of the trip, however, the river abruptly leaves those features behind as it enters a flat floodplain with strongly divergent scenery: 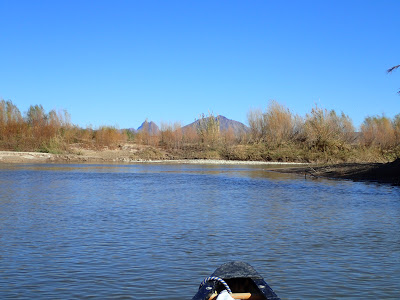 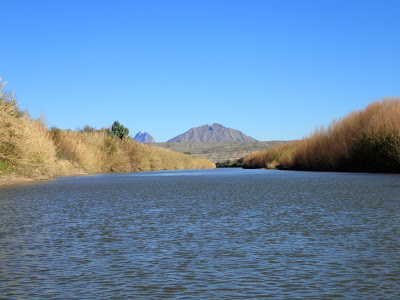 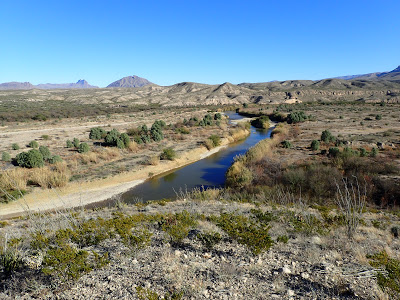 The flat and straighter sections of the lower third were not without scenery but it felt like I was paddling a different river. The channels were wide and rapids were few and far between. Life grew more densely and abundantly at the river's edge where 12 foot reeds created green walls. When I did find another brief break in the flora, I was able to climb a small ridge and catch an overhead glimpse of the jungle-thick foliage. Fortunately I did finally find an elevated sandbar to camp on for the final night. As it was an island in the middle of the river, it was a bit funny to me to think of pitching my tent on the international boundary. No-one and nothing disturbed me as the site was on the land of the national park but I wondered if the boundary was technically bisecting my tent. Another night of campfires and stars made me wish I could spend more time on the river. 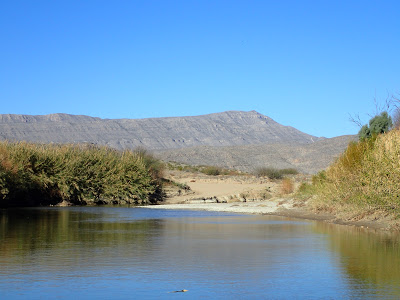 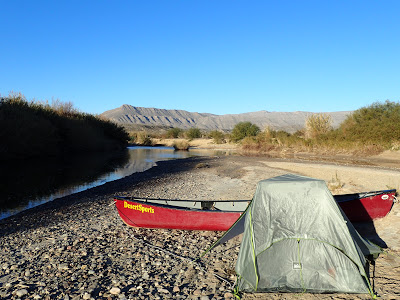 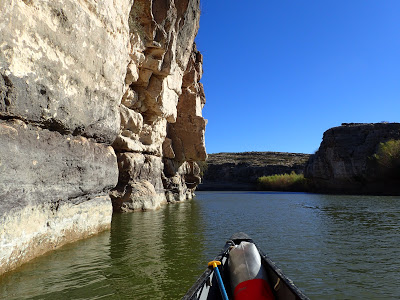 It was a more bitter than sweet last day. It went much like the previous days but it was saddening to think of having to return from an almost euphoric time in the wilderness. The final sections have a few canyon walls and a legitimate rapid or two which were savored.  La Linda is a somewhat recently-abandoned mining town with a defunct border crossing. The bridge still stands though its been blocked off on both sides. Now a ghost town, the Mexican side now has crumbling buildings slowly being taken over by the desert. Apparently it actually still has a few residents though that was hard to see from my view.  So my trip ended unceremoniously at the edge of a mining road on the United States border. My trusty driver arrived right on time dispelling an anxiety I had. Another strange scenario which crossed my mind was thinking what would happen if, by chance, nobody ever showed up to claim me... 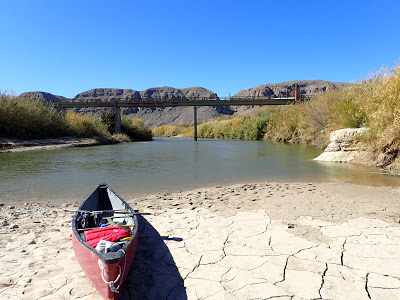 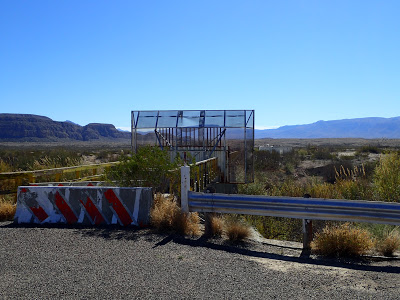 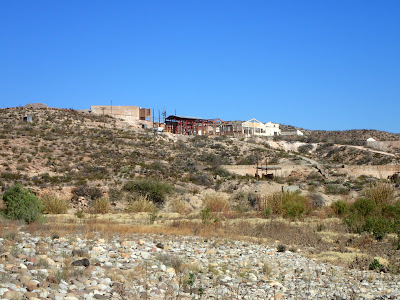 One adventure ended but another future trip was evident just beyond La Linda; The Lower Canyons. The guides tell me that this is the most isolated part of the entire 1,900 miles of the Rio Grande. For about another 80-90 miles, the river continues to divide Texas and Mexico but its an even longer section without any crossings or contact than the previous section I just completed. It takes about 7-10 days to run but no sooner had I finished this trip that I began planning the next.  Certainly there's a lifetime's worth of return trips to the Rio Grand ahead of me.
Big Bend National ParkCanoeingMexicoRio Grande RiverTexas

Thank you for you wonderful blog post. My father and brother rafted this two decades ago, and my son and I will be kayaking it in the next year or two. You brought this experience to life for me. Thank you