The Black Canyon of the Gunnison... it looks and sounds like something out of Lord of the Rings. It really is another "Grand Canyon"- a 2,000ft deep canyon that's only a quarter of a mile wide at some points. The Gunnison River cuts through the Rocky Mountains leaving a deep scar that holds amazing opportunities for climbing, rappelling, and canyoneering. Although it sounds daunting, there are some non-technical, albeit steep routes from the Rim to the River. You don't need ropes, but you do need some solid boots and joints of steel! 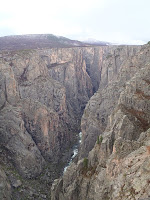 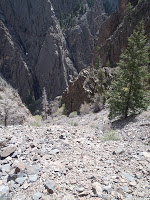 (Left: One of the many vantage points on the rim, Right: the Tomichi Route)﻿
There are several routes down the canyon and each has its own season. You must check-in at the ranger station so you can check the status of each route and develop a plan for descent. Most routes only take a day but some are multi-day descents. Some routes are better when there's snow and ice while others are better in the summer. The Rangers will select a good route for you and you can give them your trip plan. Regardless of your route, the reward of having a 2,000ft canyo﻿n to yourself will make the trip worth it!﻿﻿﻿
﻿﻿#16 Mountain Bike the Slickrock Trail, Moab, Utah

All rise.... it is the Slickrock Trail. It doesn't matter what you've mountain biked before, you're not prepared for the Slickrock Trail. All self-respecting mountain bikers are required to make at least one pilgrimage to the original Mountain Biking Mecca of the Universe. This might not be new information to you, but after mountain biking all across America, I would say that this is really the place to be. Mountain biking across the desert at break-neck speeds up and down slopes you didn't think were possible will put you one step closer to adrenaline-junky nirvana. 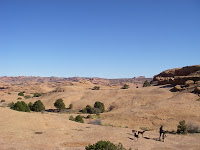 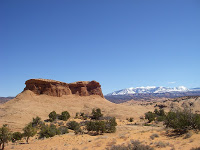 We are not worthy! We are not worthy!
In case you have never heard of Moab let me lay it out for you. Moab is a small city in Southeastern Utah. It used to be a mining town but today it exists simply as a base camp for all things adventurous. Its as much as a white-water capital as it is a mountain biking mecca. Arches National Park and Canyonlands are all nearby. You might have seen this small town in the movie "127 Hours" and the infamous Blue John Canyon is also nearby. As for mountain biking, there is the Slickrock Trail, the equally well-know Porcupine ﻿Trail and about a hundred other trails. One could spend a month in Moab and not do everything there is to do!
#17 Backpack North Cascades National Park, Washington
North Cascades National Park has the distinction of being one of the only parks you can't drive to- you either have to hike in or take a seaplane. Therefore it has the look and feel of Alaska. Massive glaciers and naturally emerald green lakes dot the rugged landscape. Some of Washington's most isolated peaks lie within this wilderness. It is a land that will remain forever wild! My little experience in hiking the Northern Cascades has left me wanting more. I seldom saw another soul and was in good company with all sorts of wildlife. There really are more bears than people out here!
#18 Climb Mt Hood, Oregon
Just South of the... North Cascades is when you get back into seeing the volcanic arc that stretches from Washington to Northern California. Mt Hood is, of course, one of America's most frequently climbed mountains so I won't write much more that what's already written. However I do believe it deserves a spot in America's greatest adventures because it is one of the most likely Cascades to erupt in the next 100 years. Having said that, its a good idea to get the most out of it while it lasts! Not that we should live in fear, but as we've learned with Mt Saint Helens, a mountain can lose over 2,000ft of its height with an eruption! At any rate, climbing Mt Hood is just one of the many activities of the mountain. For example, every year intrepid skiers design trails which circumnavigate the mou﻿ntain which is harder than it seems! There's also the 41 mile Timberline Trail which is a hiking trail circling the mountain. Skilled trail-runners can complete this trail in under 24 hours but it also makes a great backpacking trip!
Fall Trip Report of Hogback Rt on Mt Hood
Summitpost Page on Timberline Trail
#19 Ski/Snowboard the most Bad-Ass Runs at Lake Tahoe
Lake Tahoe is home to some of the greatest skiing/snowboarding on Earth. Its become an international destination and even Europeans will forsake their Alps once in a while for a chance to ski Tahoe. I lived near Tahoe for nearly 10 years and got to be a "double-diamond" boarder. I have an opinion on every single resort on the lake and I've come up with some of the more harrowing runs that you wouldn't think were actually at a ski resort-
Continue reading with-
Best Outdoor Adventures in America: Part 5
Read. Plan. Get Out There!